The world’s first algae-powered building has just been completed in Hamburg, Germany. The outside of the apartment complex is covered in green slime, generating heat and biomass.

The world’s first algae-powered building has just been completed in Hamburg, Germany. The outside of the apartment complex is covered in green slime, generating heat and biomass.

It’s terrific news that algae can be put to such a useful purpose, but I have to admit that on a personal level I find this a little upsetting. I had previously placed algae on the short list of “life forms that are lazier than I am.” I mean, what has algae ever done besides star in Ghostbusters and clog up my fishtank?

Except now it’s covering the 2,150 square foot exterior of an apartment building, allowing the building to grow its own energy.

The building in question is the Bio-Intelligent Quotient (BIQ) house, built by the IBA Hamburg, and they have declared their building to be the first in the world to have a bioreactor facade. Algae photosynthesize in the sunlight and nutrients and carbon dioxide flow through a tube along the wall, providing everything the algae needs to grow. 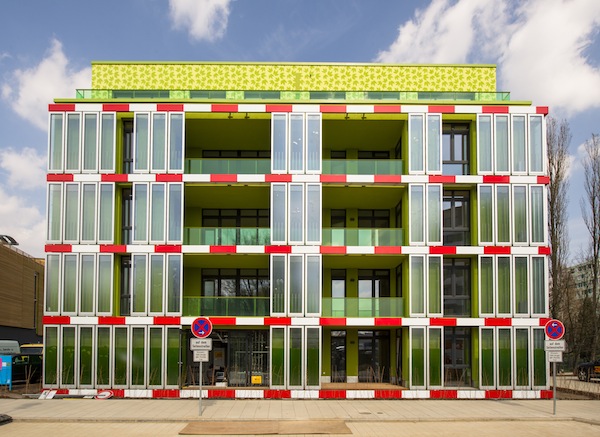 Once the algae have done enough growing, it is harvested and fermented to create biogas, which is used to heat the building.

What is interesting about the building is that it makes no attempt to soften or downplay its status as a renewable energy super-home. The unmissable green walls make sure of that.

As I read the initial press release I was prepared to file this one under “cool new renewable energy” – and in some ways it undeniably is – but the technology itself is nothing terrifically advanced or complicated: algae is well-known as an excellent and fast-growing source of biomass, capable of producing 4000 to 18,000 litres of oil per acre. It’s the audacity of the idea that really stands out: taking a slime normally associated with rot and decay (à la my poor fishtank) and showing it off as if it were expensive siding.

Algae siding is the perfect example of primary problem that plagues renewable energy: it’s an effective, efficient and sustainable technology so how do we get the public to embrace it en masse? Materials less viscerally offensive than algae have met their doom at this stage of development; mired in the quicksand of lukewarm public opinion and lacking the momentum necessary to take a real run at the economies of scale which might propel them into widespread use.

It’s not easy for a new technology to enter the world of popular renewable energies. If windmills make people feel sick, it’s not hard to imagine they might get a little queasy at the sight of a neighbour’s slimy house.

Perhaps better to think of it this way: if useless green slime can be slapped onto a wall to power a building, there is surely no end to the list of renewable energy possibilities. It is simultaneously comforting and frustrating that these sustainable technologies exist and aren’t being widely implemented.

The BIQ house may well have latched on to the best way forward: instead of trying to be subtle about the algae, be bold! Be proud of the slime! If algae walls become fashionable we could add new meaning to the idea of green cities.