I used to be scared of bees. As a child I panicked and ran away screaming from bees during recess. Usually, the bee was just chillin’ on a dandelion. I know now that the bee was probably just minding its own business, collecting pollen from flowers.

I used to be scared of bees. As a child I panicked and ran away screaming from bees during recess. Usually, the bee was just chillin’ on a dandelion. I know now that the bee was probably just minding its own business, collecting pollen from flowers.

Honeybees as a species were imported into North America in the early 17th century. Humans have been keeping hives for centuries, to help with the pollination of plants and to harvest the honey these bees make. There are over 4,000 species of bees that are native to North America, none of which are domesticated like the honeybee.

More and more people these days are getting into hobby beekeeping and starting their own, non-professional beehives. I visited two beekeepers in Waterloo Region in Southern Ontario and learned about how they started their hives. Melissa has been a beekeeper for around two years and Marco for about one.

In recent years, colony collapse disorder (CCD) has emerged as an environmental crisis. Beehives are dying at alarming rates which consequently puts our food supply at risk. Pollinators like honeybees fertilize flowers and enable the creation of seeds and fruit. Pollinators aid in the production of one third of the world’s crops. Colony collapse disorder clearly indicates that the health of honeybees is at serious risk.

Pesticide use and mono-crop farming are factors linked to CCD. Keeping honeybees without conventional pesticides is just one way to help pollination of nearby plants. Natural beekeeping practices include not using pesticides in the beehive for mites, or on the fields surrounding your hive. 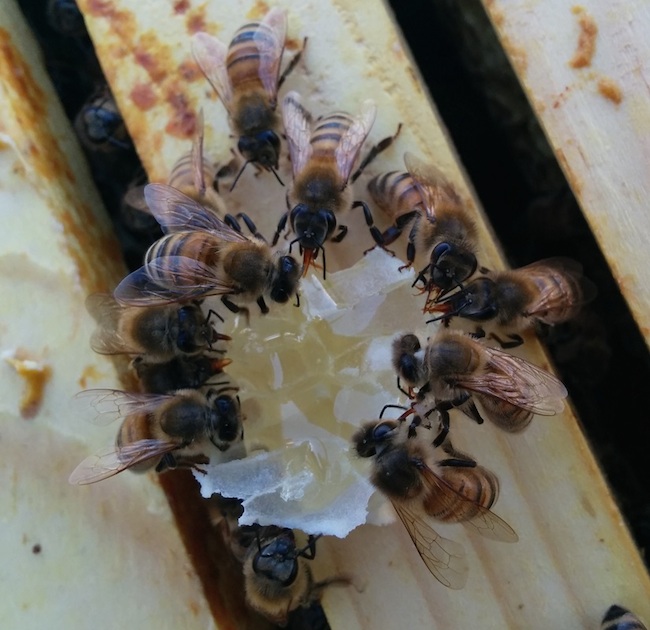 If you are interested in beekeeping, start by educating yourself. To get an overview of honey bees and the problems they face today, start by watching these films: More Than Honey (2012), Queen of the Sun (2010) and Vanishing of the Bees (2009).

There are lots of books about beekeeping and you will probably want one comprehensive book for your library. Most geographical regions also have a beekeeping association. Look up your local association and get connected; here’s a list of Beekeepers Associations in Canada (and some more links here). Many of these associations have a mentorship program for new beekeepers. Learn from local beekeepers about how the honey bees are faring in your region. You may also be able to buy your first nucleus colony through other beekeepers in the association.

A simple thing anyone can do to help bees is to provide food by not plucking your dandelions, or plant other bee-friendly flowers. You can also get involved in taking political action to push for better regulations on pesticides that have not been proven safe for bees. In Ontario, the government is starting a consultation process on pesticide use and their link to the health of honeybees, and will be restricting the use of neonicotinoids starting this autumn.

RELATED: Read this before you yank out that dandelion.

So whatever your interest in helping honey bees, the next time you see one buzzing around your garden, don’t panic, and be glad the bees are helping our food grow. We couldn’t do it without them.

Janice is a spoken word artist, musician, community organizer and Waterloo Region’s resident “poet-provocateur.” Janice hosts a video blog series about how you can be a do-it-yourself (DIY) environmentalist.
janicejolee.ca | @JaniceJoLee