3 hours ago
Carbon and Conservation
2 months ago
When the Sky was a Different Colour
2 months ago
The WTF: The Week This Friday Vol. 62
3 months ago
Can You Hear Our Earth Dying? – Journalism and the Environmental Movement
3 months ago
A Word from Our Founder, Time Flies – A/J Pilot Issue Revisited

What began as an idea between two classmates nearly two years ago has become one of the most innovative and environmentally sound student organizations on the University of Waterloo campus. The UW Aquaponics Design Team (UWAQ) began modestly in September 2011, but with research, dedication and a lot of hard work they have been able to reach their initial goal: to complete a functional aquaponics system.

What began as an idea between two classmates nearly two years ago has become one of the most innovative and environmentally sound student organizations on the University of Waterloo campus. The UW Aquaponics Design Team (UWAQ) began modestly in September 2011, but with research, dedication and a lot of hard work they have been able to reach their initial goal: to complete a functional aquaponics system.

Aquaponics combines aquaculture (raising fish) with hydroponics (growing plants in water instead of soil) to form a sustainable food production system. In aquaculture, fish produce waste that accumulates in the water, making it toxic for the fish. Therefore, the water has to be replaced regularly. The science behind aquaponics is that the waste produced by fish turns into nitrates, which are a good plant fertilizer. The nutrient-filled water from the fish tank is then led to the hydroponic system where the plants absorb the nutrients and purify the water. 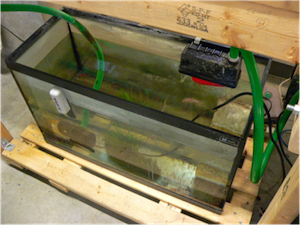 Douglas Thoms, president of UWAQ, describes aquaponics as “a very simplified ecological system that will keep on recycling its waste.” Thoms, a co-founder of the club and third year mechanical engineering student believes that the primary benefit of using aquaponics is that it allows humans to grow plants without cutting down trees and polluting the soil, and to raise fish without disrupting marine habitats.

An aquaponics system can be established in any part of the world, as it is not dependent on season, a major factor in determining food availability. This agricultural technology is also less wasteful than traditional food production, explains UWAQ’s Internal Communications Coordinator, Varun Jacob-John. “It’s a great way to save a lot of water in comparison with other food production and it’s completely organic – no chemicals are added to our system.” Agriculture is known to be a massive consumer of the world’s water supply, using 70 per cent of global withdrawls. Although initially reliant on water, Aquaponics systems do not need to be watered regularly. The UWAQ system requires less than 4 litres to be added to the fish tank weekly. 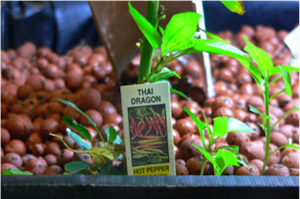 The completely student-run design team is made up of 15 volunteers, all University of Waterloo students from various academic backgrounds. The project may have started with engineering students, however the current members come from several programs, including Math, Social Work and Bio-Medical Science. Thoms and Jacob-John both stressed the interdisciplinary nature of Aquaponics, agreeing that the team requires a variety of different skill sets. The members have different tasks within the club, some responsible for research, others for maintaining the current aquaponics system and designing a second one.

The design team’s initial goal was to build a 30-gallon (113.5 liter) system, which took them about a year and has been fully functioning for 6 months. The team continues to add improvements, but say they are now working towards building a new, larger system. “Since it’s our first system, it’s more of a learning system,” says Thoms. The group has used their first system as a research tool to learn the ins and outs of Aquaponics, before using their resources to start work on a larger system. The plants grown in this first system have been small, and just two small goldfish in a tank beneath the plants provide fertilizer. They hope their second system can provide data for  use in future research. The team says they’ve already been approached by researchers looking for data. 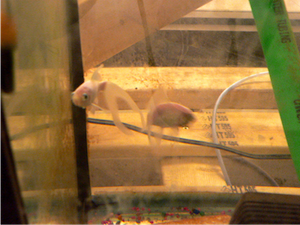 With a new system in mind for the long term, the team’s short-term plans involve informing students about aquaponics technology. On Saturday, March 9th, the organization held a Food for Thought workshop, to promote sustainable and environmentally-friendly food production and provide information on building an aquaponics system.

As for the future of UWAQ, Thoms noted that they are a young organization that will need to work on building and setting up the right policies and organizational structures for the team. As far as plans go, Thoms and Jacob-John both agreed that the team will definitely build a bigger system. “We want to apply some of the things we’ve learned,” Thoms said.

University of Waterloo Aquaponics can be found in the Engineering 5 building on the school’s main campus. They are always looking for more students to get involved. Visit their website for more information.

Megan is A\J’s editorial manager, a lover of journalism, and graduate of the University of Waterloo’s Faculty of Environment.