A British startup has figured out how to produce gasoline from air and water.

A British startup has figured out how to produce gasoline from air and water.

The initial output of five litres after two months of work isn’t likely to fuel your SUV much further than the closest Tim Hortons, but it’s a start. The air-fuel synthesis process works like this: Air is blown into a tower that separates and stores hydrogen and carbon dioxide. The two are then reacted together to form methanol. The methanol is then passed through a gasoline fuel reactor to form petrol.

Creating anything out of air and water is exciting. In a world where quantities of coal, oil and natural gas are all diminishing rapidly, filling the energy gap is an absolute imperative. Doing so in a way that uses renewable resources while contributing nothing to climate change would be a terrific coup indeed.

“Air capture technology ultimately has the potential to become a game-changer in our quest to avoid dangerous climate change,” says Tim Fox, head of energy & environment for the Institution of Mechanical Engineers.

The world is constantly on the lookout for a game-changer. The political vitriol surrounding our current renewable energy technologies can’t help but inspire longing for a “silver bullet” capable of cutting through political and economic objections from all sides.

“What we need now,” says Fox, “is the financial and political support to help turn this revolutionary demonstration into a large-scale industrial solution that could make sustainable products, remove and store CO2 from point sources or the atmosphere, and set the international carbon price to drive innovation across all clean technologies.”

Below is the lifespan of a successful energy technology. What Fox describes are the inputs (financial and political support) necessary to propel a technology to the top of the curve. 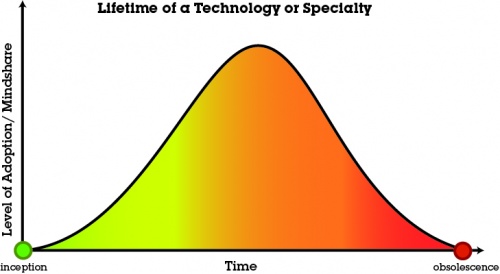 Let’s pretend the curve is a real hill. We’re going to walk up and down it, beginning from the bottom right. All of the energy technologies of the last century are dispersed along the curved pathway. At the finish line, as it were, are energy sources that are past their prime as global game-changers: wood, for example. Fossil fuels cluster near the top, ambling towards their downward slope. The real crowd is right at the beginning. Here, nuclear fusion, sea-water electrolysis, hydrogen fuel cells and a mass of others struggle to get themselves out of the starting gates, tumbling over one another to gain a little traction. But there are no shortcuts up the hill.

It seems the minor political and financial boosts needed for this uphill battle are more difficult to amass than it would first appear. It’s the nature of the news cycle that enthusiasm for a big idea is eventually pushed aside for the next. I would like to suggest, however, that the siren call of the “game changing” renewable energy has a role to play in reducing public patience for technologies which fail to immediately build on enormous initial promise – an expectation which the history of energy technologies demonstrates to be quite unrealistic.

No technology – no matter how clean and sustainable – can bypass the need for enormous political and financial support to get even a little ways off the ground. Failure to do so doesn’t mean the technology is flawed, though no energy source is perfect.

Public support for any renewable technology is perhaps best achieved through “early adoption”– using the technology as soon as it becomes publically available. Electric cars, for example, are still in the early adoption phase. Early adopters are what boost any new technology up the hill.

A recent comment on Christian Science Monitor nicely illustrates why we need to put support behind exciting new technologies: “With the quality of the minds working on it, and with the clear benefit that limitless power would bring, this seems like a ‘Hail-Mary’ pass that we should be investing in. Someday, we will realize [this technology] as a limitless, safe, clean energy.”

And while it could apply equally to air-fuel synthesis, this was in fact a commentary on nuclear fusion. As the joke goes, fusion is the energy of the future, and always will be. If air-fuel synthesis continues to show promise, then let’s hope it doesn’t end up the butt of the same joke.