History lessons serve as a starting point to understanding what once was — that is where cartographer and activist Aaron Carapella is trying to make a difference. Carapella, a Native American descendant from Oklahoma, has spent years creating a Tribal Nations Map Series currently being used by hundreds of native and non-native schools within the United States, including the University of Montana. The first of its kind, the maps show the Americas before colonialism.

History lessons serve as a starting point to understanding what once was — that is where cartographer and activist Aaron Carapella is trying to make a difference. Carapella, a Native American descendant from Oklahoma, has spent years creating a Tribal Nations Map Series currently being used by hundreds of native and non-native schools within the United States, including the University of Montana. The first of its kind, the maps show the Americas before colonialism. They display traditional names and show tribal territories without political boarders. 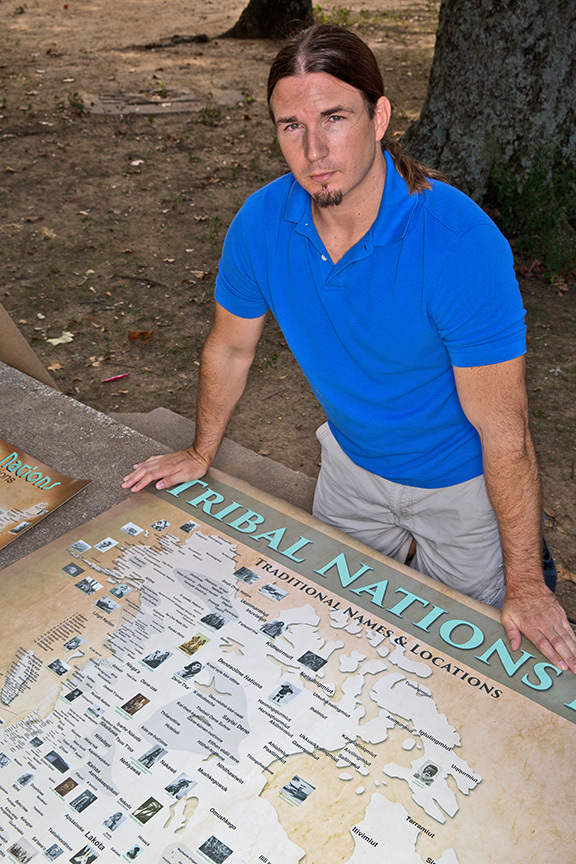 At an early age, Carapella went out of his way to be involved with indigenous peoples — he lived outside the native community. He attended local tribal meetings and council meetings for tribes that fought for federal recognition just to understand what it means to be a Native American living outside the community. He even joined the American Indian Movement and participated in land occupations and protests. While visiting different communities he saw a “real lack of respect for traditional names of tribes,” which is what inspired him to create the Tribal Nation Map series. Accurate visual representation of the once diverse and prominent culture is a way of reminding people “a set way of life existed before outsiders took over, before we started writing the history of this continent from the victor’s perspective,” says Carapella.

It is no secret that when the European settlers first arrived, they brought with them disease and violence that wiped out a substantial portion of the Native population resulting in lost culture. Today the general public has a distorted opinion about the original inhabitants of this land and according to Carapella it is due to misrepresentation of the remaining native community, such as “insulting racial mascots.” It has gotten to a point where some native descendants themselves use “names given to them by outsiders, which is offensive to the native community.”

“Losing your name is one facet of why there has been a break down in traditional way,” Carapella said, which makes seeing their tribe names on maps for the first time even more powerful.

Carapella donates his work to underfunded schools and has special pricing for teachers. He believes that when teachers and professors begin to incorporate them in their teaching material, as they have gradually begun to do so, the timeline of history will change. Carapella hopes that children will no longer grow up thinking of their land as young and new but a land with a rich history of unique customs stemming from the millions of people that lived prior to colonization.

Carapella has visited over 250 native communities within the United States in addition to those in Canada, Mexico and Puerto Rico. He believes in getting the information right from the source and incase of a dispute he always has given the last word to the tribes. It is a volatile subject, he admits, and he tries his best to remain neutral and not offend anyone in the process.

The mapmaking has hit a few roadblocks with getting in touch with remote tribes, some in Alaska and Upper Yukon area. Carapella’s research also includes accounts by explorers, anthropologist and people from the tribes who have written books about their own histories. Some of his most challenging work has been to do with “Nomadic” tribes, tribes that seasonally change location, although he does have issues with the term itself.

Carapella’s next big project is to work on a 100×50 inch map of the entire western section of the globe. He will work closely with his graphic designer to combine all his maps published so far ensuring their historically and geographically accuracy. Among his smaller projects, he will be working to create regional maps for tribes in California. This project will allow him to add more detail and break down tribal territory into subtribes and villages.  He is also expanding his reach by working on an interactive map that will give more details and correct pronunciations of the tribes as well as links to important issues and websites that can help people learn more about native history.

While talking about current government involvement, he says that although the Bureau of Indian Affairs (BIA) of the United States recognized 567 Native American Tribes, there are over additional 200 tribes that are fighting just to prove their native ancestry in the United States alone. Federal recognition is one way to keep them from being obliterated from the pages of modern history. Having a map with traditional names and territories is a step towards “uplifting their spirit” and restoring Indigenous hope.

Visit his website to learn more about Aaron Carapella’s work and to purchase his maps.