Sarah Common, Chief Community Officer at Hives for Humanity, founded the organization with her mother, Julia in 2012. It was the result of Common placing a hive in a community garden she was working in.

“I was looking for ways to make the garden more meaningful to the community, and create more opportunity for community ownership and engagement to try and enliven that space” says Common. As a result, she was able to hone her mother’s beekeeping skills and allow them to share their skill sets with a community that wouldn’t have otherwise had the opportunity to be in a garden with bees and learn how to bee keep. 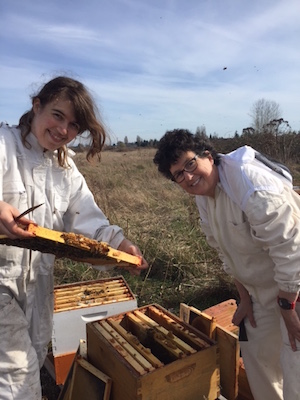 After placing the hive in one garden, they found that many community members we’re taking ownership of the bees, protecting, observing and caring for them. They received a lot of questions from community members asking about opportunities for them in the following years.

“Most people in this community are focused on the moment and survival in the present,” says Common. “Hopeful thoughts of next year are essentially a luxury.” They decided to honour those requests and continue to support the at-risk communities of people and pollinators.

Downtown Eastside of Vancouver is where their core work takes place and the future location of their Bee Space, a retail storefront for the organization. There are many factors that contribute to the poverty, homelessness and unstable housing that occur in the DTES Common said. One of the things that those factors tie back to is the experience of trauma. Their Therapeutic Beekeeping Program creates a positive and supportive environment that fosters self-worth and pride.

“It brings people to leave behind their emotional baggage, trauma and chaos they carry with them and leave that behind when they enter the apiary,” says Common. “When they come into this place, they’re focusing on the vibrations of the bees, the smells of the hives and caring for this living, breathing system.”

The therapeutic powers of the hive and the gardens are not limited to those who have experienced trauma. Common stresses that it is a therapeutic experience for all. Everyone has stress and the bees provide an opportunity to relieve that stress.  “That experience of understanding how interconnected to every is universal no matter what you’re doing in the apiary,” says Common.

One of the things they’re finding is how empowering it is for people in the DTES community to be taking leadership roles, becoming environmental stewards and making substantial differences for the bees through the provision of habitat and forage. “People in this neighbourhood are used to being marginalized and pushed aside.” Common continues that for them, by taking on meaningful roles and creating change, it becomes a positive experience for the community to know they can be an ambassador for the bees and help relieve some of the bees’ struggles.

After building connections with people and communities, Common has found that through the winter months, reestablishing those connections can be difficult. “A lot can change in three days for people in this community, let alone three months,” says Commons. The Bee Space would provide a year-round location for Hives for Humanity and the community and allow the organization to achieve financial sustainability. They would be able to offer employment and volunteer opportunities, host workshops and feature their products.  The Bee Space would be a huge opportunity for them to ground themselves in the community. Currently, the City of Vancouver has granted them $25,000, provided they raise the other half of the $50,000 needed to build the Bee Space.

“It’s opportunities that create lasting change and empower someone to take a new path that make’s them feel good and valued,” Common said. “It’s that piece of self-worth that makes a difference in recovery, healing and moving forward. That is the core of everything we’re doing, which is creating self-worth in individuals and building community pride.”

Their goal is to keep outreaching, engaging and building the sustainability of their programs in different communities to create a connected group of apiaries in and around the city. In the future, Common and her mother hope to grow the organization and have hives set up in communities around world.

Support Hives for Humanity’s Bee Space by donating to their crowd funding campaign. Follow their initiatives on Twitter and visit their website to learn more about the organization.

Eunize Lao is the Editorial Intern and a third-year Environment and Business student at the University of Waterloo.