The lights change but nothing moves. The truck blocking the intersection is also blocking the crosswalk, so I thread my way around bumpers and continue up Yonge. It’s the afternoon rush in Toronto. At this time of day, the sound of the city isn’t the rush of air from passing traffic, but the rumble of engines crawling inch by inch through this enormous concrete grid.

The lights change but nothing moves. The truck blocking the intersection is also blocking the crosswalk, so I thread my way around bumpers and continue up Yonge. It’s the afternoon rush in Toronto. At this time of day, the sound of the city isn’t the rush of air from passing traffic, but the rumble of engines crawling inch by inch through this enormous concrete grid.

There are people – perhaps you are one – who feel the slow squeeze of cities pressing in. Until recently, the dilemma was that to get out of the city and escape this crush of vehicles, you had to be part of the problem and own one yourself. But three years ago, Alex Berlyand and Boris Issaev created ParkBus, providing direct, car-free transportation to some of Ontario’s parks.

It seemed obvious when I saw a brochure for it. It’s a bus that takes us camping. Do people without a vehicle just never go? There has to be a huge demand for this sort of thing in a city like Toronto.

But it really is a first of its kind, in Ontario at least. For the massively popular parks in the Rocky Mountains, Banff and Jasper, there’s already Greyhound. But that’s mostly because there are decent-sized towns just outside the park gates. Places like Algonquin Provincial Park and Bruce Peninsula National Park are isolated attractions in a sea of wilderness and farmland.

So, early one Saturday morning, I join a small mob of sixty people crowding the sidewalk at a pickup spot for the ParkBus heading to Bruce Peninsula National Park. Most have just a single large backpack in the way of gear. There’s a reason: 30 cars have a lot more storage than a bus. There’s room underneath for a couple bags per person and one or two bikes, if you tell them in advance.

This goes some way to explaining the dominance of car-camping. It’s convenient to bring whatever suits you. Millions of Canadians each year toss whatever fits their style of camping into a trunk, fill up with gas, and drive to a park.

But for ParkBus travellers, their tent and sleeping bag make up most of their belongings. Since the whole point of ParkBus is to leave the car behind, getting a lot of gear to and from the pickup point in downtown Toronto can be a challenge. 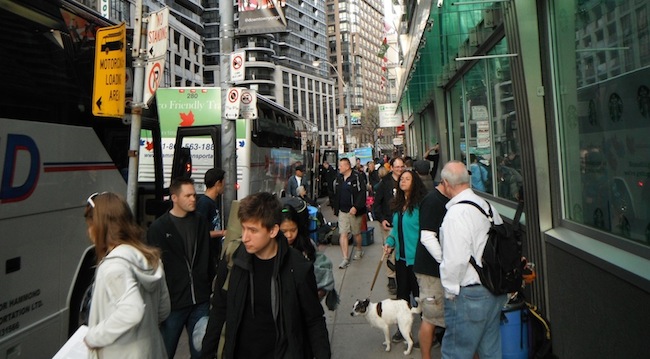 We board. It’s a comfortable, modern coach bus. The bus they get depends on the number of people going on the trip. They size up from 15- to 24- to 32- to 56-seaters as more people buy tickets. There are 38 on ours, not counting Alex Berlyand’s two dogs (you’re welcome to bring yours too).

It’s the first run of the season, and they’re looking to expand fast. They need 1,200 customers this year, and Boris Issaev thinks they’ll get it. They have grants to make up a deficit this year, but next year they must be self-sufficient. It’ll take 2,000 passengers for that.

We pick up a few more riders at Dufferin and Bloor, then glide smoothly onto the highway. There’s a 15 minute stop at a Tim Hortons in Orangeville. In line, I talk to Amar. He saw an ad for ParkBus on Google and thought it would be more convenient to have someone else do the driving. He figures it would have been $80 for gas anyway and his car would just sit in the parking lot the whole time – he’ll be at a backcountry site in the park called Storm Haven.

Back on the bus, we trade traffic for trees as the road narrows to a lane each way. Towns of a few streets slip behind us in orderly succession, fields filling the gaps between them. There are three destinations: Lion’s Head, Cyprus Lake and Tobermory. All three are far enough apart that unless ParkBus riders hitchhike, they can only experience one. This is also true for routes to Algonquin and Killarney. Each destination has enough to do for a weekend, so it’s not much of a complaint to have options for where you’ll get dropped off.

New this year, the municipalities are partnering with Parks Canada and a local business to offer a shuttle between Tobermory and Cyprus Lake campground. The park is also planning more bike trails and even bike rentals, which would add one more option.

The park is popular enough for this to make sense. Camille, a Parks Canada manager, tells me that attendance has grown from 150,000 to 250,000 in the last five years. That’s enough to turn a profit from admissions alone, which is unusual for our national parks – most are heavily subsidized.

ParkBus isn’t meant to add to these numbers. They want it to replace some of the cars so there’s less traffic, less demand for parking and less pollution. Even if Alex and Boris can pull off their 2,000 passenger goal next year, that’s still a tiny fraction of visitors to parks in Ontario. I wonder what else can be done to ease the pressure of growing attendance. 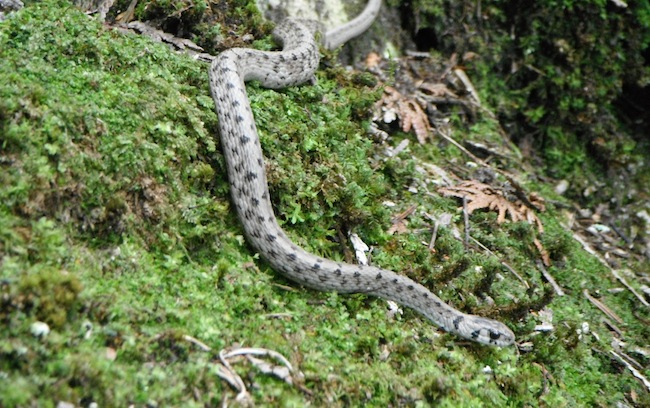 There is a catch-22 to enjoying nature. Surely a big reason we preserve vast tracks of wilderness is because of the need to experience it, but we do harm when we get too close. We brand it with roads, breaking up habitat into little rectangular parcels. We wound it with trails, trash and greenhouse gas.

Still, the sigh of trees soothes nerves frayed by the din of big cities. After supper, the fire burns down to a low glow. The sky’s blue deepens to reveal stars. The light changes and nothing moves.

Ben is a former A\J editorial intern. He’s currently a freelance writer based in Ottawa. He tells stories about nature, science and policy.

Ben is a former A\J editorial intern. He’s currently a freelance writer based in Ottawa. He tells stories about nature, science and policy.