It would take more than 200 days to walk across Canada. More if you stopped at New Brunswick’s illustrious Potato World Museum.

It’s understandable then, that the quintessential trans-Canadian roadtrip involves a beat up old Honda Civic, rather than a sturdy pair of walking shoes.

It would take more than 200 days to walk across Canada. More if you stopped at New Brunswick’s illustrious Potato World Museum.

It’s understandable then, that the quintessential trans-Canadian roadtrip involves a beat up old Honda Civic, rather than a sturdy pair of walking shoes.

But even between proximate cities it would be almost unthinkable to travel by other means when one has access to a personal vehicle. Heck, there are only a handful of Canadian cities (mainly the very large or the fantastically tiny) in which cars are not the primary means of transportation.

All this to say that Canada has a car culture. The frequent referencing of cars in our most nationalistic beer ads serves as exhibit A.

In a dreamland of complete environmental responsibility, our ideal Canadian transportation system has a national public transit strategy, greenbelts which promote urban density and of course, electric cars. 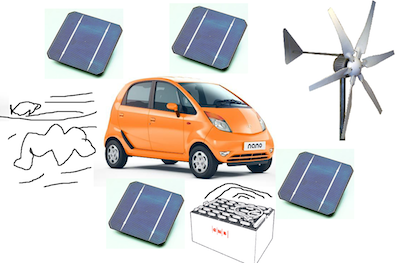 ALL THE ELECTRIC CARS!!!

Which is a lot of pressure to put on one technology when it’s up against such a firmly entrenched socio-technical regime as the gas-combustion automobile in a car-obsessed country.

Better to stack the odds in our favour by diversifying our strategies and supporting a wider range of complementary and discrete technologies. As it happens, the transportation system offers a number of openings for renewable energies to increase our overall sustainability.

Highways allow cars to pass, but otherwise they just sit there uselessly, collecting roadkill and old tires, like someone’s weird uncle. A startup from Idaho has proposed putting roads to work by laying solar cells on top of them. The cells would sit under a layer of glass, which is strong enough not to shatter, but clear enough to absorb sunlight. Theoretically, a highway could provide the charge for the vehicles that drive on it.

Meanwhile, in Utah, a company called WAVE has pioneered a technology which allows electric vehicles to charge wirelessly. The name stands for Wireless Advanced Vehicle Electrification and pilot projects are already powering buses and shuttles around the city, with magnetic induction units sending a wireless charge to the vehicle’s batteries.

It has also been proposed that the rush of wind from cars zipping along the road could spin wind turbines, generating electricity from each passing vehicle. The prototype designer describes his model as “part modern sculpture, part green technology and part weird.” There are worse combinations out there.

A similar proposal has been made involving solar panels in India. Scientists there hope to cover a 205km highway with solar panels on elevated platforms. And some cars now come with solar panels built right into their own roofs, which leads to the possibility of several layers of solar collection as sunlight shines down onto the roads of the world.

A car with solar panels on the roof will save several hundred kilometres worth of gasoline per year – a drop in the bucket. However, a car with solar panels driving on a solar highway with panels above and below, generating wind energy while also recharging wirelessly? So many renewable technologies working at once stand a better chance of making a major difference.

The biggest challenge is giving them a shot. Like a sports team drafting a young athlete, we’ve been banking on electric cars to save our franchise without any support. Developing other technologies gives a better chance of success.

In the long term we may be able to make a dent in the average Canadian’s reliance on cars. In the meantime, let’s build a transportation system in which it won’t matter.