It took me three flights, one train ride, two motorcycle trips and a long trek up the volcano before I saw the mine for the first time. I met Imam, a former sulphur miner, at the train station in Rogojampi, Indonesia, after 48 hours with little sleep. We jumped on his scooter and were overloaded with my huge backpack and another suitcase, but this didn’t stop us from having a refreshing one-hour ride to his small village.

It took me three flights, one train ride, two motorcycle trips and a long trek up the volcano before I saw the mine for the first time. I met Imam, a former sulphur miner, at the train station in Rogojampi, Indonesia, after 48 hours with little sleep. We jumped on his scooter and were overloaded with my huge backpack and another suitcase, but this didn’t stop us from having a refreshing one-hour ride to his small village.

I went to bed in a small house between cocoa-plantations, banana trees and rice fields at 10 pm and woke up at 3 am. The mosques and cocks in the surrounding villages were screaming and the sun was already rising. After a spicy breakfast, we started our journey to the volcano.

The 2,600-metre Ijen Volcano in Eastern Java is still active. Locals and tourists come here to see the five-metre-high blue flames at night and watch the sulphur miners working. Almost everyone stops at the plateau on the eastern face of the volcano where a sign warns, “Visitors are prohibited going down on crater – dangerous.” Many can’t stand the smell and turn back after only a few minutes. The view from up here and the gases from down there are breathtaking.

The quietly active volcano emits sulphuric gases through openings in the south-east side of the crater. Local miners capped these fumaroles on the southeast side of Ijen’s crater in 1968, and channeled the gas through ceramic pipes up to 10 metres long. The sulphur condenses inside the pipe network, and drips into barrels as a very hot red liquid. As it cools, it turns first orange, and then into a yellow, rock-hard solid.

Once you head down from the rim, the awful smell hits you and you can hear miners coughing and moaning as they inhale toxic fumes and carry baskets full of heavy sulphur.  Poisonous gases like hydrogen sulphide and sulphur dioxide burn their lungs and eyes. Some pass out when the oxygen level gets too low. In the past, workers have choked to death in the clouds of toxic fumes.  My gas mask wasn’t leak-proof, and I continued coughing weeks after my time in the crater. The sight of a miner smoking a cigarette struck me as odd, since we had been surrounded by smoke all day, but he told me the taste (tobacco mixed with cloves) was the only way for him to get rid of the sour taste from the volcanic gases.

Workers come from the nearby villages and cities like Tamansari or Banyuwangi. Some stay in simple dwellings at Camp Sulfutara, so they don’t have to make the hour-long trip to Ijen every day. Most workers start at the trailhead at five or six in the morning. In the end each trip takes about four hours. Rain can make the treks less walkable and bad winds inside the crater can make work impossible.

The miners use simple tools such as stones, steel bars and shovels to harvest the cooled, brittle sulphur, smashing it into manageable sizes for their baskets and bags. It is up to individual miners how much sulphur they want to carry…. They’re paid according to how many kilograms they bring down to the sales point (a two-hour trek). An average 80-kg basket of sulphur – some weigh up to 90 – would be exchanged for $5.84. (One kilogram of sulphur was IDR900, $0.073 in October 2014. ) Most miners make this painful trip twice a day.

Few miners have protective clothing and equipment, so many are seriously injured in this dangerous environment.  The paths up and down the volcano are slippery and rocky. Miners carry their heavy baskets on bamboo sticks, which can only be balanced on one shoulder, causing musculoskeletal deformities.  Gas explosions killed 49 workers in 1976 and 25 in 1989. These eruptions also sent acid flying out of the crater, damaging local farms.

The Ijen crater’s acid lake, the largest in the world at 1,000 metres wide and 200 metres deep, has a pH of 0.5 (or lower, depending on rainfall) – the same as battery acid. Though the water has a beautiful blue colour, due to its high amounts of alum and gypsum, it eats through metal and dissolves clothes, and its sulphuric and hydrochloric acid vapours cause serious respiratory problems for the miners.

Indonesia’s rapid economic growth hasn’t made life in the small villages that surround Ijen easier. Inflation since the 1998 Reformation has lowered farmers’ income, but the prices of basic necessities are rising. One miner I spoke to said he worked in the sulphur mine because his income as a farmer, working five days a week, would only be something like 30,000IDR/ day (about $58 a month).  He can make it to the sulphur mine once a day, carries 60kg of sulphur and usually works four days a week. Minus the cost of gas for his commute to work, a miner who makes it to the sulphur mine twice a day, carries 80kg of sulphur each time and works four days a week would earn $215 each month.

Most sulphur mined at Ijen is used to bleach sugar by a local factory. In other parts of the world, sulphur is used to vulcanise rubber and produce pesticides, paints, plastics, batteries, gun powder, explosives, matches, paper and cosmetics.

There were sulphur mines until the late 19th century in countries such as Italy, New Zealand and Chile, but dangerous eruptions led to their closure. Artificial chemicals can and do replace sulphur in many industrial processes, so it could be just a matter of time until this mine is closed.

Sulphur blocks at Syncrude base plant \ by jasonwoodhead23 on Flickr \ CC BY 2.0

While Indonesian miners are (literally) breaking their backs carrying sulphur out of volcanic craters, Syncrude is building the world’s largest pyramid out of its own excess sulphur because the company can’t find anything else to do with it.

Bitumen mined in the Alberta tar sands is so thick that it must be treated before it can be shipped through pipelines and used to produce functioning fossil fuels. One of the byproducts of this treatment process is sulphur, and as a result, Alberta is now home to sulphur mountains larger than the Great Pyramid, which stands at 2,580,000 cubic meters. Syncrude’s stacks were estimated at four million cubic metres in 2013. That’s around eight million tonnes of sulphur and the pile is growing quickly – the total oil sands sulphur output for 2015 is predicted to be 4.1 million tonnes (though how much of that is Syncrude’s is unclear).

The excess sulphur – which releases toxins that damage the brains, hearts and kidneys of humans and animals – could cause problems for surrounding communities, including Fort McMurray and Bruderheim.

Sulphur can be used to make a number of consumer products, including fertilizer, batteries, detergents and matches, but Syncrude has not yet found an economical solution to its oversupply.

The Ijen Volcanic Sulphur Mine in Photos

Click on any image to view as a slideshow. 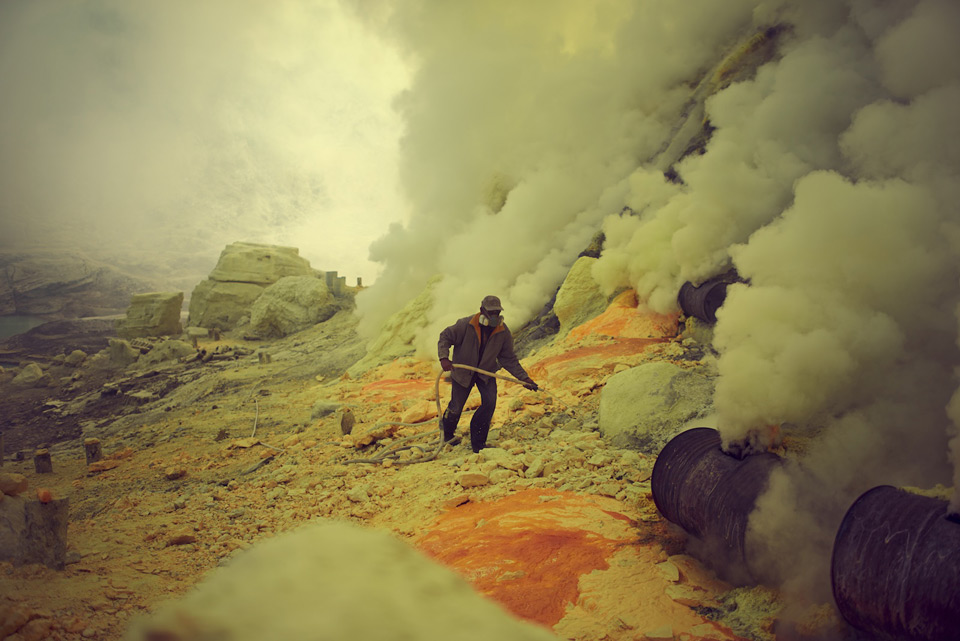 The channeled sulphur condenses and drips out of the barrels as red and hot liquid. As soon as the red sulphur cools down, it hardens and turns into famous vibrant yellow colour. 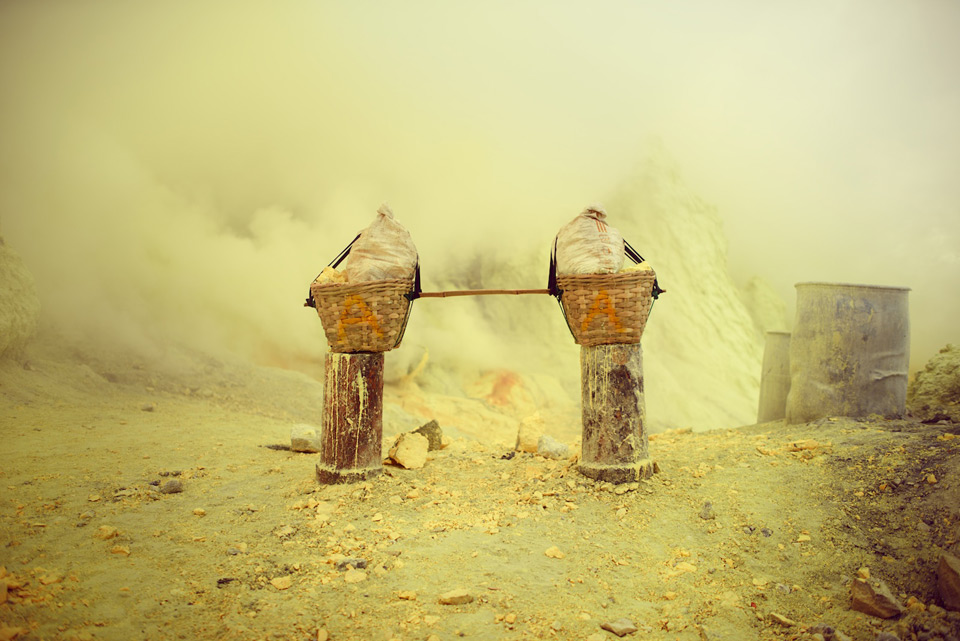 Old ceramic pipes are used to lift the heavy harvest. The baskets usually carry between 60-90kg of high-purity sulphur and are connected with a bamboo stick. 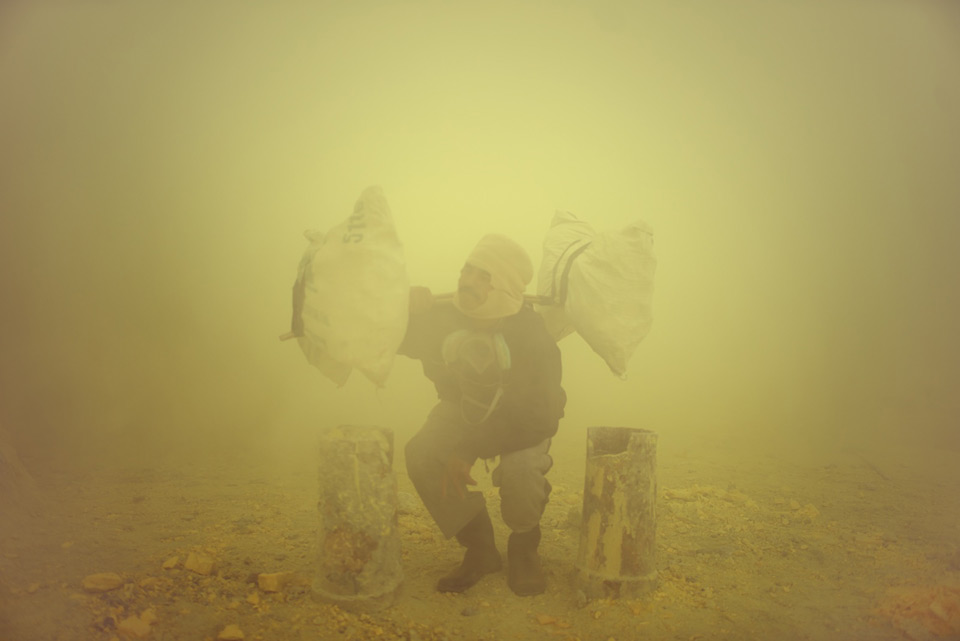 A miner lifts his bags full of sulphur on a bamboo stick. At times, the smoke forces miners to close their eyes even while carrying the heavy baskets. 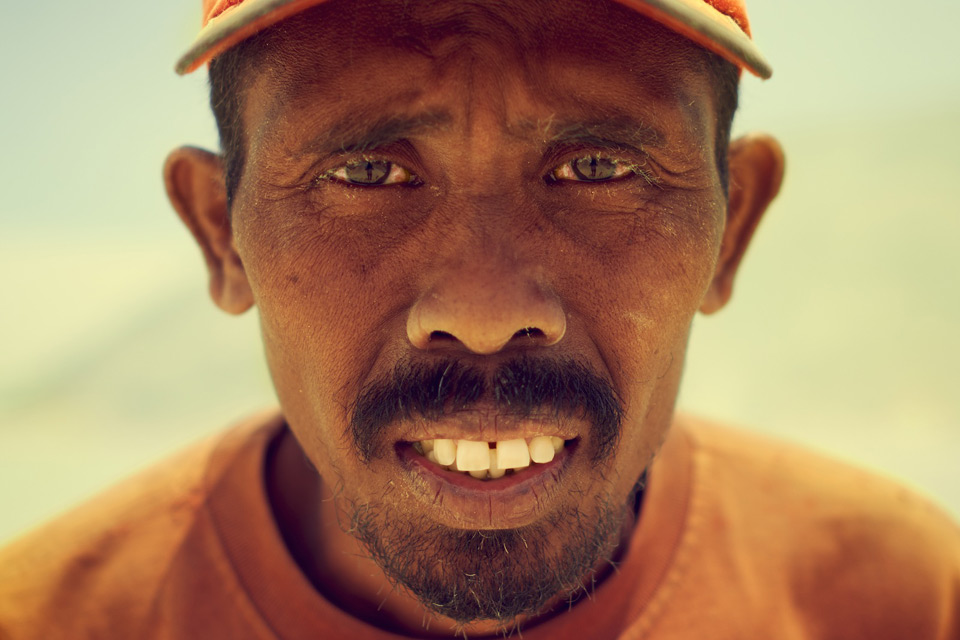 After just a few minutes in the mine, Suwono Licin (38) has yellow eyelashes and red eyes. Hydrogen sulphide and sulphur dioxide gases burn in the eyes and throat. The whole area is covered in sulphur dust. 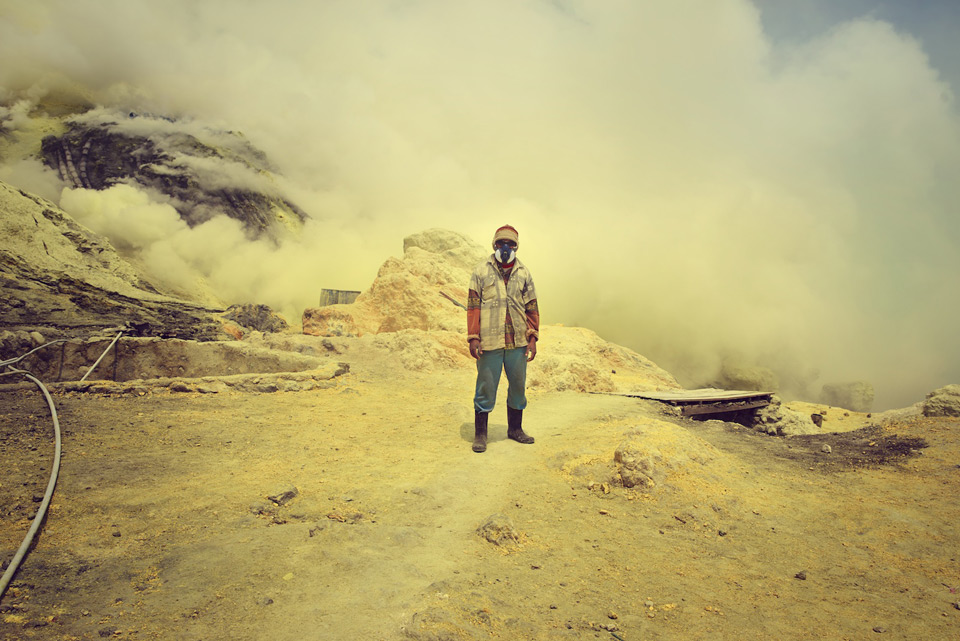 A worker in front of the main mining area. Sometimes the smoke also drifts over to this area, where they usually try to escape from the poisonous volcano gases. 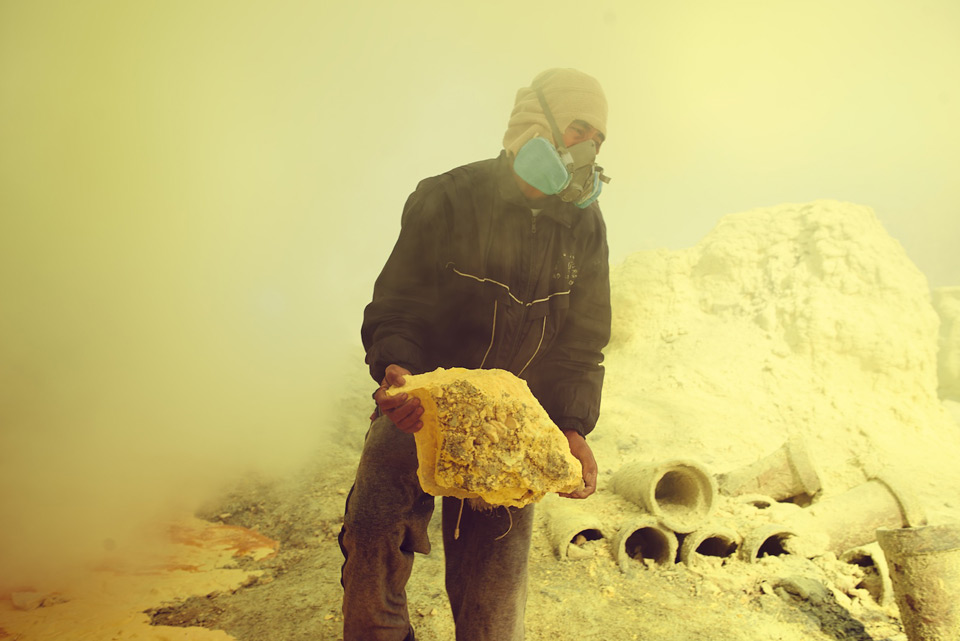 Even with gas masks it’s almost impossible to breath within the clouds of hydrogen sulphide and sulphur dioxide. The workers have to close their eyes while entering the clouds and can’t see clearly until they reappear with the heavy chunks of sulphur. 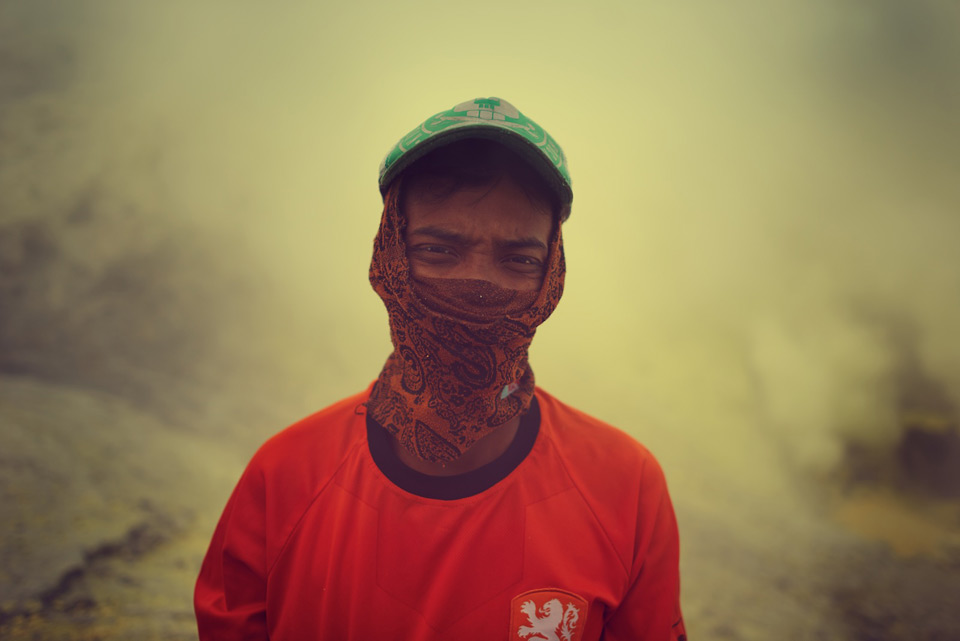 A cap replaces a helmet and a scarf a gas mask. Mislani Panggung Licin (28) started mining here a few months ago and is not well-equipped for this hostile environment. Many miners can’t afford protective clothing; others want to spend the money on other things first. 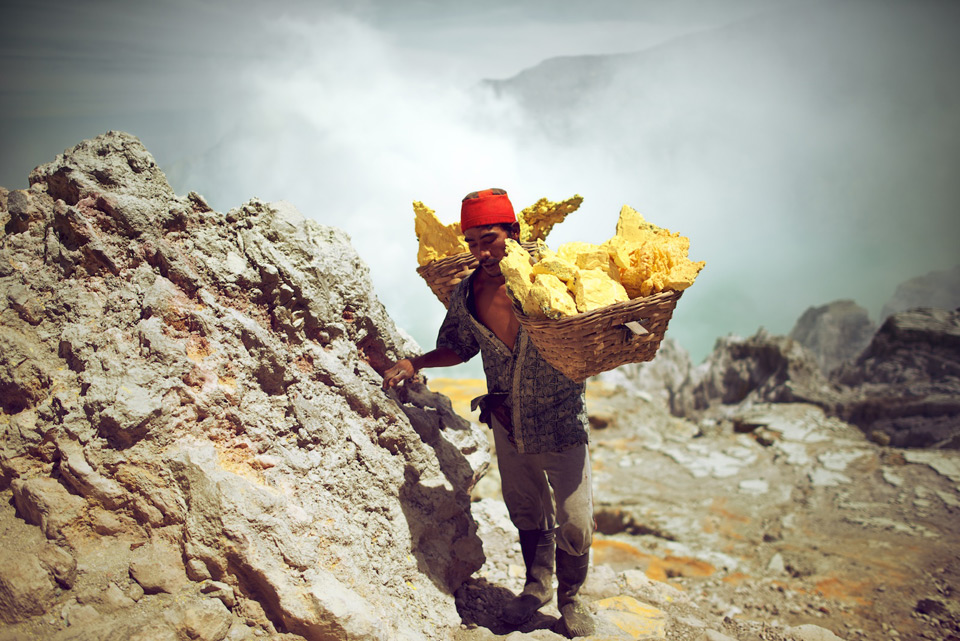 With full baskets, the miners walk up the steep crater walls very slowly and stop several times. In the background the wind keeps clouds covering the whole crater. 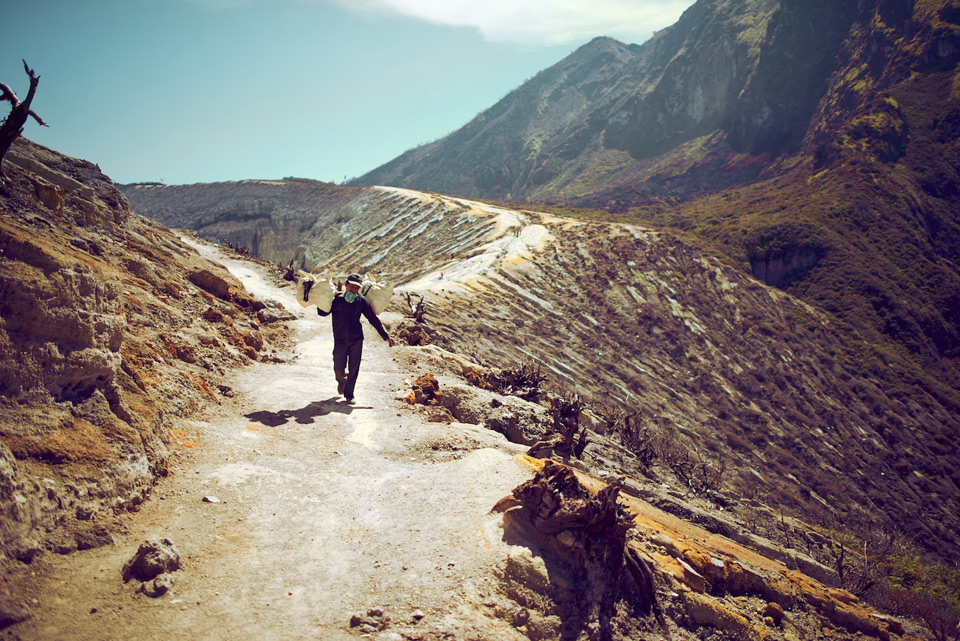 The rim of the volcano. From here on, the sulphur has to be carried for another 3.5 kilometers down a sometimes very slippery path to the collection point, where it can be exchanged for cash. 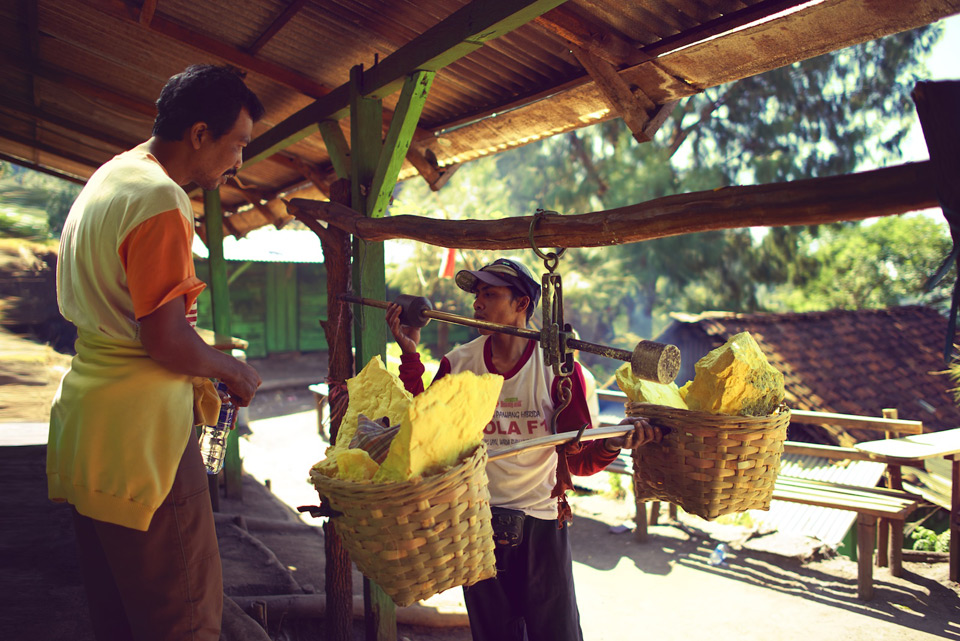 These packed bamboo baskets weigh 77 kilograms. Some miners are physically deformed by carrying up to 90kg on one shoulder. All of them have wounds on their shoulders. 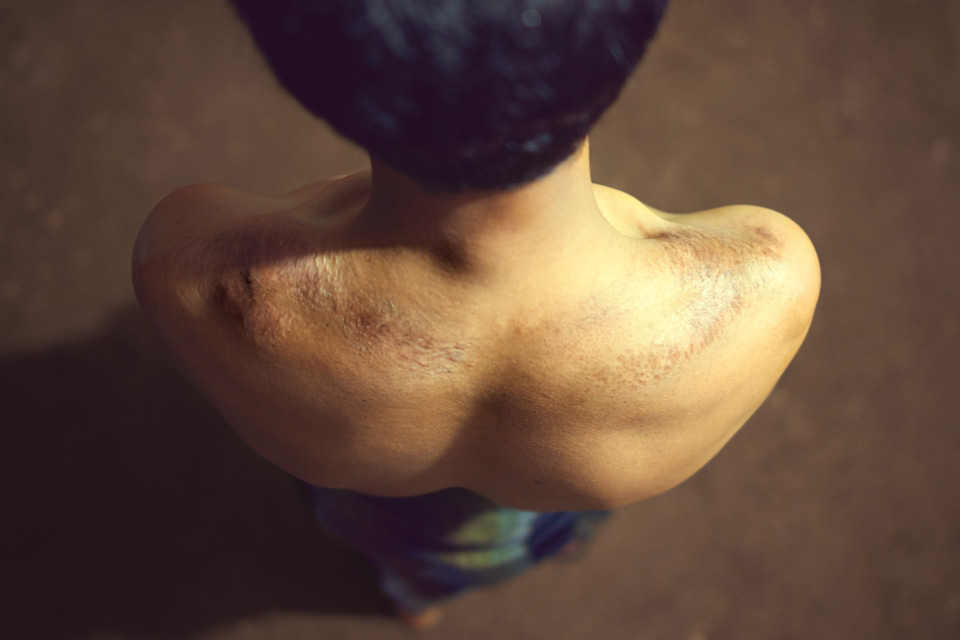 This man (Imam, 38) stopped mining 6 years ago, but you can still see the physical toll: shoulder injuries and deformed backs are quite common. Today Iman is working as a tour guide to Ijen. 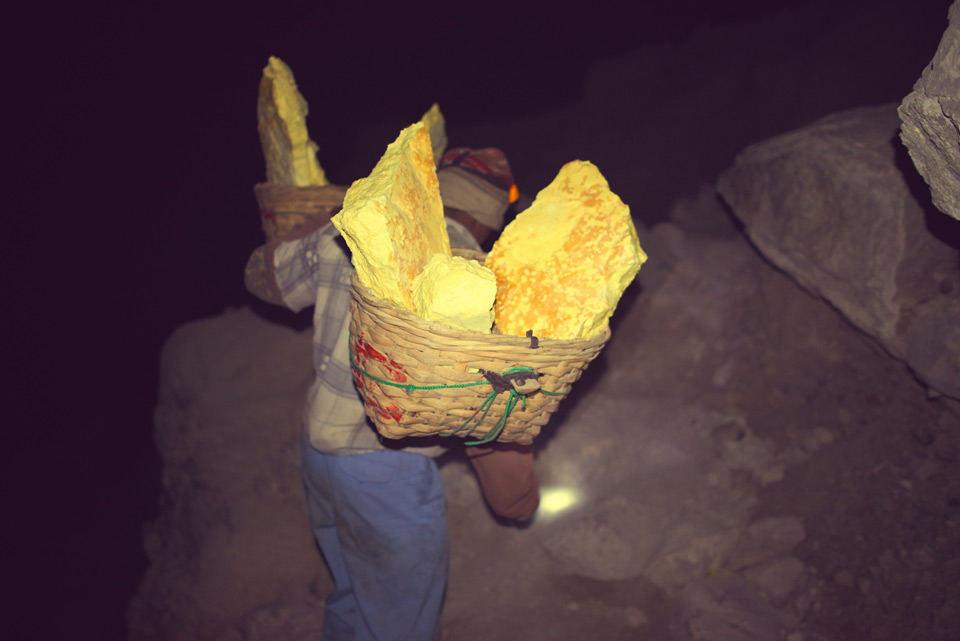 At 4:00 am: Some miners sleep nearby in simple housings, in order to fit in three trips a day. When it’s dark they use headlamps to light up their rocky path. 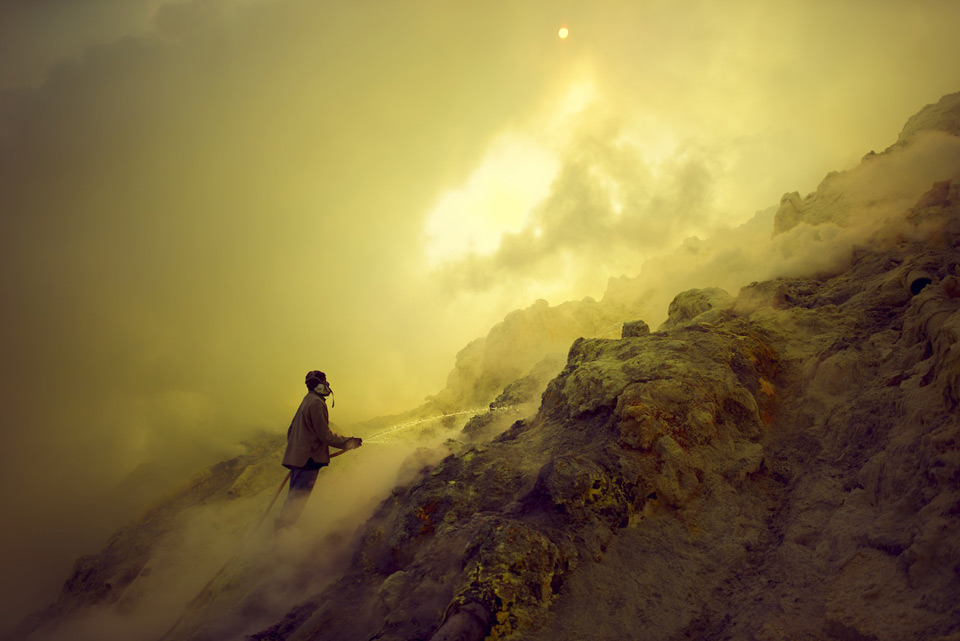 Sometimes, thanks to strong winds, the sunlight is just able to break through the heavy smoke. When this happens, the sun appears as a small glowing spot in the sky.

Kevin McElvaney is a self-described “guy with a camera” based in Hamburg, Germany. You can see more of his work at www.derkevin.com.