How can contemporary design adapt to the unique physical climatic conditions, tectonic traditions and rich local cultures of Canada’s Arctic? And how can the fragile threads of indigenous knowledge and tradition entwine with our collective modern lust for seductive new technologies, shiny objects and addictive processed foods without long-term damage to the fabric of a culture.

How can contemporary design adapt to the unique physical climatic conditions, tectonic traditions and rich local cultures of Canada’s Arctic? And how can the fragile threads of indigenous knowledge and tradition entwine with our collective modern lust for seductive new technologies, shiny objects and addictive processed foods without long-term damage to the fabric of a culture.

A Canadian design practice aptly named Lateral Office is proposing a number of revolutionary new modes of working in the North and establishing a number of innovative interpretations of what sustainable design means today.

One of Lateral Office’s recent projects, Arctic Adaptations, was chosen to represent Canada at the 2014 Venice Biennale in Architecture. Arctic Adaptations has already received plenty of well-deserved praise and is now being recognized at what is widely considered the most important event in the world for architecture. While I personally look forward to the annual Pritzker Prize in Architecture and the Aga Khan Foundation Awards, the Venice Biennale is no slouch. Sure, it’s a little glamorous, but that’s why this year’s grounded Canadian contribution is even more impressive.

This year’s Venice Biennale architecture curator is celebrity/architect Rem Koolhaas, who Vogue magazine once referred to as a “sad eyed visionary” in a glossy multi-page spread befitting Bono or Lady Gaga. Rem wants to emphasize the architecture and de-emphasize the architects this year, according to event press releases. It is from within this heightened aura of humility that the Arctic Adaptations exhibit at the Canadian pavilion, curated by Canada’s Lateral Office, appears with genuine sincerity. 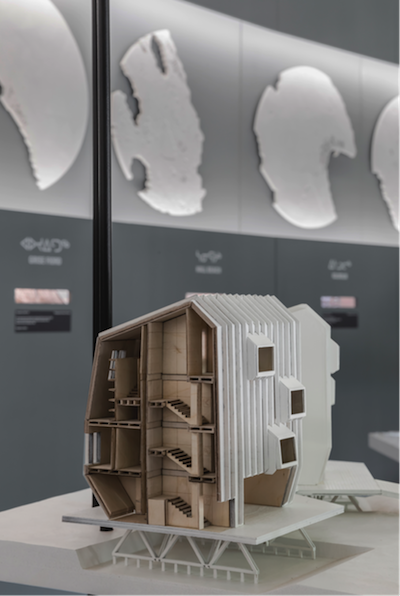 The exhibition includes soapstone carvings of Nunavut buildings, scale models of Nunavut’s communities, and numerous speculative architectural models and digital animations depicting the design of future homes and fantasies of institutional buildings supporting projected and much-needed programs in health, the arts, education and recreation for the North.

The Canadian Arctic Adaptations team was led by Lateral Office, a speculative design collaboration founded over a decade ago as an experimental design practice that has consistently focused on the role of architecture in the Arctic. Lateral Office’s work in the Canadian North stresses culturally responsive and sustainable design principles such as adaptability, multi-functionality and responsiveness to the region’s energy flows, geography, climate and cultures, in order to generate solutions and identify problems that design can tackle with elegance.

Lateral Office’s key practitioners are architecture professors Mason White (University of Toronto), Lola Sheppard (University of Waterloo) and Matthew Spremulli (Special Lecturer at both U of T and Waterloo). White and his team previously developed a number of research projects in Canada’s North that have included Ice Road Truck Stops and Health Hangars. Their projects all have a rooted concern in preserving existing contexts and evolved infrastructures. White and team have repositioned their design practice to listen, observe and respect the knowledge of those they are designing for to create a truly parallel practice rather than top-down practice, as White explained to me.

One such seemingly non-architectural problem that Lateral Office chose to address in a previous project is the problem of imported food in the Arctic. Traditional Arctic diets that had been based on hunting and fishing were shaped by complex physical and caloric needs and the natural cycles of animal migration, species breeding and responsible harvesting. The valuable rituals tied to hunting, eating and surviving have been largely replaced by imported convenience foods from the South. The results have been catastrophic on bodies, souls and minds – as well as so many cultural traditions integrated with food.

Lateral Office’s architectural solution for this non-architectural problem began with a very befitting lateral analysis of existing food storage and distribution patterns in order to identify what to nurture, what to help evolve and what to jettison. This very process rejects the standard phased design process that the architectural profession relies on as a rule (for billing purposes mainly). There is also an embedded acknowledgement of Indigenous knowledge systems and local infrastructures in this sociologically-informed first step – this is a holistic form of sustainable design.

Arctic Food Network demonstrates how contemporary design in the North can be successfully intertwined with identity, tradition and other forms of knowledge.

The resulting project, Arctic Food Network, proposes cabins for food preparation, food storage and lodging, and re-conceptualizes food distribution as a highly integrated social network – one that is based on interdependence, sharing resources and cooperation at the scale of the micro-community. Since roads and highways often do not even exist in the Arctic, the materials to build the cabins were designed for easy transport on sleds. Each site needs to be strategically placed near food sources and at intervals that can be traveled to and from by snowmobile, since existing snowmobile paths would be used in lieu of roads.

Arctic Food Network as a larger project addresses food security, ecological management, and proposes a safe navigation system for travelling across Baffin Island. Arctic Food Network is an important sustainable design project because it considers existing infrastructures first and foremost, and starts from an understanding of how the users perceive these infrastructures – both practical and cultural. The project demonstrates how contemporary design in the North can be successfully intertwined with identity, tradition and other forms of knowledge.

White and his team will continue to consult users by creating mock-up kits so that members of the community can practice assembling models of the cabins and provide user-based design feedback. Lateral Office is also developing similar prototypes elsewhere to test similar networks and are working with more Northern communities and stakeholders that include Nunavut’s Arctic College, several hunter and trapper associations, and Nunavut Tunngavik Inc. – an organization which ensures that promises made under the Nunavut Land Claims Agreement are carried out. Lateral Office also just became the inaugural recipients of the Arctic Inspiration Prize – a prize organized by ArcticNet, a network of scientists focused on the Canadian North.

According to Mason White, Lateral Office believes in a horizontal mode of thinking and working that does not categorize or hierarchize knowledge or even privilege information as “architectural,” as he explained to me. White also explained that sustained looking and listening without pre-determining a design action is how Lateral Office shapes their practice. Furthermore, in a place where traditional seal hunts are now aided by GPS and kills are recorded on iPhones, White pointed out that hybridity is already everywhere and the need to shape an emergent Arctic urbanism that is culturally relevant and does not wallow in the colonial nostalgia of the North is very strong. The thinking needed is indeed “lateral.”