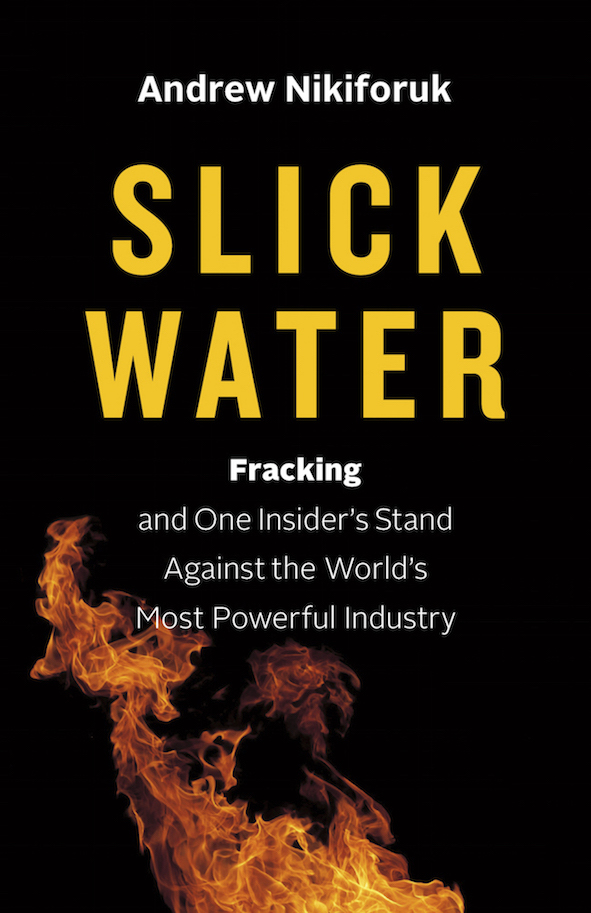 On a muggy Autumn night in Toronto last week, award-winning environmental writer (and long-time A/J columnist) Andrew Nikiforuk explained to two dozen people at the Gladstone Hotel the root of his interest in the underdog, the downtrodden and the dispossessed: “I come from a long line of peasants … with their feet on the ground.”

It makes sense. The Calgary-based author has long been at the forefront of writing about this country’s environmental calamities and those affected by them long before mainstream media coverage kicks its slow-moving gears into drive. He’s at it again in Slick Water: Fracking and One Insider’s Stand Against the World’s Most Powerful Industry in which he tackles the hydraulic fracturing industry in Canada, a country whose citizens, according to Nikiforuk, share “profoundly different” views on the controversial practice.

It’s a point Mark Mattson, the evening’s moderator and head of Lake Ontario Waterkeeper, made several times: our Toronto ballroom was only half full for the book launch, while similar events on Canada’s coasts — both east and west — would be standing room only. Mattson also predicted a much larger crowd would turnout in New York State or Pennsylvania where fracking is a grassroots, hot-button issue akin to wind turbines in this province. With 25,000 oil and gas wells already dug in Ontario, the province doesn’t seem to recognize that fracking is as big a reality for Canada’s most populous province as it is for Alberta — same technology, different scale.

Slick Water sees Nikiforuk turn his attention to the “enormously complicated” Jessica Ernst and her ongoing struggle against Encana, the Alberta government and the Energy Resources Conservation Board, an oil and gas industry “regulator.” Beginning in 2004, Ernst, a stubborn but “brilliant scientific researcher,” to Nikiforuk’s telling, began investigating oil company Encana’s fracking practices when she discovered methane in the drinking water of her rural community northeast of Calgary.

Rather than taking a payment from Encana and signing a document ensuring her silence on the matter as so many others have, Ernst fought on, racking up hundreds of thousands of dollars in legal fees. (Nikiforuk told the launch party, to much applause, that 15 percent of the proceeds from Slick Water will help Ernst pay her lawyers; though even if she’s successful, Ernst may still be in debt for taking on the energy sector.) Her case will be heard at the Supreme Court of Canada beginning in January 2016.

Ernst’s case highlights the “modern agenda for corporate fraud,” Nikiforuk told the crowd. This is what happens when the industry regulator is funded by industry, he said, and staffed by people once employed in the oil and gas sector and those looking to use a brief stint with the Energy Resources Conservation Board as a springboard to more lucrative work in the industry. It creates a regulatory framework without transparency. It’s the same pattern of denial, prove it, silence and blame employed by the Catholic Church in covering up sexual abuse allegations made against high-ranking members of the clergy, Nikiforuk said. It’s an allegory he returned to repeatedly to explain how people ignore situations known to be troubling until the weight of evidence forces society to acknowledge the danger in its midst.

Slick Water is Nikiforuk sticking to what he does best — rousing us rabble to care about groundwater contamination and corporate fraud. Pipelines may get all the attention in Central Canada, but we can’t be blind to the plethora of other environmental evils ravaging the country. The book that began as a story about groundwater contamination quickly became a story about fracking technology: but even this soon evolved into a story of how corporate fraud and government acquiescence are threatening public health and safety. There are 4.3 million oil and gas wells in North America, 500,000 in Western Canada alone, and almost all of them leak methane into water or the atmosphere. Canada has been home to some of the largest fracking-related earthquakes in Earth’s history, Nikiforuk said. The 12 year trial of Jessica Ernst to confront the companies and government agencies who looked away while her water was poisoned warns that hydraulic fracturing and its associate dangers are no uniquely American phenomenon. Once again, Nikiforuk is right to wake us from our slumber.