A\J is partnering with the Otesha Project to cover two of their 2013 tours: Nation to Nation and Pedal to Plate. This post is from Nation to Nation tour member Arestia Dehmassi – watch the video above for an overview of the tour. Check out A\J’s photo essay from the Pedal to Plate tour and watch for video coming soon.

A\J is partnering with the Otesha Project to cover two of their 2013 tours: Nation to Nation and Pedal to Plate. This post is from Nation to Nation tour member Arestia Dehmassi – watch the video above for an overview of the tour. Check out A\J’s photo essay from the Pedal to Plate tour and watch for video coming soon.

As we ride along the St. Lawrence River, a guiding force of nature that flows beside us, it is a reminder of what we are all doing here; our inherent rights and responsibilities as human beings. It comes up a lot, especially from elders – that there is knowledge we are to gain and responsibilities that go with that. Every single member of this weird and wonderful bicycling team, representing the four directions of the world, recognizes our responsibility to the Creator, mother earth, and to one another. 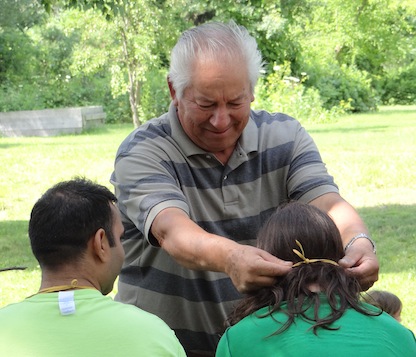 It’s amazing how, at every stop along the way, whenever we mingled and made new friends in all sorts of communities, folks are always surprised by how close we all are when they learn we met just a few days ago. I’ve been told a few times how beautiful it is to see a group of diverse young adults be so close. There is no shortage of love and hugs here.

The prophecy of the Seventh Fire comes up often as we ride along our path. The prophecy says, in part, that all four colours of humanity will come together in respect, completing the full cycle. The fear of strangers, our own neighbours, has set us back, but it is never too late to turn around. Now is the time.

We have a long way to go but I know that we are all on a good path based on the gifts we have tucked away in our medicine pouches. I said it the first day we met – I believe we are all superheroes. As the tour slowly wheels towards its end, I now know for sure that we are all superheroes, not just those on tour, but everyone who is inspired to ride and learn. This is just the beginning of beautiful friendships and sacred relationships and a journey we are all on together. 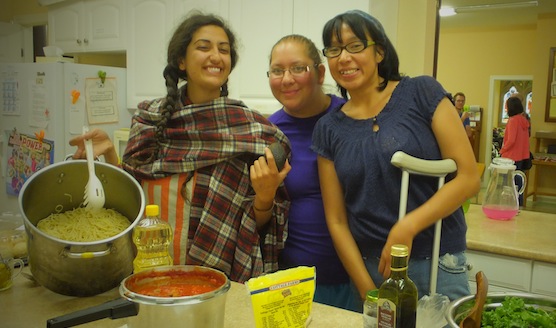 The 2013 Nation to Nation Tour is a pilot project launched by KAIROS and The Otesha Project, in collaboration with the Mohawk community of Akwesasne, aimed at enabling tour members to learn about our responsibilities to each other and to the earth, and to gather the courage and skills to live them out. From July 27 to August 14, a passionate group of intercultural youth volunteers rode their bikes 300km along the St. Lawrence River from Akwesasne to Tyendinaga in order to learn from the communities they visit and from each other. Along the way, they facilitated a theatre-based workshop to raise awareness of the nation-to-nation relationship between Indigenous and non-Indigenous peoples in Canada. You can read more blog posts from tour members on the N2N Tour Blog.

The Otesha Project is a national youth-led charitable organization that uses experiential learning, theatre and bicycle tours to engage and empower Canadians of all ages to take action for a more equitable and sustainable world.