A few weeks ago, I was invited to participate in the unveiling of Michael Stadtländer’s Camp Home project. The internationally renowned chef has hand-crafted an elaborate celebration of his 20 years at Eigensinn Farm with what can only be described as an out-of-this-world experience.

A few weeks ago, I was invited to participate in the unveiling of Michael Stadtländer’s Camp Home project. The internationally renowned chef has hand-crafted an elaborate celebration of his 20 years at Eigensinn Farm with what can only be described as an out-of-this-world experience.

The only hints of the event on his 40-hectare farm in Singhampton, Ontario, were the mostly cryptic signs along a tree-path, such as “Dream,” “GMO” and finally “Turn left,” hanging from some branches. Turning left brought me to a hill overlooking the camp, where Stadtländer and his seven apprentices had transformed his property with talking sculptures, painted shelters and a planted field of sunflowers. 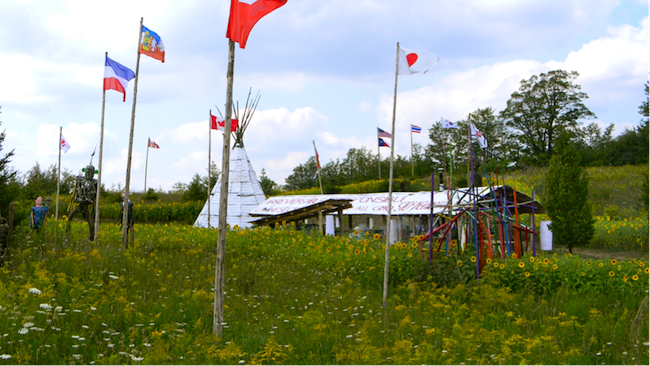 The chef himself greeted his guests, offering oysters, wine and a detailed backstory of the Camp Home project. When Stadtländer first immigrated to Canada in his early 20s, he was intrigued by the idea of summer camp for kids. Eventually he wanted to create a camp for adults that communicated important messages about the state of our food systems. Each detail of Camp Home is laced with Stadtländer’s idiosyncrasies in the form of installations ranging from sculptural, talking statues to a gazebo and cooking area designed like a medieval castle. For example, pressing a button on one of the three sculptures produces a recording of Stadtländer and his apprentices discussing the history of genetically modified organisms, the importance of using social media for environmental awareness, and how organic farms can be used to protect bees and aphids. 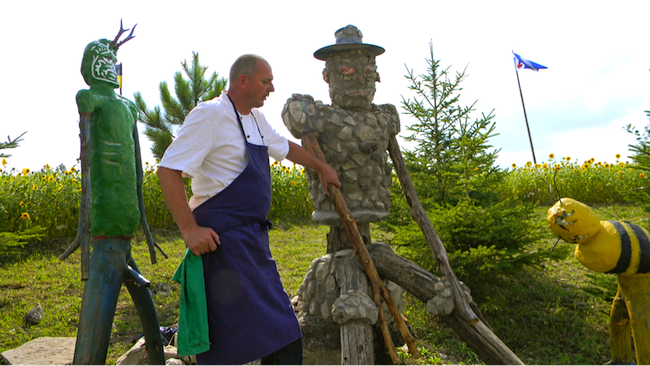 Another important piece of Camp Home is a teepee filled with photographs from Stadtländer’s past two decades on Eigensinn farm. The pictures feature exciting dinner guests such as Sarah Polley and David Suzuki, his wife and son, and meaningful images and moments from his experiences as a chef. Surrounding the teepee were flags from places around the world that lead him to Eigensinn – a German flag for where he grew up; a Swiss flag for Jamie Kennedy, who introduced him to Canada; and one for each country where he worked as an apprentice. 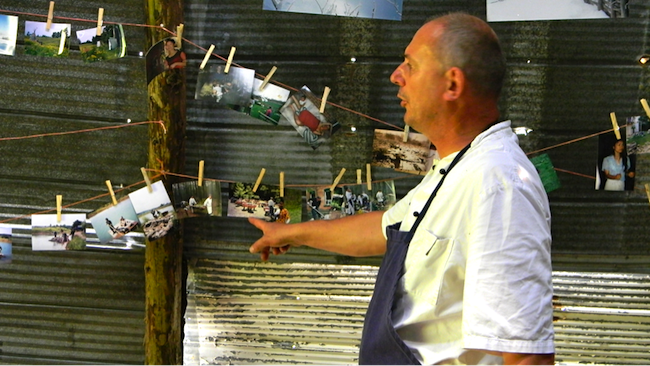 We were lead from the teepee to an outdoor dinner table, where we were lucky enough to be joined by the chef himself for a meal. As dishes began to appear in front of us, Stadtländer carefully explained its personal or cultural significance. Always an artist, the presentation of each dish Stadtländer created was as important as the food that composed it.

It was an overwhelming task to choose my favourite dishes, but a few that stood out. The first course of wild, local mushroom ravioli was served on driftwood that Stadtländer had collected from the BC coast when he first arrived in Canada. 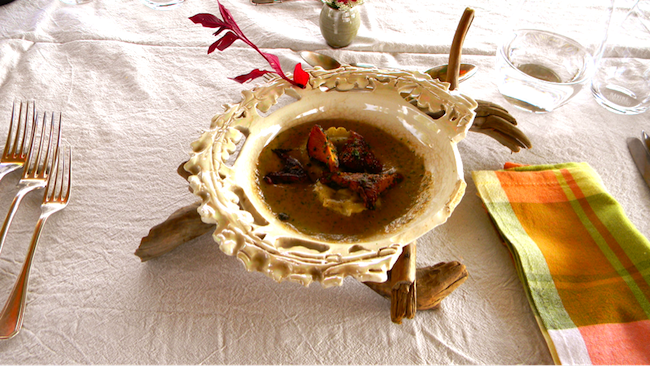 A close friend of Stadtländer’s made the presentation dishes, and their blemishes and chips revealed their many years of international travel and use by dining guests. Stadtländer later showed us where he picked the mushrooms in the forest behind his property, as well as how he carefully prepares the ravioli from scratch.

Perhaps the most stunning presentation of the 10-course dinner was the wild berry sorbet. Both the wildberries and the wood used to present the dish were, of course, picked from Eigensinn Farm, and they were beautifully served on a globe of ice. 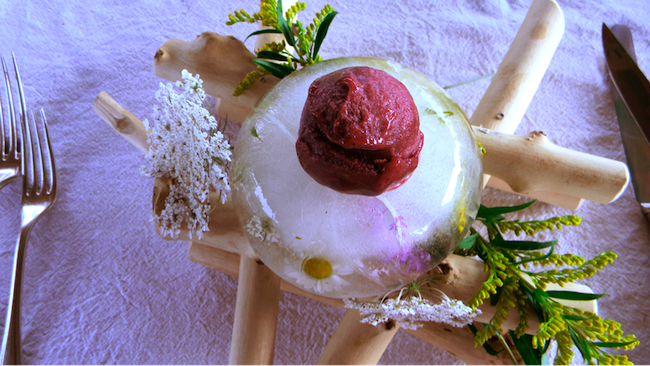 One of the most delicious dessert courses (there were four!) served was dubbed the Napoleon – a hazelnut and blueberry creation served on china from the Napoleonic era.

“I wash these dishes myself,” explained Stadtländer. “No apprentice is allowed to touch these, they are special.” 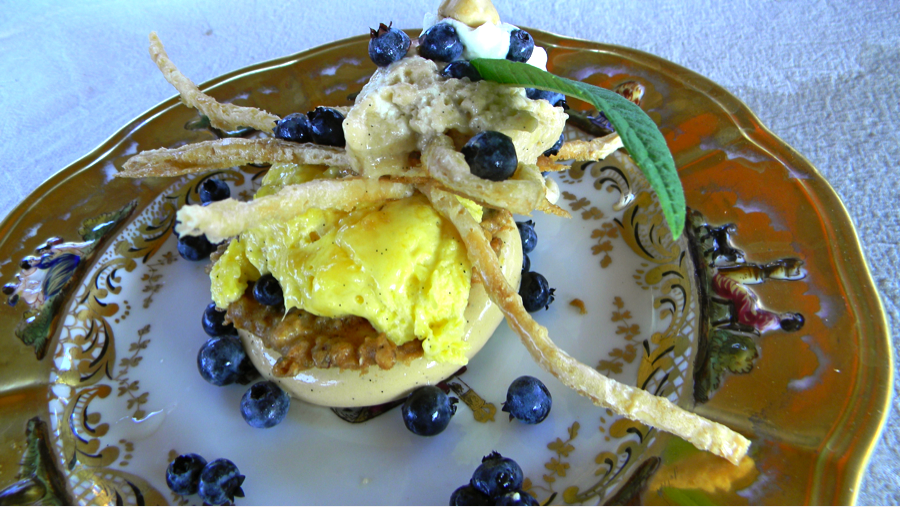 Throughout the meal, Stadtländer regaled us with stories of how the farm has changed under his care and what his vision is for the next twenty years. His ambitious plans include wanting to produce a movie called The Chef’s Dream, in which a young genetics engineer falls in love with an organic gardener.

As intended, I left Eigensinn Farm feeling the delight of a child after her first day of summer camp. The Camp Home project provides a holistic experience of exquisite, organic food, probing social critique and playful artwork. It also offers wonderful insights into how food, art and social awareness are connected for Stadtländer. 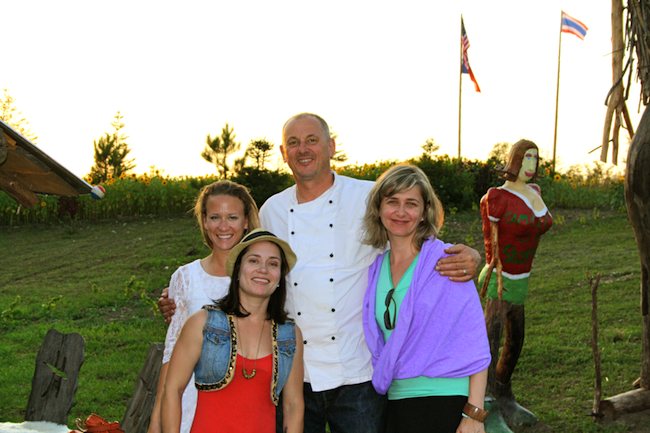 Jessica is A\J's Advertising and Outreach Liaison, and a recent graduate from the University of Waterloo with an English major and French minor. She's also a fitness instructor, marathon runner and volunteer with Greening Sacred Spaces.