Think Global is a new blog series from Canada Conserves’ Chris Winter. During a year-long trip around the world, Chris will be sharing examples of how other countries are dealing with climate change, resource scarcity and economic turmoil, showcasing the role of culture in our ability to tackle big environmental issues and teasing out ideas and approaches that we can apply at home.

Think Global is a new blog series from Canada Conserves’ Chris Winter. During a year-long trip around the world, Chris will be sharing examples of how other countries are dealing with climate change, resource scarcity and economic turmoil, showcasing the role of culture in our ability to tackle big environmental issues and teasing out ideas and approaches that we can apply at home.

After a week in Paris, it was our son, Aran, who figured out the difference between Parisians and Torontonians. “In Paris,” he observed, “the drivers are polite and the pedestrians are pushy.” France is the first stop on our family’s year-long world tour and already there are lessons to be learned.

In Paris the drivers are polite and the pedestrians are pushy.

Getting around in Paris is actually the reverse of Toronto. The drivers make room for everyone, including bikes and pedestrians. Rarely do people honk, and even then politely even though the city is a maze of narrow streets and bustling boulevards. The traffic ballet at the Arc de Triomphe circle, where incoming rather than outgoing vehicles have the right of way, is amazing. Somehow it works, because everyone knows the system.

The pedestrians of Paris are a different matter. Sidewalks are freeways, meant for walking. If you want to stop, you need to pull over or risk being run over by a Parisian who will give you a “pffft” of contempt. Streetside cafés press patrons against pedestrians, but the narrow strip of pavement is meant for walking.

Like anywhere else you have to know the unwritten, as well as the written, rules of the road. It’s the culture of getting around; something Europe has in spades and we Canadians seem to lack.

Torontonians dream about being world class. We’d love to be like London or Paris, with a twisting network of subterranean pipes whisking us from any point of the city to another; or like Stockholm, where bikes are welcome and room is made available. While there are many things to learn and copy from the French and European approach, “subways, subways, subways” is not one of them. 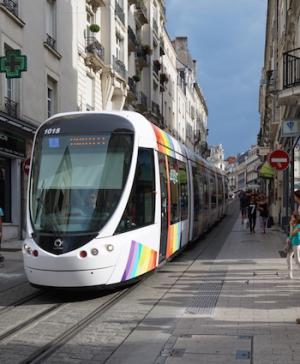 The LRT in Angers.

But that doesn’t mean we can’t take action. France is full of examples of municipalities that have built new transit lines. Angers (population 148,000) has a new streetcar line running through the city, inaugurated in 2011. Toulouse (population 500,000) has new driverless subway and LRT lines that were built in the last decade. Toulouse also has mini-buses plying the tight pedestrian-filled downtown streets. The French work with what they have, and make it better. While some forward progress is being made in Toronto, we still seem to be mired in debate around which plan should be followed and what the actual timeframe should be.

Cycling provides even better examples of the French commitment to act. Less than ten years ago, Paris decided to become a bike-friendly city. By 2010, it had over 440 km of cycle paths, with plans to increase to 700 km by 2014. Toronto has over 550 km, which sounds comparable until we remember the difference in size of the two regions. Toronto’s bike lanes are a patchwork that end at the most inconvenient if not dangerous points; Paris has integrated bike safety onto every street and intersection. 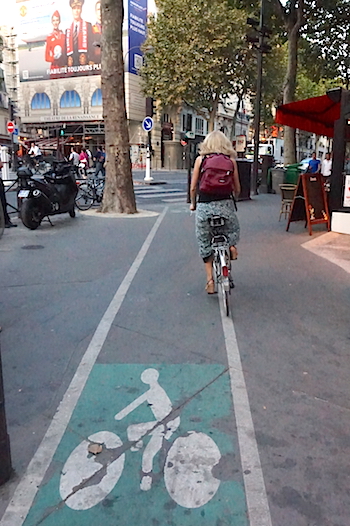 What we saw in Paris was an amazing network of bike routes, including separated lanes, bus and bike lanes, contraflow streets and even bike lanes on sidewalks. Velib’ bikes abound, part of the 20,000 bikes and 1,800 stations across the city. Cyclists were well behaved, alert and moving seamlessly between cars and pedestrians. Parisian cyclists told us they need to be ever vigilant on the streets, but they acknowledge that cycling in the city has evolved rapidly over the last ten years.

The difference is cultural. From the moment Paris decided to become bike-friendly, the government and people both made space for bikes in their already crowded streets. It’s not just Paris. In Toulouse, we saw contraflow bike lanes on streets one half the width of those in Toronto’s residential areas.

The lessons for us back home are clear. First, we need to decide what type of city we want to be: car-dependent, or multi-modal? The answer is already pretty clear: we love our vibrant neighbourhood villages, and we want easy and affordable transit into the city core and between communities.

The second lesson is to act: to empower our governments and planners to enact change. The answer lies not in political platforms, but in the capacity to make things happen. Our institutional gridlock rivals anything we can find on the road, and that too is part of our evolving culture of caution.

We have been pressed into being angry by opportunistic political forces, and we are mired in rules, consultations and layers of bureaucracy.

Canada, and Toronto in particular, is a cultural mash-up. We embrace immigrants and the mix of cultures they bring. We are renowned as being an open and friendly country. We are also a young culture, vulnerable to outside influences. We have been pressed into being angry by opportunistic political forces, and we are mired in rules, consultations and layers of bureaucracy. Our national image is being redefined.

European culture is centuries old and forms the core of how governments and society respond to emerging challenges. By contrast, in Canada, how we respond to these challenges will mold our culture for generations to come. We need an army of planners and paint cans to transform our streets in a way that says “This is Canada, all are welcome here.” We need a common sense, no nonsense approach to transit that integrates the best of European and other ideas into our own communities, towns and cities.

It comes down to this: safe cycling and public transit are important investments in our communities, our environment and our economy. They need to become part of our culture. 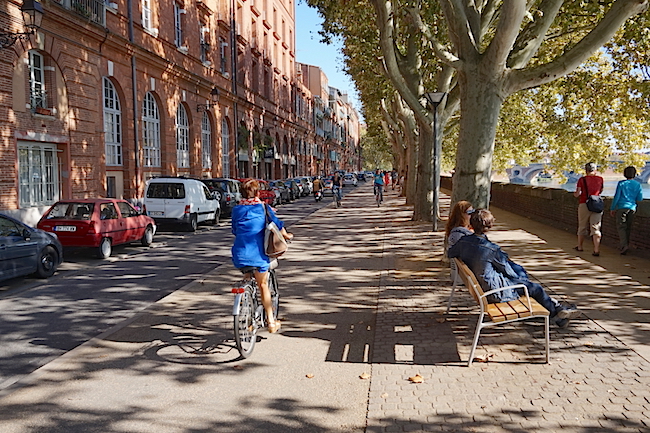 The former executive director of the Conservation Council of Ontario, Chris has started a new initiative to help Canada transition to a sustainable future by “living better with less,” Canada Conserves. After 30 years in the environmental movement, Chris Winter is on a well-deserved round-the-world sabbatical with his family. Along the way, Chris will be sharing examples of how other countries are dealing with climate change, resource scarcity and economic turmoil. Follow him on Twitter or Facebook. You can also follow the family’s Hello Cool World tour blog.