The past decade has taught environmentalists a hard truth about voting patterns, one that many have been trying valiantly to change: the environment takes a backseat when issues surrounding jobs and the economy are front and centre.

Just ask Green Party leader Mike Schreiner. “The year 2007 was a great electoral climate,” he told me in a June 2012 interview on how his party’s electoral fortunes would play out in the next election, now about to happen on June 12.

The past decade has taught environmentalists a hard truth about voting patterns, one that many have been trying valiantly to change: the environment takes a backseat when issues surrounding jobs and the economy are front and centre.

Just ask Green Party leader Mike Schreiner. “The year 2007 was a great electoral climate,” he told me in a June 2012 interview on how his party’s electoral fortunes would play out in the next election, now about to happen on June 12.

“Al Gore just won the Nobel Prize, the issue of climate change and the environment for the first time ever was at the top of public opinion polls — even ahead of healthcare,” he said. “People felt secure that they could support the Green Party and we almost broke through and won a few ridings. We came extremely close.”

But Schreiner’s party lacked the organizational capacity and the money to truly capitalize on the shifting tide, though he was optimistic the time would come again.

The 8.02 per cent of the vote the Greens received under then-leader Frank de Jong in 2007 would not be repeated next time. The massive economic downturn in 2008-09 and slow recovery that followed meant jobs and jobs alone dominated the 2011 campaign, reducing the greens to just 2.94 per cent of the vote in the first election with Schreiner at the helm.

Unfortunately, green issues, if they’ve been making a comeback at all, have never fully rebounded in the public consciousness. And in the lead up to Thursday’s provincial election, with jobs and jobs alone again the deciding factor, environmental issues have been all but forgotten.

But politicians ignore the ways in which environmental well-being underpins everything from job growth to healthcare at their peril, according to the Green Prosperity Coalition, an alliance of concerned green groups.

No party has managed to wrap their heads around the fact that a healthy environment makes for healthier people, lower healthcare costs and increased productivity.

“There are big issues at play in this election — from the alarming decline in pollinators to the uncoordinated rush to develop numerous mines and other resource projects in one of our last great wilderness areas,” said Tim Gray of Environmental Defence in a written statement.

His organization, along with the David Suzuki Foundation, the Canadian Environmental Law Association, the Pembina Institute and many others are lamenting the fact that no party has managed to wrap their heads around the fact that a healthy environment makes for healthier people, lower healthcare costs and increased productivity.

“We need a clear plan to build a healthy and prosperous province and a strong green economy,” added Anna Baggio from CPAWS Wildlands League. “That’s the challenge of our time and we want to give voters the information they need to understand where the parties stand on that question.”

To that end, the 20 environmental groups compiled 19 questions on various environmental topics. They sent questionnaires to each of the four main parties and combed through platforms for supplementary details all to answer a single question: Which political party is proposing to do the most for the environment?

On issues from transit funding and nuclear power to protecting endangered species, developing a carbon pricing system, orchestrating a regional environmental assessment of the Ring of Fire and containing urban sprawl, results proved what many could have predicted at the outset. 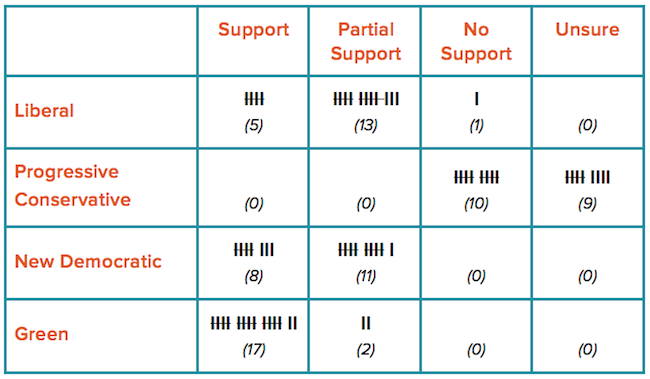 Get a question-by-question breakdown at GreenProsperity.ca

The Liberals do best on reintroducing key pieces of environmental legislation that died on the order paper while the New Democrats do best on curbing urban sprawl. The Greens score well on almost everything, but achieve only partial success on using development charges to pay for transit and shutting down the Pickering Nuclear Generating Station by 2015. The Tories, with not a single ‘Yes’ or even partial score to their name, fare badly across the board on the environment.

The previous legislative session wasn’t much kinder to the environment. While the Liberals introduced many interesting environmental bills — reducing coal burning, improving waste diversion, protecting the Great Lakes, etc. — none of them came close to becoming law. And the government put nothing substantial on the environment in their May 1 budget which became their de facto campaign platform.

In an effort to shore up their traditional supporters, the NDP included a handful of green goodies in their platform, including money to conduct environmental assessments of pipelines like Line 9 and Energy East which flow through Ontario and create cycling networks between cities. But even these issues have been lost in the larger campaign rhetoric and focus on employment.

The Green Prosperity coalition isn’t the only one lamenting the lack of awareness on environmental concerns. York University professor Mark Winfield, in a widely read op-ed in the Toronto Star and Hamilton Spectator that ran earlier this month, called this the “not-so-green” election.

“Economic transitions, the impacts of climate change, and shifting demographics present enormous environmental, economic and social challenges for Ontario in the coming years. So far, none of the major parties have offered a compelling vision of how they will meet these challenges.”

But it’s not all doom and gloom. On Tuesday, TD Bank chief economist Craig Alexander issued a report praising the economic value of Toronto’s extensive tree canopy. He claimed it provides over $7 billion in value to private companies and homeowners in everything from absorbing pollution and cooling homes to soaking up excess rain water to cut back on flood risks.

He estimated each tree in Toronto alone is worth $700, providing a $3.20 return for every dollar spent on planting and maintaining 70 million trees in the city. “It’s money well spent,” Alexander said. “I think people value trees, but they probably don’t go around thinking about them. They take them for granted.”

We are quickly learning that we can’t take the environment for granted anymore. With just two days to go before voters hit the polls, the 2014 campaign will be another wasted opportunity to address pressing environmental concerns unless you use what time there is left to tell candidates what green issues matter to you and why they should matter to everyone.