We don’t often compare a city with a beehive. According to Marilyn Hamilton, however, perhaps we should. In her book Integral City, Hamilton presents a radical new framework that can be used to design and regenerate the spaces in which we live. Her approach involves a view of city planning from 10,000 feet, and at that height, it is interesting. Unfortunately it stays up there, drifting in clouds heavy with words.

We don’t often compare a city with a beehive. According to Marilyn Hamilton, however, perhaps we should. In her book Integral City, Hamilton presents a radical new framework that can be used to design and regenerate the spaces in which we live. Her approach involves a view of city planning from 10,000 feet, and at that height, it is interesting. Unfortunately it stays up there, drifting in clouds heavy with words.

Hamilton, a champion of the human ecology of cities, frames her discussion around the essential roles that families, communities and cultural systems play in generating the conditions for a city to thrive. She also raises the fascinating possibility that the quality of life in a community goes through natural cycles, which we might be able to anticipate and influence if we understand them better.

The book uses the example of a bee colony to explain the idea of the city as a complex adaptive system. The “co-intelligence” of the hive sustains the colony, while also adding value to the fields and orchards through pollination. Although it is interesting, the beehive-city analogy wears thin with repetition and becomes tiresome over the course of the book.

Hamilton often references the works of such luminaries as Jane Jacobs, Bill McDonough (Cradle to Cradle), and Christopher Alexander (A Pattern Language). Sadly, much of her book lacks the poetic insight that Hamilton so admires in Jacobs and Alexander.

In her concluding chapter, Hamilton speculates that we have the technology and the resources to colonize outer space. I’m as much of a Trekkie as any boomer, but I think the world has grown out of this adolescent sci-fi dream. What we need now is to concentrate all our collective efforts on the task of inhabiting our finite, long-suffering planet in a lighter and much more humble way. Hamilton’s fantasy of bold space pioneers is a sorry end to a promising book, and a turn of mind that I suspect the bees will appreciate least of all. 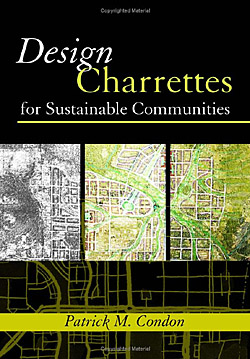 Design Charrettes for Sustainable Communities is a welcome antidote. The idea that the inhabitants of a place should be consulted in matters of design, and that they could be co-creators of a sustainable city, is the premise of both titles. Fortunately, Condon’s book is both philosophical and practical, styled in the form of a self-help volume for citizens as well as planners, architects and engineers. It starts from the assumption that the desire for sustainable design expressed in Integral City is shared by many of us who are engaged in city politics, planning and economic development. Having agreed on the problem of the “dis-integration of cities,” we can get on with the task at hand – the messy business and politics of working together.

A design charrette, explains Condon, is “a time-limited, multiparty design event organized to generate a collaboratively produced plan for a sustainable community.” They can be of two kinds: visioning charrettes and implementation charrettes. The outcomes of both must always include compelling drawings that articulate the consensus reached by the team in a graphic form.

The book is deeply informed by the voice of experience. With his “Nine Rules for a Good Charrette,” Condon achieves the difficult goal of laying out the complexity of the process in “how-to” detail, while also giving the reader the sense that it is doable and worthwhile. The rules are: design with everyone; start with a blank sheet; build from the policy base; provide just enough information; talk, doodle, draw; charrettes are jazz, not classical; lead without leading; move in, move out, move across; and the drawing is the contract.

Condon demystifies a problem that has frustrated designers over the years – the seemingly impenetrable web of regulations intended to protect public health and safety, which make innovation difficult. One solution is a properly choreographed implementation charrette that gives elected officials legitimate grounds, sanctioned by a process involving all key players, to act as agents of real change. The word “choreograph,” which evokes images of dance, is apt.

This review was originally published in Books from the Deep Green, Issue 35.3. Subscribe now to get more book reviews in your mailbox!

Producer/writer Chris Lowry works for a convivial post-carbon future. He can be found at ecotone.ca.