Here’s a fact I had never considered: the word “rival” comes from the Latin word rivalis, meaning “those who draw water from the same source.” Rivalry is closely related to the availability of shared resources, and tensions are easily triggered when food and water are at stake.

Here’s a fact I had never considered: the word “rival” comes from the Latin word rivalis, meaning “those who draw water from the same source.” Rivalry is closely related to the availability of shared resources, and tensions are easily triggered when food and water are at stake.

Now, let’s take this to the extreme: climate change projections suggest that the flow of  many of the world’s major rivers will be seriouslyreduced as glaciers retreat. The scale of potential conflict is staggering. The Himalayan watershed alone, which includes the Ganges, Indus, Yangtze and Mekong Rivers, supplies water to almost half the people on this planet, including nuclear powers China, India and Pakistan.

But this is about more than rivers. Two new books on the issue, Climate Wars and Global Warring, introduce a bevy of reasons for concern: natural disasters, disappearing low-lying island states, shifting coasts and access to oceanic exploitation zones, the melting Northwest Passage, desertification and altered patterns of food production. Each has the potential to redefine how we interpret and conceptualize international law, how we interact diplomatically with other nations, and how and why we engage militarily.

Cleo Paskal, a fellow at Chatham House who boasts journalistic stints at The Economist and the Chicago Tribune, seeks to “introduce and legitimize the idea that environmental change is about to have enormous, and specific, geopolitical consequences.” In Global Warring, she surveys the most visible and relevant climate change patterns, all of which have already begun and show no sign of immediate reversal, and considers their effect on current and future trends in global power dynamics. 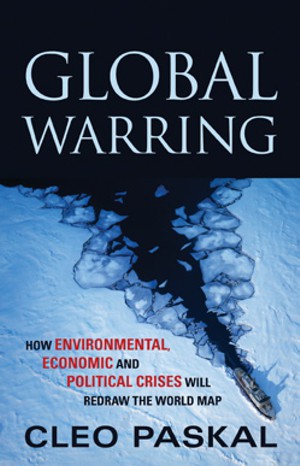 The book focuses on questions regarding international law and the strategic manoeuvring of large and small states to position themselves for the future. What happens if low-lying Pacific island nations see their homelands overtaken by rising sea levels? Paskal analyzes how these states are aligning themselves with Pacific powers, and delves into a series of related questions and issues. What legal precedents will result from the disappearance of island states? What legal status will be bestowed upon the refugees? Will they maintain their exploitation rights for fishing and offshore drilling in the event of deportation?

These issues are certainly engaging. But having set an ambitious and broad purpose, Global Warring fails to provide a clear enough hypothesis and argument for the reader to follow. And Paskal places too much emphasis on the science of climate change, at the expense of her explorations of its geopolitical implications.

In Climate Wars, Gwynne Dyer, who has served with the Canadian, American and British navies and holds a PhD in War Studies from the University of London, compares the possible impacts of best- and worst-case climate change scenarios. The book offers a compelling analysis of the dynamics between great powers, and delves deeply into the role of rogue states, migration (and the fencing-out of migrants), as well as the prospects for geo-engineering.

Unlike Paskal, Dyer does not spend any time arguing that climate change is happening – he considers it old news. This allows him to get more quickly to the point. Dyer draws on various experts to sketch out futureclimate scenarios along with their corresponding geopolitical outcomes. Turning from milder scenarios where collaboration leads to semi-effective adaptation and mitigation, the reader is plunged into post-apocalyptic Pakistan and India, days after an all-out nuclear confrontation over access to diminishing water supplies.

However, since it attempts to forecast alternative futures, the book often rests heavily on the opinions of interviewed experts, for lack of available hard data. While this is legitimate given the purpose of the book (How could you find data from 2019?), the long quotes often break the flow of Dyer’s otherwise action-packed narrative.

Both authors effectively argue that power politics will compound the effects of geographical, ecological and social shocks caused by climate change. The examples provided are numerous: increased migration will lead to further militarization of borders; altered trade routes and access to resources will shift power from one region to another; and clashes over diminishing food production and its distribution will have explosive ramifications. While one could question the implied causal relationships, once we accept that states are tools of social self-preservation infused with built-in systems of violence and exclusion, any hypothesis that proposes violent outcomes to changing circumstances is by no means exceptional, but rather realistic.

Dyer makes the important point, partially alluded to by Paskal, that we have a very narrow window of opportunity for action to avoid the worst geopolitical outcomes to the crisis. As the conditions get tougher, negotiating will get tougher. If we wait until we are hungry and thirsty before taking on the challenge of global warming, we may never achieve a workable consensus and roadmap. And without it, we might find ourselves trapped in a set course of disaster.

In the same way that climate change can become ensnared in a series of positive feedback mechanisms, which amplify causes and accelerate impacts, so too can the geopolitical system become infused with self-fulfilling prophecies. History teaches us that strategic posturing and arms races can set into motion unnecessary reciprocal tensions and eventually war. That being said, Paskal and Dyer accord too much space to such “us versus them” thinking. They define climate change as the main dynamic element in future international relations, and essentially rely on the premise that all else remains unchanged (e.g., militarized nation-states, classical economic theory, realism and a 1945 UN model).

When one considers the rise of cosmopolitanism in the world, non-state actors, shared cultures and the relative decline in racism, sexism and other forms of exclusion, it becomes possible to imagine an international system that would not, in the face of adversity, recoil to 19th century notions of patriarchy, statehood, nationalism and colonialism. Anchored in this business-as-usual thinking about geopolitics, Climate Wars and Global Warring both carefully illustrate the prospects for sinking or swimming in the coming currents, but neither entertains the possibility of building a boat that would float.