This sleek, assertive documentary hinges on two crucial but highly controversial premises. The first is that nuclear power has been distorted by the long shadow of the bombs dropped on Hiroshima and Nagasaki, and the justifiable fear and panic that followed disasters at Three Mile Island, Chernobyl and Fukushima.

This sleek, assertive documentary hinges on two crucial but highly controversial premises. The first is that nuclear power has been distorted by the long shadow of the bombs dropped on Hiroshima and Nagasaki, and the justifiable fear and panic that followed disasters at Three Mile Island, Chernobyl and Fukushima. The second is that humanity is facing a two-headed dilemma that it cannot solve without nuclear power: the need for massive CO2 emissions reduction to mitigate climate change and, contradictorily, the looming spike in global energy demand as citizens of China, India, Brazil and other nations scale up their lifestyles to match Western standards.

“The idea that we’re going to replace oil, coal and natural gas with solar and wind and nothing else is a hallucinatory delusion,” quips American author Michael Shellenberger, one of five environmental pundits who anchor the film by explaining why they’ve reversed their once-anti-nuclear positions. Director Stone, whose last film Earth Days (2009) lionized the seeds of the US environmental movement, is also a convert. And the aim of Pandora’s Promise is clear: to reframe America’s complicated relationship with nuclear development and convince other liberal thinkers to change their minds as well. 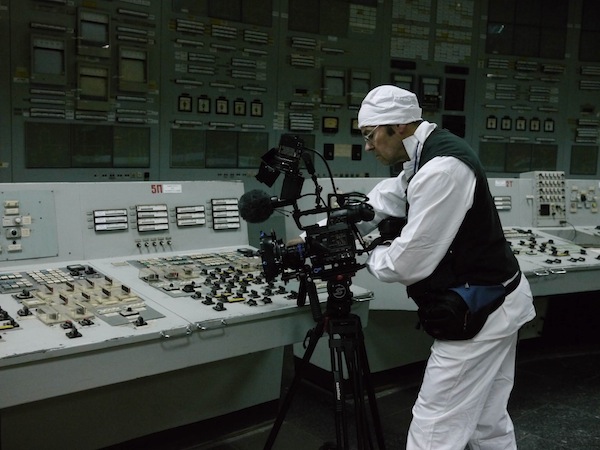 The film has some major flaws, not least its complete lack of balanced discussion. It has drawn criticism (especially from a US-based advocacy and educational group called Beyond Nuclear) for omitting inconvenient truths and relying heavily on the iconoclastic slant toward climate change issues taken by Shellenberger’s Breakthrough Institute. Pandora’s Promise also steers clear of the thorny idea that rogue states like Iran and North Korea claim to be pursuing nuclear capabilities for energy, not weaponry. Likewise, it trumpets the largely theoretical notion that integral fast reactors – the alternative to light water nuclear reactors, which were commercialized in the 1950s after that technology was adopted by submarines – can overcome the conundrum of nuclear waste disposal.

Stone’s handling of that challenge in particular leads to the film’s most ill-conceived moments. He tries to show that nuclear waste is not a monstrous problem with a few simple infographics and testimonial snippets – evidence as narrow as any set of made-for-TV political talking points. Anyone who watches Pandora’s Promise should also take 15 minutes to read the eight-page “Radioactive Wastes” chapter in Gar Smith’s 2012 book, Nuclear Roulette: The Truth About the Most Dangerous Energy Source on Earth. Among its many revelations: Finland’s unfinished and unproven Onkalo disposal site, the most promising effort to build a waste storage facility capable of lasting 95,500 years longer than anything else humans have ever created, would only have room for “about one per cent of the world’s growing stockpile of radioactive garbage, now estimated at between 250,000 and 300,000 tons.”

All that said, Stone’s train of thought is packed with intrigue. Accepting the fact that we simply don’t have the cultural willpower to curb our energy consumption is sober and pragmatic. He holds up France’s energy regime as exemplary (comparing it to renewable powerhouse Germany, which has double the carbon emissions) and argues that there are more sides to Chernobyl’s story than catastrophe. He also exposes how oil and gas companies aided protests in the 1980s against a nuclear plant in Shoreham, New York, cynically buying ads to help promote solar because they knew renewables couldn’t possibly supply adequate power to the area.

Stone’s examination of natural background radiation in cities and at high altitudes is also fascinating, and suggests that contamination risks are widely misunderstood. Watching British author Mark Lynus, one of the film’s other now-pro-nuclear environmentalists, collect radiation readings while rationalizing his choice is one of the film’s great moments, especially given the whiff of self-doubt that emerges while measuring the scorched fringes of the Fukushima evacuation zone. 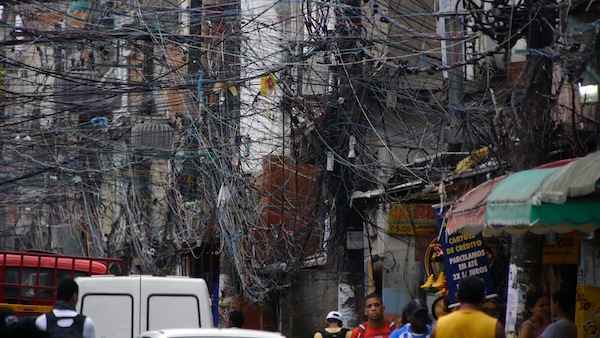 Electric wires in a slum in Brazil in a scene from Pandora’s Promise. Photo credit: Robert Stone

The director also makes an example of outspoken nuclear critic Helen Caldicott for falsely accusing governments and industry of a massive cover-up. Stone insists that she is using exactly the same tactic that climate change deniers use to condemn climate scientists. There may be credence to his accusation, but some viewers will undoubtedly find the approach he takes somewhat troubling.

Ultimately Pandora’s Promise is an assemblage of biting provocations – one of the most succinct comes from atomic weapons historian Richard Rhodes, who says the industry’s pioneering physicists converted him: “To be anti-nuclear is basically to be in favour of burning fossil fuels.” Many will see this documentary as little more than evidence of a progressive director turned shill for the nuclear industry. Whether or not you agree with what Stone would call enlightenment, the film certainly encourages viewers to rethink their feelings about nuclear power. Ideally we’ll all start by researching the stories left untold by this one.

Subscribe now to get more reviews in your mailbox!

Eric is the founder and executive director of Night\Shift, downtown Kitchener’s nocturnal adventure festival, and he helped craft the rebranding of A\J as its editor-in-chief (2012-2014). He has a dusty Bachelor of History from uWaterloo and has worked as a journalist in Canada since 2000, holding editing positions with up! Magazine (WestJet Airlines’ in-flight publication), Adbusters, Reader’s Digest and other publications, and contributing as a writer to Canadian Geographic, Maisonneuve, Canada’s History, Swerve, Saturday Night and others. He also used to curate a blog about great Canadian record cover art at lpwtf.tumblr.com.