19 hours ago
Wolf Culls: Public Trust or Failed Policy?
5 days ago
Earth Day: Origins
6 days ago
Joining Hands: The Decade of Action on the SDGs
2 weeks ago
Nature-based Solutions for Climate Change Mitigation
2 weeks ago
“Now is the Time” 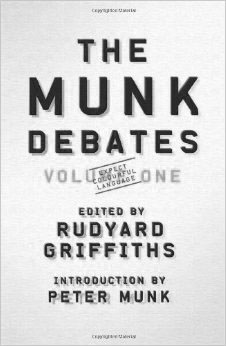 What do you call four adults viciously attacking one another in front of a sold-out audience screaming for blood? No, this is not the next generation of ultimate fighting. This is debating, Munk style.

The Munk Debates consists of transcripts of the first five debates hosted by the Aurea Foundation. According to its benefactor, businessman Peter Munk, the purpose of the debates is to “create a forum that attracts the best minds and debaters to address some of the most important international issues of our time.”

To this end, the first five debates addressed whether the world is safer with a Republican or Democrat in the White House; whether the international community should intervene in human-made humanitarian crises, such as those in Zimbabwe, Burma and Sudan; whether foreign aid does more harm than good; whether climate change is humankind’s defining crisis and demands a commensurate response; and finally, whether it is preferable to get sick in Canada or the US. To date, the debates have featured a who’s-who of speakers, including retired general Rick Hillier, actor Mia Farrow, diplomat Stephen Lewis and scientist Bjørn Lomborg.

The Munk Debates falls into the realm of “post-normal science,” in which the facts are uncertain, the stakes high, the values in dispute and decisions urgent. In situations like this, it is easy to play on uncertainty and distort facts, something Elizabeth May accused Bjørn Lomborg of doing with regard to climate change in their encounter. Bullshit and character assassination play prominent roles. Emotion is common and perhaps recklessly used. Former US Senator William Frist opened and closed his case for US health care with the claim, “If your daughter has cancer, you want the best for her and you want it now!” Of course I do, but is this really what we should be talking about?

Competitive debate is not designed for constructive dialogue. Rather, it is about convincing the audience that you are right. At the Munk events, the audience is polled before and after each debate to determine who “wins.” To help keep scoring clear, such debates are usually framed around a polarizing statement that encourages debaters to argue points they may not fully believe. The question on foreign aid, for instance, was whether or not foreign aid does more harm than good. Debaters were forced constantly to bring the argument back to the intrinsic nature of aid, and neglect the more salient issue of how foreign aid is undertaken.

Despite my newfound dislike of debating, I learned a great deal by reading this book. The debates featured recurring themes, such as corruption and fragility in Africa, the future of US supremacy and the rising ambitions of China (generally with unsparing disapproval of China’s human rights abuses).

The debaters referenced participants in previous or upcoming dialogues often, a reflection of the interrelated nature of the issues. As the debaters sparred, more-over, they revealed implicit worldviews about capitalism and socialism, the benefits of progress and economic growth, and the potential for technology to save the day.

Should you read this book? It depends on how much you like books that make you hot under the collar. Is there a better way to present this material than polemic rhetoric, and what Robert Gibson called “bullshit” in Alternatives, 37:1? I truly hope so. Still, this book raises so many interesting and important points that it will crown you king or queen of the water cooler for months to come.

Lndwdi1wYWdpbmF0aW9uLW5hdi1saW5rc1tkYXRhLXRvb2xzZXQtdmlld3Mtdmlldy1wYWdpbmF0aW9uLWJsb2NrPSJjZGZkNGM0NzM3YjI4OThlYmE0NDQzZGQ1OWExYmY1MCJdIHsgdGV4dC1hbGlnbjogbGVmdDtqdXN0aWZ5LWNvbnRlbnQ6IGZsZXgtc3RhcnQ7IH0gICBoMi50Yi1oZWFkaW5nW2RhdGEtdG9vbHNldC1ibG9ja3MtaGVhZGluZz0iYTRiMmE5MzQ1ZWQ2YTJjM2EyM2U0Y2U5NzZhMDgyZmEiXSAgeyBib3JkZXI6IDFweCBzb2xpZCByZ2JhKCAwLCAwLCAwLCAxICk7IH0gICAgQG1lZGlhIG9ubHkgc2NyZWVuIGFuZCAobWF4LXdpZHRoOiA3ODFweCkgeyAgICAgICB9IEBtZWRpYSBvbmx5IHNjcmVlbiBhbmQgKG1heC13aWR0aDogNTk5cHgpIHsgICAgICAgfSA=
Kyrke Gaudreau
Lndwdi1wYWdpbmF0aW9uLW5hdi1saW5rc1tkYXRhLXRvb2xzZXQtdmlld3Mtdmlldy1wYWdpbmF0aW9uLWJsb2NrPSJjZGZkNGM0NzM3YjI4OThlYmE0NDQzZGQ1OWExYmY1MCJdIHsgdGV4dC1hbGlnbjogbGVmdDtqdXN0aWZ5LWNvbnRlbnQ6IGZsZXgtc3RhcnQ7IH0gICBoMi50Yi1oZWFkaW5nW2RhdGEtdG9vbHNldC1ibG9ja3MtaGVhZGluZz0iYTRiMmE5MzQ1ZWQ2YTJjM2EyM2U0Y2U5NzZhMDgyZmEiXSAgeyBib3JkZXI6IDFweCBzb2xpZCByZ2JhKCAwLCAwLCAwLCAxICk7IH0gICAgQG1lZGlhIG9ubHkgc2NyZWVuIGFuZCAobWF4LXdpZHRoOiA3ODFweCkgeyAgICAgICB9IEBtZWRpYSBvbmx5IHNjcmVlbiBhbmQgKG1heC13aWR0aDogNTk5cHgpIHsgICAgICAgfSA=
Kyrke Gaudreau is the Sustainability Manager at the University of Northern British Columbia. Dr. Gaudreau completed his PhD in social and ecological sustainability at the University of Waterloo where his research focused on the sustainability assessment of energy systems. He has consulted on various strategic and environmental assessments of energy systems in Canada, and has researched and written about energy systems sustainability in several different countries.