In June 2009, Thomas Berry, the historian, priest, author and self-described “geologian,” passed away at his home in Greensboro, North Carolina. He was 94.

Uniting recent scientific discoveries concerning the provenance and progression­ of the universe with religious insights into the nature of creation, Berry’s writing blended empirical and spiritual elements into a unique cosmological narrative. His challenge­ in later life was to place ecology and cosmology at the centre of our personal and institutional lives.

In June 2009, Thomas Berry, the historian, priest, author and self-described “geologian,” passed away at his home in Greensboro, North Carolina. He was 94.

Uniting recent scientific discoveries concerning the provenance and progression­ of the universe with religious insights into the nature of creation, Berry’s writing blended empirical and spiritual elements into a unique cosmological narrative. His challenge­ in later life was to place ecology and cosmology at the centre of our personal and institutional lives.

His work has profoundly affected religious activists, such as the “green nuns” – Roman Catholic sisters who have transformed their properties into community-supported agriculture and Earth-literacy centres – as well as policy makers, lawyers, scientists, health professionals and politicians. Al Gore, for example, quoted Berry in his 1992 book Earth in the Balance and twice invited him to the Clinton White House to advise on ecological matters. With his works now archived at Harvard University, Berry remains a compelling figure for those who strive for a deeper meaning in their quest to befriend, rather than besmirch, the planet.

In two recent volumes, The Sacred Universe and The Christian Future and the Fate of the Earth, Berry’s pioneering thoughts are chronicled, aided by two former students, Mary Evelyn Tucker and John Grim. Both from Yale University, they are co-founders of the Forum on Religion and Ecology, and leaders in the emerging interface of world faiths and the fate of the Earth.

Many of the essays in these books originated as mimeographed reflections for friends and members of the American Teilhard Association, which Berry presided over for more than a decade. Despite their humble beginnings, these essays help chart the transformation of a Roman Catholic priest and cultural historian to a path-finding Catholic interpreter of Asian religions, and finally to a premier sage of the spiritual character of our current ecological malaise.

The fact that Berry, after reading most of the great medieval theological classics (such as Thomas Aquinas’ hefty Summa Theologica) in the original Latin, learned both Chinese and Sanskrit in mid-career, attests to his unusual gifts as a scholar. Despite such erudition, these are not peer-reviewed articles for the traffic of publishing; they are Berry’s attempt to find the proper place of humanity within the unfolding cosmos. As such, they constitute important, enduring landmarks on the journey of a distinctive and humbly prophetic voice for the planet and the universe in which it spins.

In The Sacred Universe, a collection of essays from 1972 to 2001, we see a ripening of Berry’s thought, and the evolution of a mind that strives to place the current ecological crisis within a deeper cosmological context. Throughout his life, Berry was, to quote Einstein out of context, a “cosmological constant.” When some tried to subsume the environmental movement under a social justice rubric or a particular religious agenda, Berry was unyielding. He argued consistently that the universe is “our primary sacred community,” the only “text without a context,” and as such cannot become a subset of human intellectual hubris.

With his statement that the universe is “a text without a context,” Berry is making a profound metaphysical claim. He is reinforcing the basic fact that the universe is autonomous of the human subject. In this way, he is perhaps carving out of the cosmos a metaphysics that is distinct from prevailing modern and postmodern belief systems.

On one hand, Berry’s assertion is a critique of our modern understanding of nature in purely materialistic terms. His notion of the universe as a text without a context is a challenge to modernity’s tendency to separate humanity from the rest of nature, with the former destined to subdue the latter. Berry is granting the rest of the universe an identity independent of this agenda.

With his “uncontested cosmos,” Berry is on the other hand eschewing the postmodern notion that nature does not have any existence outside human representation. In this postmodern trajectory, nature is simply a human construct. Both belief systems lead to a deep and limiting anthropocentrism, where reality is assessed through an exclusively human perspective. Berry suggests a different type of metaphysics, one that includes sacredness and awe as primary responses to the unfolding universe; one that critiques modern and postmodern belief systems and strives for a new way of understanding the human-Earth relationship.

Influenced by the Jesuit paleontologist and theologian Pierre Teilhard de Chardin (1881-1955), Berry suggests that all matter has a “psychic-spiritual dimension.” In other words, the universe is a “communion of subjects, not a collection of objects.” This is a door that Berry opens to allow a sense of the divine and the sacred back into our contemporary understanding of the world. If one has ever thrilled to a star-strewn sky on a soft summer’s evening, or felt an overwhelming sense of awe gazing upon a storm-tossed ocean, then one has a sense of the spiritual dimension to which Berry refers. 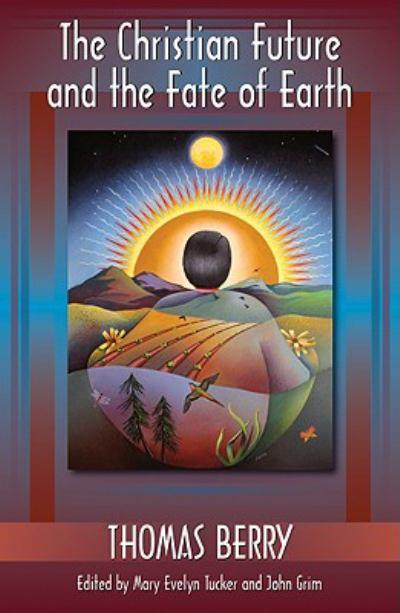 The Christian Future and the Fate of the Earth focuses on the Christian implications and import of Berry’s work, something that was not accented in his lectures and writings, despite his vocation as a priest.

In reflecting on the role of the church, Berry sees Christianity’s primary task not as dispensing sacraments or gaining more converts, but as raising awareness about the deeper mysteries and workings of the universe: We need to know how the solar system and Earth came into being, how life developed on the planet, and, finally, how we ourselves appeared and what our human role has been within this amazing process. All these things need to be understood as aspects of a spiritual as well as a physical process. Only such comprehensive and deep understanding can restore the integral functions of planet Earth upon which human well-being depends. This is the fundamental task of the Church in the twenty-first century.

With this “cosmological manifesto,” Berry moves well beyond Christian notions of stewardship, with its tinge of managerial oversight over creation, and invites us into the idea of co-creation with the Creator. For Berry, the context for environmental activism and reflection is not simply our local ecosystem, and not simply Gaia, the living Earth, but the entire cosmos.

It may strike some as strange, in this age of televised creationist Christian fundamentalism, to hear a Roman Catholic priest entwining his spirituality with evolution and the natural processes of the Earth. But Berry claims a long pedigree, from St. Paul through Aquinas to contemporary mathematical cosmologists such as Brian Swimme and biologists such as E.O. Wilson, who have blended theories of natural law with questions of metaphysics and the spirit.

By placing ourselves in critical engagement with the cosmos, we are met not only with wonder and mystery, as Berry claims, but with the imaginative powers needed to deal constructively and fruitfully with our ecological moment. This is the legacy of hope that Thomas Berry has bequeathed us, and which these two volumes help illumine.

Stephen Bede Scharper, a columnist for the Toronto Star, is an associate professor with the Centre for Environment at the University of Toronto. He is author of Redeeming the Time: A Political Theology of the Environment and co-editor of The Natural City: Re-Envisioning the Built Environment.