AFTER EIGHT YEARS experimenting in the subtropical forests of East-Asia, Chinese researchers have uncovered the key to increasing a forest’s ability to sequester carbon.

Carried out by researchers at Martin Luther University Halle-Wittenberg, the German Centre for Integrative Biodiversity Research and the Chinese Academy of Sciences, the unique field study sought to quantify the effects of low and high biodiversity in forest ecosystems. We know that forests can act as sinks for the planet’s carbon emissions – but many studies showing this correlation were either purely observational or performed as a small-scale experiment.

Lead author Yuanyuan Huang from the University of Zurich (and his 63 co-authors from 32 academic institutions) wanted to explore the cause of this correlation. “By only observing natural forests, it was impossible to conclude that higher biodiversity was the cause of the higher productivity,” Keping Ma, manager of the Biodiversity Ecosystem Functioning (BEF) Project and member of the Chinese Academy of Sciences, told the South China Morning Post. “By planting 150,000 trees ourselves, we could control the conditions and prove that a forest with a large number of tree species is more productive than a monoculture.”

In other words, does the makeup of forests, be they mono- or polyculture, impact their ability to absorb carbon?

Planting trees to understand them

Answering this question proved no easy task. Beginning in 2009, 150,000 trees across 53 hectares were planted in the Xingangshan area of Jiangxi Province to be studied for precisely this purpose. Working at the BEF, a plantation in the mountainous region of Southeastern China 400 kilometres west of Shanghai, researchers were able to analyze how varying degrees of species richness, extinction scenarios, element cycling and their respective long-term effects would have on the subtropical forest ecosystem.

For eight years, researchers gathered data from two plantations containing three pools of land that varied in species richness. These pools overlapped and could create areas with different compositions of trees for a total of 69 different possibilities. Two monocultures – sites with only one tree species – were planted as a control. 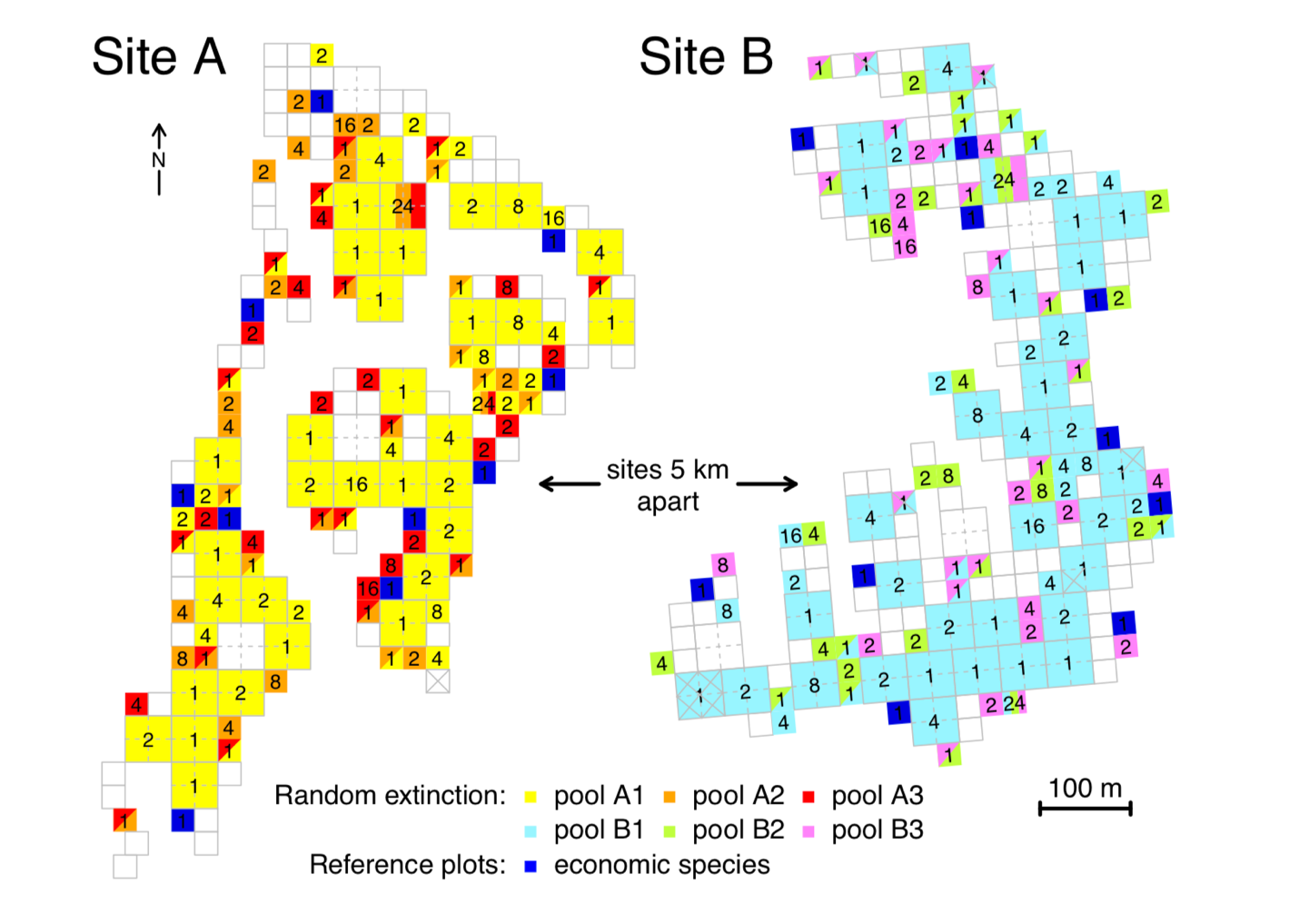 The composition of each site/science.sciencemag.org

The results, published this month in Science, found that while monocultures were capable of storing an average of 12 tons of carbon per hectare, the pools rich in species diversity accumulated an average of 32 tons of carbon on plots the same size. Researchers were able to quantify for carbon storage by measuring the aboveground biomass of each tree, which increases as trees accumulate more carbon through photosynthesis.

“The full level of carbon sequestration and thus mitigation of global warming can only be achieved with a mix of species,” said Bernhard Schmid, senior study author and evolutionary biologist at the University of Zurich.

An array of tree species not only stores carbon more efficiently than monocultures, but also supports a more robust ecosystem. They’re healthier, for one thing. And by maintaining an optimum level of biodiversity among its inhabitants, every forest ecosystem would be better capable of increasing its resiliency against destabilizing environmental changes. For forest planners, higher biodiversity may offer longer term stability and higher productivity.

Yet it’s a mystery as to how species richness increases carbon absorption. Previous studies have pointed to diverse, densely arranged canopies as a more efficient system for capturing light. But this was not the case at Xingangshan. The study did, however, find that for less biodiverse forests and plantations, having functional diversity can make the differences between species’ beneficial to the overall community.

All of which raises the question – Are we going about forest revitalization all wrong?

Many NGOs and environmental professionals have advocated for planting as many trees as we can, though the team’s findings suggest this may be far from the most effective means of reducing our planet’s ever-increasing carbon dioxide levels.

Many countries have not yet realized the shortcoming of monocultures, opting instead to plant row after row of like trees in a moonscape of monoculture. China, for instance, has allocated 1.5 million hectares for reforestation since 2010. Yet the potential for more efficient carbon sequestration was wasted as the plantations were mostly fast-growing monocultures. In Canada, urban forests are often monocultures lacking in genetic diversity; even public land in more northern regions are typically monocultures of native trees, due to regulations regarding what trees can be planted on public property.

But make no mistake. Increasing forest biodiversity, whether rainforest, urban, rural or northern, can reduce carbon-induced pollution and create stronger, healthier forest ecosystems that benefit everyone.

Hai Lin studies Conservation Biology and Biodiversity at University of Toronto. She’s interested in sustainability, green economies and baking. In her spare time, she likes to visit botanical gardens and pretend she lives in a tropical forest rather than a concrete jungle.

If you liked this article, please subscribe or donate today to support our work.

A\J moderates comments to maintain a respectful and thoughtful discussion.
Comments may be considered for publication in the magazine.

OPERATION ENVIRONMENT, Coming to a Mailbox Near You in January 2021!

WTF 2020
This is the Week This Friday 2020 version! The best and worst environmental stories of the year.

A\J 2020: ONLINE YEAR-IN-REVIEW
Take a nostalgic trip to the past with us as we look back on some of our greatest strides of 2020.
OPERATION ENVIRONMENT
Check out these references to learn more about the content featured in our next issue: Operation Environment!

Uninhabitable Earth: Life After Warming
Having an awareness of the worst possible climate change scenarios can be motivating rather than...
END_OF_DOCUMENT_TOKEN_TO_BE_REPLACED