On the Hunt for Narwhals

There was once an Inuit woman with long, luxurious hair who had a blind son. She was unkind and exploited her son’s blindness by taking the fruits of his labour. Her deceit and cruelty drove her son to one day murder her, drowning his mother while she harvested white whales. In the water, her straight long hair twisted tight, eventually becoming a horn. The woman emerged from the experience as the ocean’s first narwhal.

Though this story is a piece of Inuit folklore, for others, the narwhal represents mystery, inspiring curiosity in humans. Referred to as “unicorns of the sea,” narwhals live up to their mystical reputation. Their peculiar horn-like tusk and the difficulty researcher face in tracking them makes them attractive subjects for folklore and academics alike.

Each summer the Arctic Ocean – where narwhals live – is warming due to increasing solar radiation. With the tundra blooming and the land losing its snowy cover, in some ways the Arctic has become increasingly attractive for many northern species. Pods of narwhals come out of hiding from their wintering grounds and travel to Tremblay Sound in Nunavut, above the Arctic Circle.

Tremblay Sound branches off from Tallurutiup Tariunga, also known as Lancaster Sound. Sandwiched between Baffin Island and Devon Island, Tallurutiup Tariunga serves as the entrance to the Northwest Passage and a migration route for many Arctic marine species. This gateway has always been a popular feeding ground for narwhals migrating from wintering locations in Baffin Bay, Davis Strait and the Greenland Sea. According to World Wildlife Fund, 75 percent of Earth’s narwhals, as well as local Inuit, rely on these waters for sustenance.

“Researchers and DFO know the narwhal come to this location but they don’t really know why."

Alongside Pond Inlet and Admiralty Inlet on Baffin Island, Tremblay Sound is also one of many habitats where narwhals choose to summer. The Department of Fisheries and Oceans Canada (DFO), alongide the World Wildlife Fund’s Arctic Programme and the University of Windsor, has acknowledged the abundance of narwhals at Tremblay Sound as an oddity. To study this unexpected collection of narwhals, DFO and its cohorts have established the Ecosystem Approach to Tremblay Sound, a collaborative research project that aims to examine these species and their interactions here.

Melanie Lancaster, a conservation biologist and arctic specialist with WWF Arctic Programme, visited Tremblay Sound at the end of July. “Normally [the site] contains about 4,000 narwhals,” she told A\J. “Researchers and DFO know the narwhal come to this location but they don’t really know what they do. We don’t really know why they come here and why to this particular location in the Canadian Arctic. The program seeks to understand that.”

And not just narwhals, but the broad array of biodiversity frequenting the region. To that end, Lancaster and the team are also paying close attention to Greenland Sharks and other fishes in the area. “The whole program has an aim to understand why the animals are there and what they need the area for, specifically, so that the area can be better managed.” 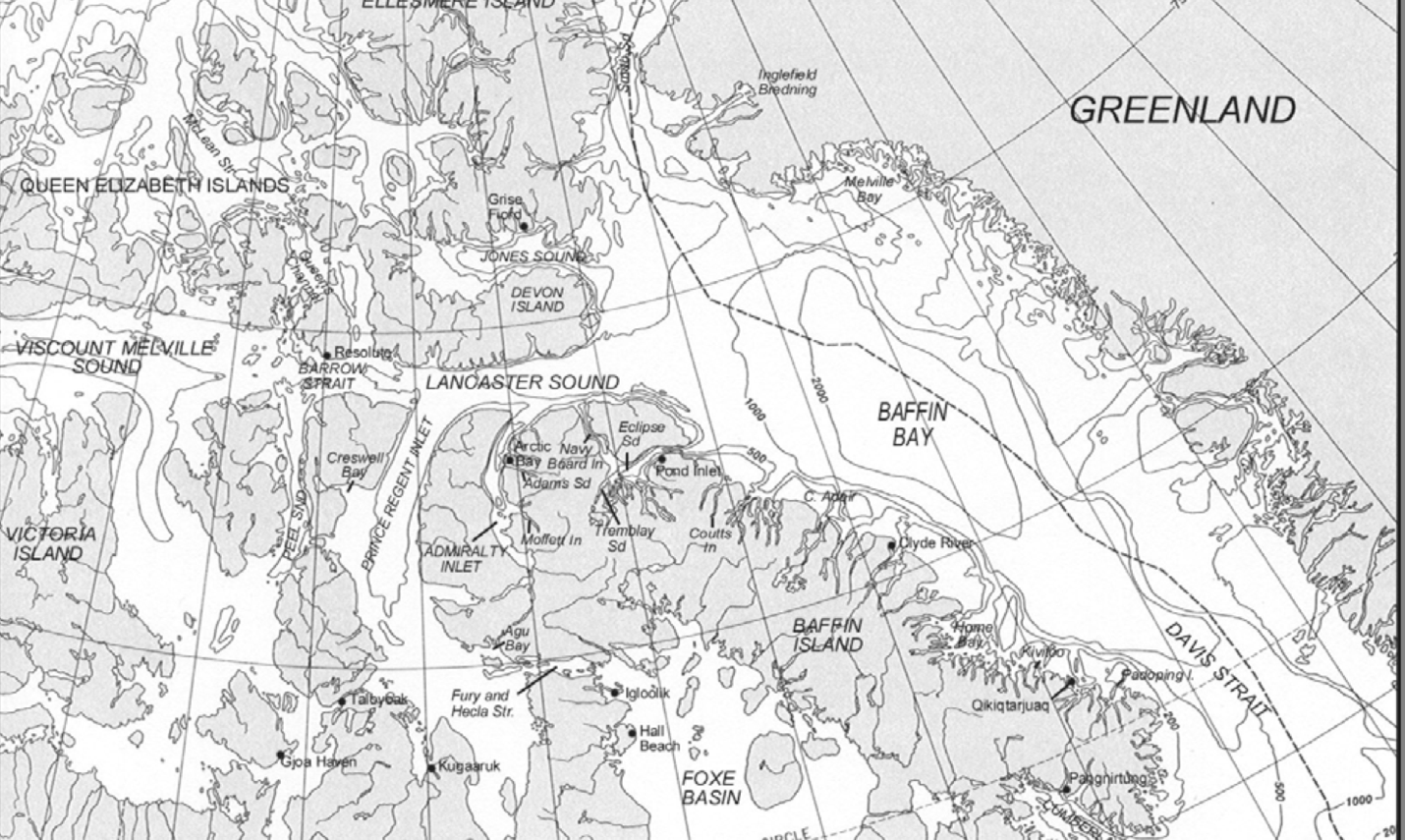 Tallurutiup Tariunga, also known as Lancaster Sound, is home to a broad array of narwhals and other Arctic marine species/sararegistry.gc.ca

What makes the Ecosystem Approach to Tremblay Sound project unique is their usage of innovative technology in tracking marine animals. “One of the things WWF is doing this year is using drones to understand why narwhals are there at Tremblay Sound,” Lancaster said. The Arctic is a difficult place to conduct research on any species. It’s a massive geographic space, Lancaster said, and animals are often spread out. Or underwater. “Doing research on anything from narwhals to walruses can be pretty challenging.”

Moreover, its extreme temperatures and harsh environment can limit species richness, allowing only for the survival of Arctic specialists. And for half of the year, the region is covered by ice and existing in all but the absence of sunlight, limiting the timeframe of many research activities.

But technology can help change that. One of the research team's first tasks at Tallurutiup Tariunga is to attach satellite trackers to narwhals. “They have a GPS function that will inform the researcher of where the narwhal goes, when they leave Tremblay Sound, what they’re doing [and] when they’re migrating,” she said.

That’s when the drones come out and collect visual data on narwhals and their behaviour in the Sound. “We can answer questions such as, ‘Is it an important calving area? Or is it an important nursery area? Are they just coming in to raise calves? Do they actually live here?’” Lancaster told A\J. “The drones give us a birds-eye-view.”

Not only are team members tracking what’s happening above the water – they are also keeping track of what goes on beneath the waves. Using large rocks as anchors, the team has implemented an underwater audio monitoring system to remain in place even after the Arctic field project is over, transmitting data to researchers working down south.

These new technologies will enable Fisheries and Oceans and WWF researchers to uncover the significance of Tremblay Sound for narwhals. Lancaster speculates that Tremblay Sound may be home to valuable prey species that attract narwhals to rich food supplies. The conditions of Tallurutiup Tariunga in the summer, things like water depth and temperature, may also make the waterway an ideal nursery habitat, information the data will, one day, make clear.

The Committee on the Status of Endangered Wildlife in Canada has deemed narwhals a species of special concern because of anthropogenic stressors. These and other stresses have recently swept up the Inuit tradition of hunting Arctic animals, particularly seals, occasionally causing alarm among the global community. For her part, Lancaster is confident Indigenous hunting practices pose no threat to narwhal’s conservation status. “Hunting activities could potentially pose extra pressure on narwhals,” she said, “but as long as it’s managed and done sustainably, the WWF isn’t opposed to it.”

Climate change, however, poses a significant threat to narwhal population dynamics. Narwhal pods, including those at Tremblay Sound, will be disrupted by melting ice and proposed new shipping routes through the increasingly ice-free Arctic. Since narwhals use sound to communicate, ship noises will affect the relationship between mothers, calves and other pod members, potentially separating families during migration.

Narwhal pods, including those at Tremblay Sound, will be disrupted by melting ice and proposed new shipping routes through the increasingly ice-free Arctic.

Previous research by the University of Washington and the Greenland Institute of Natural Resources show that dramatic changes in ice patterns and flow will increase the risk that narwhals may become trapped in fast-moving ice. Since narwhal pods are extremely loyal to Tremblay Sound, changes in their summer and winter habitats could make the species especially vulnerable to rapidly shifting ecosystems. By implementing their Ecosystem Approach project, DFO hopes to gain insights about local ecology and the life histories of numerous species that reside there to determine the most effective ways of managing and conserving Tallurutiup Tariunga.

Local Inuit populations are also active in pressuring the Canadian government to preserve Tallurutiup Tariunga. They fear that, along with loss of food sources, a significant part of their self-reliant culture that depends heavily on Arctic species will be lost.

Starting at the end of July, Fisheries and Oceans and World Wildlife Fund, in collabration with Indigenous and academic partners, have set up camp at Tremblay Sound, documenting their findings on the WWF–Canada Arctic blog. Inuit researchers like Jobie Atagootak have provided indispensable local knowledge and input, everything, the team notes, from conducting the best research to surviving camp life in the high Arctic.

On their blog, Lancaster and colleague Tom Arnborn document the arrival of a narwhal pod just days after setting up camp:

Suddenly a group swims by, so close to shore that we can almost reach out and touch them. A tusk emerges out of the water – likely how the myth of the unicorn began. Narwhals do not have a fin on their backs so they can easily swim amongst the sea ice. The calves are dark grey, becoming more speckled with age. They don’t take notice of us as they travel past, seemingly intent on their destination. Now our adventure really starts! Narwhals galore!

With more discoveries sure to come in the following weeks, researchers will be one step closer to uncovering the enduring mysteries of the narwhal.

Hai Lin studies Conservation Biology and Biodiversity at University of Toronto. She’s interested in sustainability, green economies and baking. In her spare time, she likes to visit botanical gardens and pretend she lives in a tropical forest rather than a concrete jungle.

If you liked this article, please subscribe or donate today to support our work.


More from The Wild Side

A\J moderates comments to maintain a respectful and thoughtful discussion.
Comments may be considered for publication in the magazine.

Call for Designer!
SHOUT IT FROM THE ROOFTOPS! A\J IS LOOKING FOR A DESIGNER!

REGROWTH‌
How to Repair Your Relationship with Nature

in Food and Culture

Uninhabitable Earth: Life After Warming
Having an awareness of the worst possible climate change scenarios can be motivating rather than...
END_OF_DOCUMENT_TOKEN_TO_BE_REPLACED