Do you remember the American chestnut? If I plopped you in front of one without a field guide or search engine, would you recognize it? If I dumped a bag of native nuts on the table in front of you, could you identify the one which previously fed eastern North America?

As recently as 1900, the American chestnut alone accounted for a full quarter of all trees from Mississippi to Maine, famous for rising head and shoulders above all competition to establish near monopolies over the sunlight. Their trunks were as straight as strata, their wood among the most rot resistant in nature, their seasonal shower of chestnuts nourishing no fewer than 275 species with protein and fat, humanity included.

And we doomed them, all of them, in 1876 when a mail-order tree nursery in New Jersey accidentally introduced Cryphonectria parasitica to North America, a ferocious fungus native to East Asia against which our native chestnuts had no defence. Once it has penetrated its victim’s bark, this fungus acidifies the trunk and feasts on the resulting deadwood until the tree cannot support its own weight. Spreading effortlessly from one chestnut to the next, Cryphonectria parasitica manifested one of the deadliest plagues in arboreal history – Chestnut Blight.

So lethal was this invasive ailment that 4 billion chestnuts were dead by 1950, including those of southern Ontario, the northern limit of the tree’s historic range. Industries collapsed, species went extinct, cultures scrambled to reinvent themselves without the bounties of the American chestnut, and then we moved on. The remaining American chestnuts of Canada and the United States are variously sick, dying, isolated, or growing beyond the reach of the blight, and most of us pass them by without an upward glance. 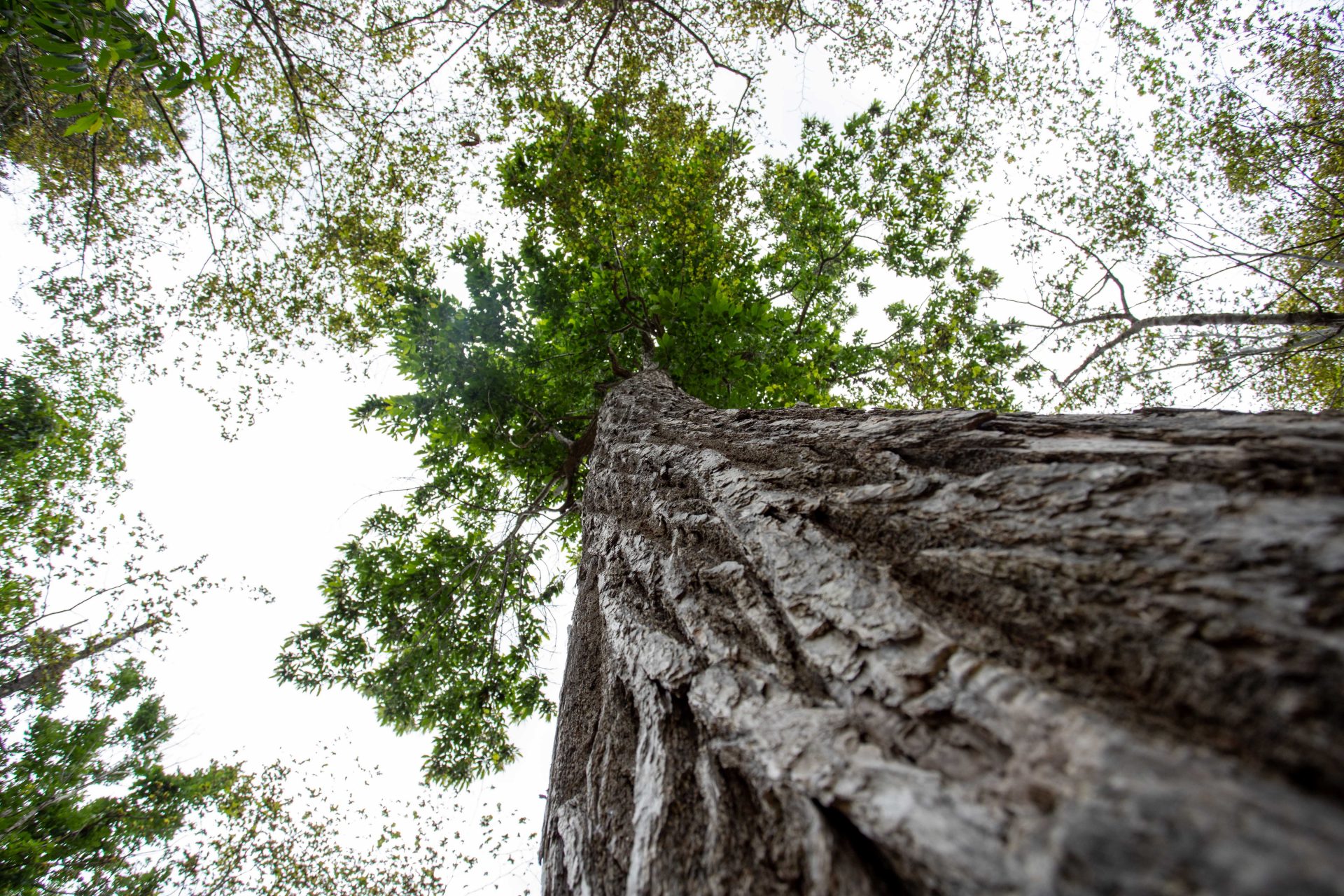 This is a problem, because the American chestnut was neither the first nor last of our native trees to fall to an invasive pest. The American beech, for instance, once accounted for half of all trees in the Canadian Maritimes, another prodigious producer of nuts on which considerable wildlife depended, but now this tree is rare, grotesque, crippled by a black rot which stunts a once proud species. We call it Beech Bark Disease, triggered by an invasive insect imported from Europe in 1890. The American elm suffered much the same fate, falling to Dutch Elm Disease in droves throughout the 1900s, as did the Butternut tree, fatally infected by yet another invasive fungus, Ophiognomonia clavigignenti-juglandacearum.

The Eastern hemlock is collapsing at this very moment, dying by the billions from the invasive Hemlock Woolly Adelgid, an aphid-like creature imported from East Asia in the 1950s. Several species of Ash are succumbing to the Emerald Ash Borer. Our forests are playing an arboreal game of musical chairs, each tree rising to fill the void left by its predecessor, entire ecosystems shift in their understories.

The human obsession with trees is not misplaced. They are the megaflora of the plant kingdom, the giants on which the rest of life is based, the givers and takers who decide which species will prosper and which will not. Different trees bear different gifts, support different ecosystems, and as they are culled from our forests, families of plant, animal and fungus vanish in turn, our biodiversity shrinking, recoiling, simplifying to the detriment of all. Cutting down infected species and moving on is an exercise in futility, because if nothing else, we will eventually run out of trees.

And here I return to the American chestnut, because by virtue of its fame, conservationists across the continent have brought every tool to bear on an intractable problem – permanently defeating an invasive pest.

The Canadian Chestnut Council was founded in 1988 to do exactly that. For decades now they have identified and tracked the surviving 2,000 chestnuts of southern Ontario, breeding them, studying them, and following up every possible solution to the Chestnut Blight, but their most promising to date only took root in the year 2000.

Within every population there is genetic diversity, allowing each individual of any given species to approach survival in a slightly different way, and American chestnuts are no different. Some produce larger nuts which are more attractive to wildlife, while others produce smaller nuts, more easily carried by birds to distant locales. Some prefer warmer climates and so dominate the Carolinas, while others have adapted to the cold, pressing into northern Maine. Some approach immunity in a way which shields them nicely from the many ailments native to North America, and some, by pure chance, have just the right blend of genes to combat new threats entirely, like the Chestnut Blight.

Following this line of reasoning, the Canadian Chestnut Council identified the 26 healthiest and hardiest American chestnuts in all of southern Ontario, reasoning that each of these trees must have at least some inborn capacity to resist the Chestnut Blight, however modest. Breeding these 26 trees together they produced 643 seedlings, and, once of a certain size, each was inoculated with the Chestnut Blight. Those individuals which resisted the disease most vigorously were bred together again, producing a second generation. This process was repeated to produce a third generation, which went in the ground in 2020, trees in which a natural resistance to Chestnut Blight, once scattered across 26 parents, should have been concentrated. And to the amazement of many, it’s working.

Some trees in this breeding program have lived with lethal doses of Chestnut Blight for 20 years now, considerably longer than would their wild counterparts. Whatever mechanisms these trees employ to combat the blight have become intensified in each successive generation, so much so that the Canadian Chestnut Council predicts their fourth generation of trees will be ready for mass distribution. Before the decade is through, they hope to plant blight resistant seedlings in the wild, capable, perhaps, of surviving for centuries.

It’s a powerful idea, and a remarkably practical one. The Canadian Chestnut Council’s annual budget – which covers all of their restorative work, not merely the breeding program – is only $100,000, and all the progress they’ve made thus far has been achieved on only 30 acres of land. With these modest investments they may resurrect a species.

This is not a novel approach. The American beech was adopted into exactly this kind of breeding program in 2004. The American elm is likewise the subject of the breeding program at the University of Guelph dating back to 1998. The reason this approach has never once worked is not the fault of the technique, the science, or the people. The agricultural sector successfully breeds blight-resistant potatoes all the time, after all. The issue is instead of consistency, of personnel, of commitment and especially of funding.

Because the lives of native trees are measured in decades or centuries, the exchange and concentration of hardy genes takes time, and the economic returns take longer still. Efforts to breed trees resistant to the Beech Bark Disease, for instance, were refunded by the federal government in 2011 before they could produce significant results. The work of the Canadian Chestnut Council is a fortunate exception, retaining good people and steady funding for over twenty years, but there’s still more to do.

Such programs could have enormous benefit to Canadian biodiversity, with relatively small investments of money, expertise and land, but they would take time, and require a fundamentally different approach to the spread of invasive disease. We should be examining the wreckage of collapsed populations of trees, scanning for signs of natural resistance and mustering the courage to piece it all together. There are, at this moment, stands of so-called “bullet-proof” Eastern hemlocks apparently unfazed by the invasive Hemlock Woolly Adelgid. This should be a call to arms, not an excuse to preemptively cut as many Eastern hemlocks as possible and replant with something else. This all-too-common approach eliminates the genetic diversity on which the future of these trees depends, and from which breeding programs must ultimately draw.

Whatever the final solution, be it breeding for resistance or something else entirely, we as a nation must stop forsaking our native trees. In their shade resides our natural heritage, of which we shouldn’t be so willing to let go.

W2RhdGEtdG9vbHNldC1ibG9ja3MtaW1hZ2U9ImFjZGQ4ODc1NDU3NjM5YTllMTlmNWVjYWFlYmM3MmQ0Il0geyBtYXgtd2lkdGg6IDEwMCU7IH0gIFtkYXRhLXRvb2xzZXQtYmxvY2tzLWltYWdlPSIzMmYxMDc2ODUyZWZmZWU1ZGZjMzQ1N2VmZWM1MjEzYiJdIHsgbWF4LXdpZHRoOiAxMDAlOyB9ICBAbWVkaWEgb25seSBzY3JlZW4gYW5kIChtYXgtd2lkdGg6IDc4MXB4KSB7ICAgIH0gQG1lZGlhIG9ubHkgc2NyZWVuIGFuZCAobWF4LXdpZHRoOiA1OTlweCkgeyAgICB9IA==
Zack Metcalfe
W2RhdGEtdG9vbHNldC1ibG9ja3MtaW1hZ2U9ImFjZGQ4ODc1NDU3NjM5YTllMTlmNWVjYWFlYmM3MmQ0Il0geyBtYXgtd2lkdGg6IDEwMCU7IH0gIFtkYXRhLXRvb2xzZXQtYmxvY2tzLWltYWdlPSIzMmYxMDc2ODUyZWZmZWU1ZGZjMzQ1N2VmZWM1MjEzYiJdIHsgbWF4LXdpZHRoOiAxMDAlOyB9ICBAbWVkaWEgb25seSBzY3JlZW4gYW5kIChtYXgtd2lkdGg6IDc4MXB4KSB7ICAgIH0gQG1lZGlhIG9ubHkgc2NyZWVuIGFuZCAobWF4LXdpZHRoOiA1OTlweCkgeyAgICB9IA==
Zack Metcalfe is a freelance journalist, columnist and author based in the Maritimes.