In 1971, when Alternatives Journal (A\J) was launched, I was 8 years old. My world was known and comfortable to me and yet I was constantly growing. That growth, that natural evolution, did not come without its own impetus, nor did it come without aches and pains. Now, at 58, much has changed about me, both internally and externally, but I hope that I remain true to my 8 year-old self and the things that he established as foundational beliefs.

In 1971, when Alternatives Journal (A\J) was launched, the world of academic publishing with a specialization in environmental sciences was in its infancy. Dr. Robert Paehlke was a young, newly minted professor who was ably assisted by a team of students at Trent University. They generally had no idea how to publish an environmental magazine but they learned. And every iteration of Team A\J has learned in the intervening years to adapt to the changing needs of our audience, readers who took the information and stories presented in our print publication and put it to use in their studies and or at work as they began careers of their own. Now, at 50, much has changed about A\J, both on paper and in spirit, but I hope that whatever is published under the A\J banner (regardless of media type) remains true to the initial founding principles established by Dr. Paehlke and his team.

(with apologies to Alphonse Karr)

I mention this now because our organization is undergoing, as I type, another ‘growth spurt’, with equal parts prodding and pulling being the root drivers of this change. Prodding because our initial business model of ‘print publishing’ has been challenged for some time due to market and sustainability forces – and the recent supply chain challenges in the pulp and paper sector (diverted to make PPE, masks, etc.) has literally created a national case of publishers’ writers block. In the case of A\J, we completed three full print magazine issues and one celebratory issue (in honour of our 50th) within the 2021 calendar year but cannot find a printer with the stock available to support small-run publishers like A\J who cannot pre-buy their paper stock to take advantage of economies of scale (or even just to hoard). We are hopeful that this particular concern will eventually recede with the pandemic, but it forced a decision upon the Board about the best way to ensure that we continue to deliver vitally needed environmental journalism and storytelling.

In truth, the Board has been cognizant of the fact that evolutionary times were upon us since we stepped in during an emergency in 2019. We published a full array of print magazine issues in 2020 with the help of a team of young students, grads and volunteers. But we also focused our collective efforts on the development of the digital assets of the organization, testing out new concepts while dedicating efforts to expand our digital reach at a time of massive and inevitable change vis-a-vis media consumption patterns. And, as previously mentioned, we produced (but can’t print) four full print magazine issues in 2021. While all that work was going on, there was also a very dedicated effort to expand our digital journalism and story-telling efforts via alternativesjournal.ca, with hundreds of articles and posts being written each year, consumed, shared and used by hundreds of thousands of environmental readers.

As the calendar flipped to 2022, the Board of Directors of Alternatives Inc. were staring at a fundamental challenge to our continuing operations, or so we thought at our core. I can speak, as one of the Board members, as to our thought processes and discussions. And I can also share with you the harbingers of opportunity that presented themselves during this period of deliberation and contemplation. For it was true: due to the shortage of print-grade paper, the print operations of Alternatives Journal were imperiled – and would continue to be for an uncertain amount of time. We had been grinding away for fifty years as a print publication, and grafting digital capabilities as we could in more recent years. But the challenges, the grind, of the print publication (and its industry), continued to become more, well, challenging. Expenses went up, revenues went down. The Law of Diminishing Returns has been at play for some time – and the pandemic simply enhanced its impacts.

A\J has been a quarterly, then a bi-monthly (6x per year), then back to a quarterly. It has remained true to the idea that each issue should be thematically related and relevant. And prescient. And cohesive and organized and curated to maximize the overarching takeaway that the editorial team established when first spitballing potential issue themes. There is a merit to that format, today as much as yesterday. A format of informed opinions informing the opinions of opinion-makers. And informed by a youthful zeitgeist that is rebellious and reverential all at the same time, undergrads and grad students egged on by young professors with dreams of a better way. When the status quo isn’t working, look for alternatives. In 1971, the only format available was print. Today, if that status quo isn’t working – and the machine of print has literally ground to a halt due to a lack of paper – then we must look for alternatives. Luckily, in our case, the alternative was readily at hand with www.alternativesjournal.ca.

In the past few months, as the Board came to grips with the realities facing our print operations and watched with admiration the achievements of our digital team, the majority of our collective efforts have been dedicated to executing a new paradigm of operations, digital-first with healthy sprinklings of print publications when conditions warrants (and our appetites are suitably whetted to do so). Alex Goddard has outlined this shift, as well he should as the newly-minted Editor, Digital Media for our team. He first worked with A\J as he was completing his MES at Western University – and he’s kept his hands in the works since then, primarily on the digital side but also dabbling on our print work (which comes in handy, as we’ll all see today).

And, in the interim, team A\J collaborated with Nature Canada on a special project supporting the 2022 Pimlott Awards and its worthy recipients, Margaret Atwood and the late Graeme Gibson. In that project, A\J’s own Siobhan Mullally contributed a piece called IN MY LIFE. Reflecting on the sustained, bird-like love and partnership of Margaret Atwood and Graeme Gibson. Siobhan’s story was well written (and appropriately released on Valentine’s Day), which made it very special, but you can imagine our surprise and pride when Ms. Atwood noticed: 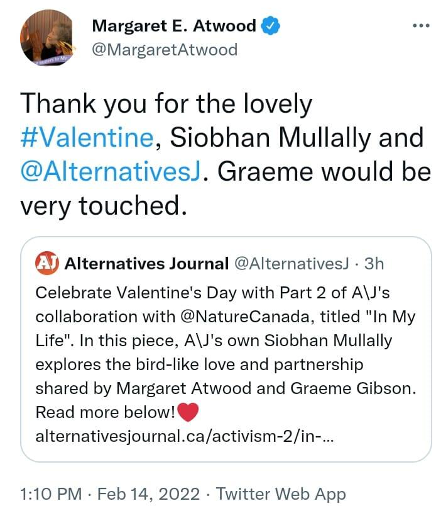 This would be the same Siobhan Mullally who had her first blog post, written for us in January 2021, reprinted in-toto in a massive communications textbook hitting campuses around the world in the fall of 2022.

These harbingers of opportunity made the Board’s decision that much easier. As one door or channel closed or came close to closing, another was opening opportunities farther and wider than we could have ever imagined. This organization was founded in 1971 to the ideals of expanding environmental literacy and education, to enhancing environmental journalism, and, in doing so, provide vitally-needed communications capacity. Those founding ideals are just as pertinent, relevant and needed today as they were then. And while the young students and professors of 1971 have retired and stepped back, their places have been taken by equally-bright young people ready to make important contributions to our world – and important changes to how we work together to build a better world. Today. And tomorrow.

(“Changes” is a song by English singer-songwriter David Bowie, originally released on his 1971 album Hunky Dory)