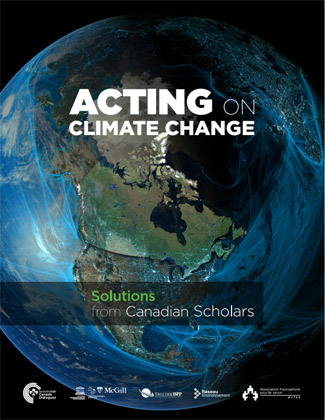 More than 60 scholars from across Canada collaborated with Sustainable Canada Dialogues to formulate viable, science-based policy options to guide Canada toward sustainability.

More than 60 scholars from across Canada collaborated with Sustainable Canada Dialogues to formulate viable, science-based policy options to guide Canada toward sustainability.

This article is an excerpt from Acting on Climate Change: Solutions by Canadian Scholars, the result of that collaboration. You can download your copy of the full position paper below.

We also invite you to leave comments on the ten policy directions listed in the report on this page.

Advancing the transition to a low-carbon society over coming decades will require a variety of policy initiatives at different levels of government. However, there is broad agreement that a critical first step is pricing carbon. Policies designed to address climate change and reduce greenhouse gas emissions (GHGs) should be:

Environmentally effective – they should be able to meet GHG reduction targets without causing other excessive environmental impacts;

Cost effective – they should achieve the necessary reduction at the least possible cost;

Administratively feasible – their complexity should not be beyond the governance capacities of implementing jurisdictions;

Equitable – they should not place unjustified burdens on any region, sector or income group; and

Politically feasible – they should be acceptable to the public and the elected leaders that represent them.

These climate policies should rest on the “polluter pays principle.” Canadians are used to this principle: taxes on cigarettes are justified, in part, by generating the income necessary to cover their health-related costs. In addition, meaningful climate mitigation policies require bringing together three elements: first, an objective in terms of targets and timelines for GHG reductions; second, a choice of policy instruments (subsidies or tax incentives, regulation, carbon tax or cap and trade, research and development); third, the design of those policy instruments to achieve the objective.

Because energy, transport and building infrastructures lasts for several decades and lock in development along specific pathways, we believe that the long-term target of 80% emissions reduction by the middle of the century recommended by the IPCC for developed states should be adopted as soon as possible to inform current decision making. Failure to do so will lock Canada into a high-carbon pathway. We also propose adopting a medium-term target for 2025 that would raise the ambition of Canada’s emissions reduction effort in the short term. To maintain past consistency with US objectives, Canada could adopt the recently announced US target of 26-28% below 2005 levels by 2025. The following section discusses advantages and disadvantages of key policy instruments and associated design necessary, in the minds of Sustainable Canada Dialogues (SCD) scholars, to allow Canada to meet these targets.

The scholars of SCD unanimously recommend putting a price on carbon as an essential component of a Climate Action Plan.

There are challenging trade-offs among policy options, leaving no perfect mechanism for reducing GHG emissions that fully meets all criteria. Regulations can be effective, and are more politically palatable to some, but they are demonstrably less cost-effective than a carbon tax or cap and trade. It would be a tremendous administrative challenge to regulate the many nonindustrial sources of GHG emissions that collectively account for a significant share of Canada’s emissions. Canada’s circumstances mean these criteria have significant design implications. There is widespread agreement among climate policy analysts that carbon pricing should be a key component of any comprehensive climate change policy, but there is less agreement on which carbon-pricing mechanism – a carbon tax or cap and trade – provides the best balance of these criteria.

Carbon taxes have been the preferred instrument for economists for decades because of their cost-effectiveness and administrative simplicity. British Columbia implemented an effective model of a revenue-neutral carbon tax in 2008 that is receiving increasing recognition around the world. In the contemporary political climate, however, carbon taxes come with special political baggage.

Cap and trade, if it is designed effectively, can be virtually as cost-effective as a carbon tax, although its great administrative complexity likely makes it somewhat more costly than a tax. The basic feature of a cap and trade system is that the government establishes an absolute cap on GHG emissions that is designed to decline over time, allowing it to meet a GHG reduction objective. The government issues allowances, or permits, to emitters who can trade the allowances in a regulated market. This approach has the advantage of directly controlling the quantity of emissions, providing greater certainty and accountability, both domestically and internationally, that emission targets will be met. However, it poses special administrative challenges because the market in permits will need to be effectively regulated to avoid manipulation. A cap and trade system has been in place in the European Union for eight years, and is in operation in California and Québec.

Persistent concerns about regional equity suggest that to be politically feasible, a climate policy framework should not result in significant regional redistribution. Moreover, the relatively decentralized nature of Canada’s federation raises questions about the desirability of a national approach, or a differentiated province-led approach like the one we have now. From a cost-effectiveness perspective, there are significant advantages to a national approach. There would be concerns about fairness and competitiveness if emitters in one province faced a significantly different carbon price than emitters elsewhere in Canada. And a cap and trade system would benefit economically from being applied to a larger and more diverse area. Moreover, a national approach would avoid the challenging question about how to allocate emission reduction targets to provinces, because in either the carbon tax approach or a cap and trade system provincial emission levels would be responses to market signals, not established in advance. But a national approach would be politically challenging, especially given the diverse policy instruments currently in use by different provinces and the political sensitivities within the federation.

Option A: A national revenue-neutral carbon tax could be built on the British Columbia model. BC’s current tax is $30 per tonne of carbon dioxide on all fuel use. That amount would need to be increased over time for Canada to meet its emission reduction targets. One approach would be to link the tax to estimates of the social cost of carbon, currently at $40 per tonne, and estimated to increase annually by $1 per tonne. Modelling and monitoring would be required to estimate whether that rate of increase would be sufficient to meet Canada’s target.

To improve equity, carbon tax revenues could be distributed back to the province of origin, and adjustments to the tax system could be made, as they have been in British Columbia, to ensure the carbon tax does not disadvantage low-income groups. Any national system would require provinces with different policy instruments in place to adapt. If Quebec wanted to keep its cap and trade system, for example, it would need to negotiate an equivalency agreement that either ensures that its carbon price levels were similar to those in the rest of the country or that it complied with a province-specific emission cap.

Option B: If there is a preference for cap and trade, we recommend modelling the national framework on the basic design of the Québec system, with some important exceptions to smooth the transition. There are significant advantages to building on an existing system. In particular the Québec system is linked to the much larger California system, thus reducing some of the risks of administrative complexity.

What sources are covered? Our proposal would cover industrial and utility emissions and fuel distributors.

Are allowances auctioned or issued for free (“grandparenting”)? Our proposal would begin by providing free allowances but then increase the fraction of allowances auctioned over time. While this approach would slow the flow of new revenues to governments, it would ease the transition to the new climate policy and allow emitters time to adjust.

Are prices regulated with price floors, caps or both? Our proposal would establish a price floor (currently $12.08 per tonne in Québec) that would increase over time, and a mechanism to minimize permit-price volatility.

How are actions linked with other jurisdictions? There are some important tensions between different policy instruments, so introducing a national cap and trade program will pose some challenges for provinces like British Columbia and Alberta that have pursued alternative instruments. There would be considerable benefits in cost-effectiveness for having a national system. But provisions could be made for equivalency agreements if provinces wanted an option to continue relying on their existing policy instruments. However, it would be important to develop a legally-binding, province-specific reduction target in that case.

How should revenues be allocated from auctions? To address regional equity concerns, as auction revenues increase, they could be returned to the province of origin, and that province of origin could decide how to use those revenues. To address the differential impact of implementing the system on different income groups, income taxes could be adjusted accordingly.

Should offsets be allowed from non-regulated emitters? Offsets can increase flexibility and reduce compliance costs, but need to be carefully regulated to ensure their legitimacy. We recommend following the practice of California, Québec and the EU, and allow well-regulated offsets but limit them to a maximum of 8% of emitters’ compliance obligations.

A carbon-pricing mechanism is an essential first step, but more will be required from governments at all levels over coming decades to accelerate the transition to a low-carbon society. Increased funding for research, development and deployment of low-carbon technologies, stronger regulatory standards, measures to encourage citizen initiatives and public education are all important. By strengthening green and low-carbon innovation we can address the challenge of climate change and open up increased opportunities for prosperity and sustainable development.

This article was excerpted from Acting on Climate Change: Solutions by Canadian Scholars, Catherine Potvin et al., a position paper by the UNESCO-McGill Chair for Dialogues on Sustainability (March 2015).

James Meadowcroft is a professor in both the School of Public Policy and Administration and the Department of Political Science at Carleton University.

George Hoberg is a professor of environmental and natural resource policy in the Faculty of Forestry at UBC. He seeks to help Canada play a constructive role in addressing global warming.