In Agbogbloshie, e-waste is gold. Literally. Precious metals removed from circuit boards become a source of income for many in the informal recycling trade. But the methods used to extract these valuable materials – including open-pit burning and acid baths – are crude. Workers are exposed to a toxic mix of heavy metals, brominated flameretardants and a particularly carcinogenic class of chemicals called polycyclic aromatic hydrocarbons. Many e-waste collectors suffer a range of health effects from injuries to premature death, while nearby communities face serious chronic disease and longterm environmental degradation.

This isn’t news – it’s a story that has been told for well over a decade in this country. But fortunately the problem hasn’t gone unchecked, and Canada’s e-waste handling has come a long way in recent years. Statistics Canada reported a 60 per cent increase in e-waste recycling between 2008 and 2010, and industry groups report a nearly three-fold increase since then. This upsurge is due in large part to the proliferation of stewardship programs and drop-off location options across the country.

Under the management of Electronics Product Stewardship Canada (EPSC), a non-profit, industryled organization, stewardship programs have been established in every province except New Brunswick (but none of the three territories – yet). Consumers pay the stewardship program provider a proportionate environmental handling fee to cover the costs of recycling electronics safely here in Canada. Together these programs have collected and responsibly recycled more than 360,000 tonnes of e-waste since 2006.

Still, much of our discarded electronics falls through the cracks. Despite recycling more than 121,000 tonnes of electronic waste last year (an average of 5.1 kilograms per capita), provincial stewardship programs recovered slightly less than 15 per cent of the total e-waste produced (estimated at 860,000 tonnes, or 24.72 kg per capita). Why the low recovery rate? While a recent survey conducted in Ontario indicated most respondents (88 per cent) were aware they should recycle their electronics, the most prominent barriers were reported to be a lack of information on proper disposal, inconvenience and a scarcity of drop-off locations.

Electronic devices that aren’t recycled through provincial stewardship programs often sit on shelves or in storage, or they’re thrown out and end up in a landfill. Yet much of this e-waste finds its way overseas through recyclers that don’t participate in EPSC-sanctioned programs. While the Basel Convention makes it illegal for party nations such as Canada to ship e-waste to developing countries, a loophole in the convention permits export for the purpose of reuse, allowing shady recyclers to legally dump electronics under false pretenses. And as with many such regulations, enforcement is a challenge.

Some progress has been made toward reducing the global impact of e-waste. However, our increasing consumption and the potential biophysical and socioeconomic impact of disposing of even more electronics threatens environmental and human health both in Canada and abroad. To be good stewards of our collective future, it is critical that we take personal responsibility for our e-waste and work to develop responsible recycling economies.

Here’s to keep your e-waste from ending up in a place like Agbogbloshie:

Get with the program
Bring e-waste to a product stewardship program dropoff location with guidance from recyclemyelectronics.ca, or Call2Recycle.ca, which specializes in used batteries and cellphones. Avoid collection or donation programs that lack a strong local reputation or third-party auditing processes.

Make it last
Eliminate unnecessary electronics purchases and invest in high-quality products that won’t need replacing in a year. This reduces the production of e-waste and helps to lessen mining pressures on natural resources such as rare earth metals, which are a growing source of conflict in developing nations. Hold on to your phone for another year, or breathe new life into an old computer with a lightning-fast solid-state hard drive.

Give strategic support
Vote with your dollars and support companies that are progressive about removing harmful materials like lead, mercury, cadmium and brominated flame-retardants, and avoid manufacturers that are not progressive. Check out Greenpeace’s Guide to Greener Electronics or GoodGuide to compare options.

Demand open data
While provincial stewardship programs take stock of the e-waste they recycle, up-to-date statistics on Canada’s total e-waste generation and diversion, as well as volumes shipped overseas, are difficult to come by. Advocate for a nationwide audit of e-waste production and where it goes, and demand that industry and government disclose available information.

Write your local MP
Tell the Canadian government to support tighter regulations that will prevent the dumping of e-waste on developing countries. 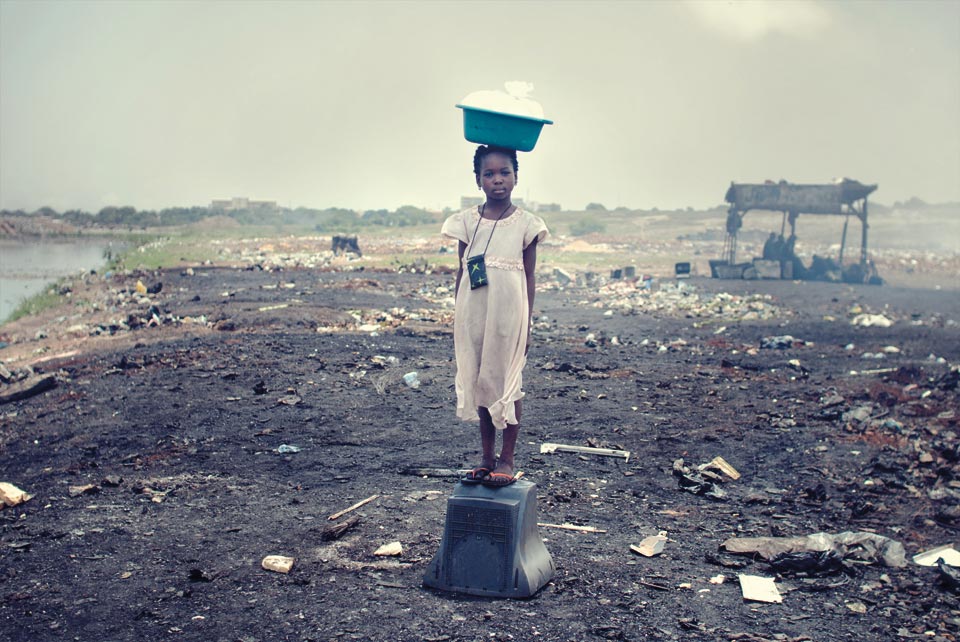 Adjoa, age nine, sells small water bags to the boys. They drink it and also use it to extinguish fires. 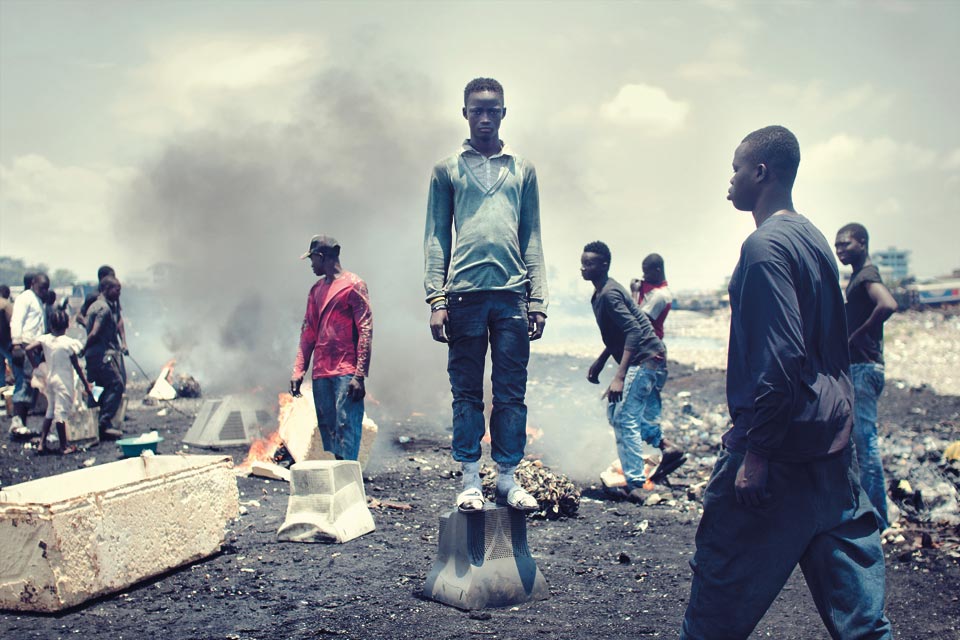 Rahman Dauda, 12, started working in Agbogbloshie three years ago. He burns e-waste with a few friends. “Whenever possible I go to school,” he says. 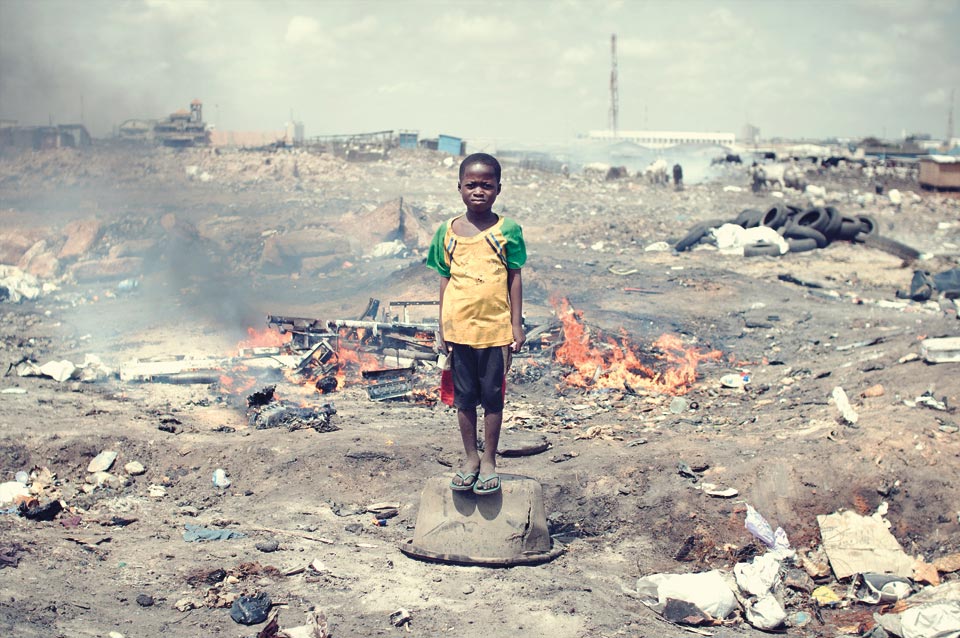 Agbogbloshie is a playground for Kwabena Labobe, 10. His parents are not able to send him to school and forbid him to burn e-waste. 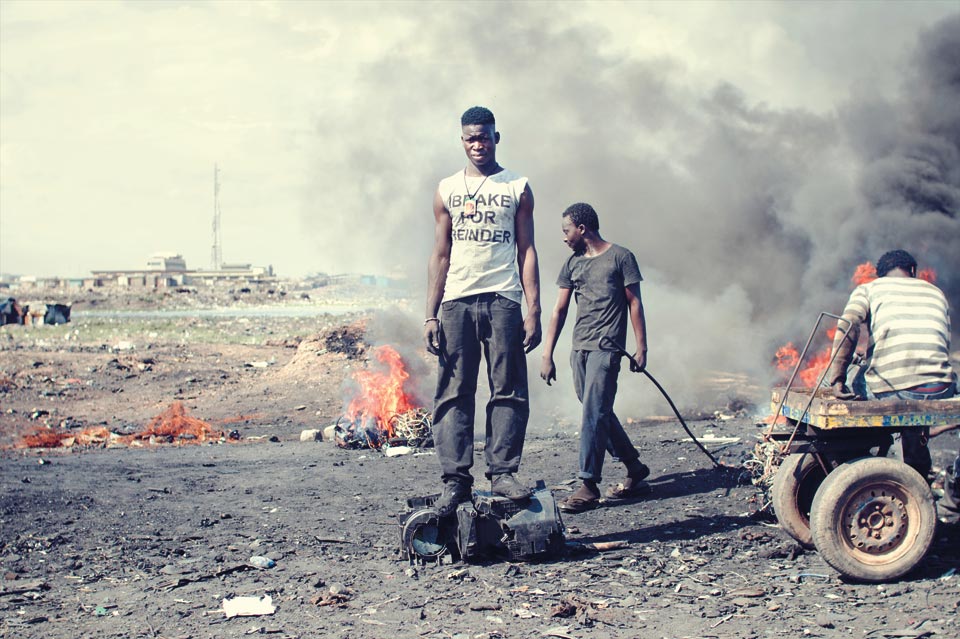 Ibrahim Abdulai, 23, is a “chief.” Nobody works for him, but he is able to decide who is and is not allowed to burn fires in this particular area. 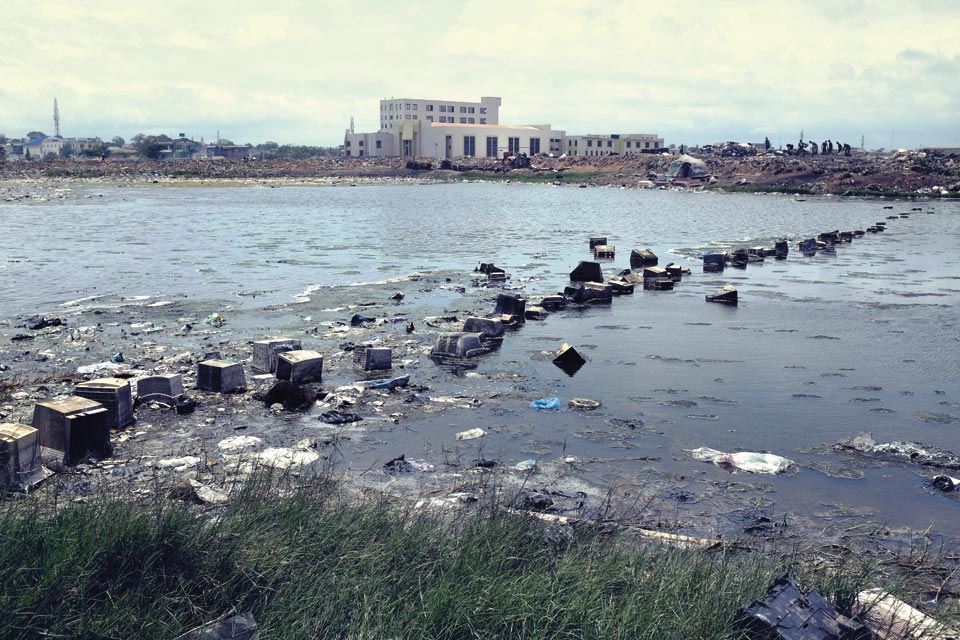 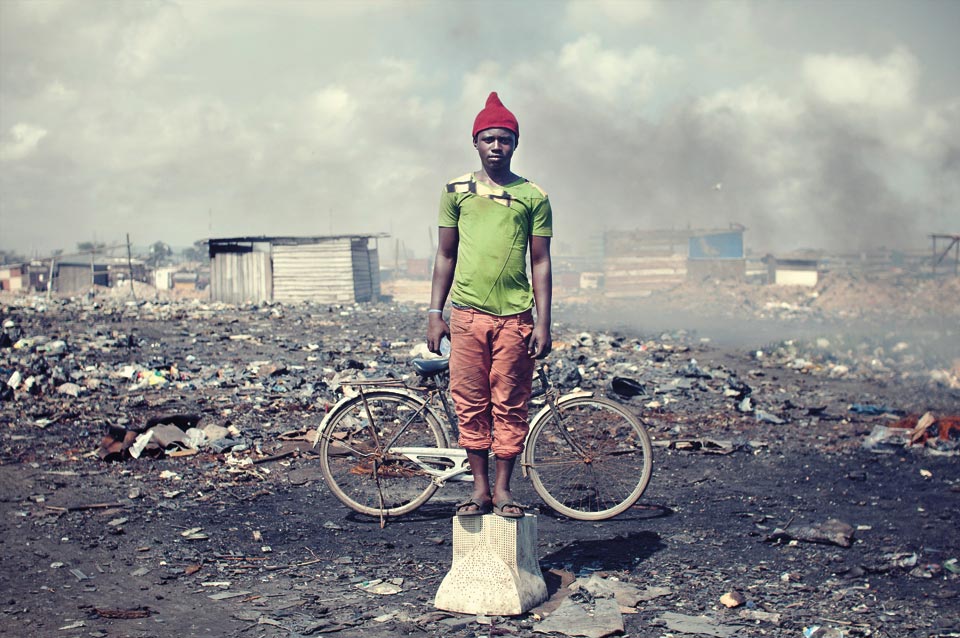 Adam Latif, 21. The ages of Agbogbloshie’s inhabitants are often only estimates, as many do not know the date of their birth. 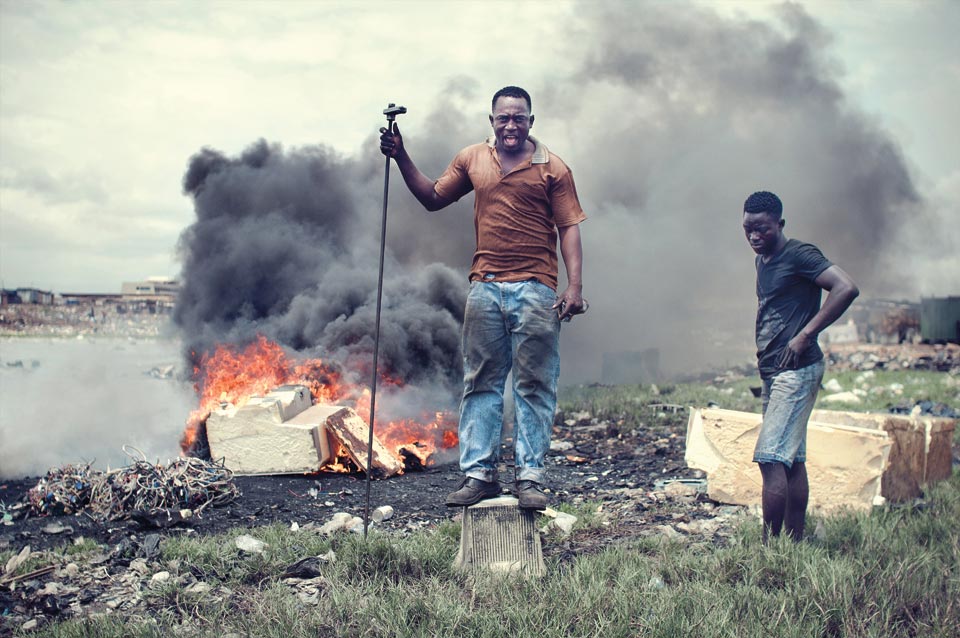 Adam Nasara, 25, uses Styropor, an insulating material from refrigerators, to light a fire. 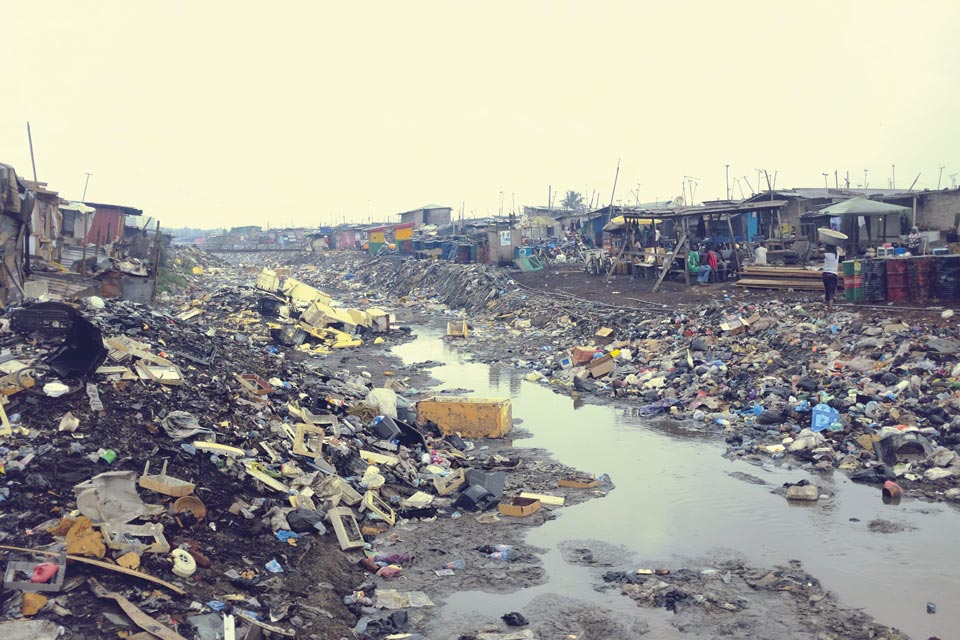 The Odaw River separates Agbogbloshie from Galaway, where people live, trade and work.