If you electrify everything and produce electricity from wind, water, and solar, your power demand goes down 42.5 percent. Most of that is due to the fact that electricity is more efficient than combustion. If I drive a car, the plug-to-wheel efficiency of an electric car is about 80 to 86 percent. In other words, 80 to 86 percent of the electricity going into the car goes to move the car and the rest is waste heat.

If you electrify everything and produce electricity from wind, water, and solar, your power demand goes down 42.5 percent. Most of that is due to the fact that electricity is more efficient than combustion. If I drive a car, the plug-to-wheel efficiency of an electric car is about 80 to 86 percent. In other words, 80 to 86 percent of the electricity going into the car goes to move the car and the rest is waste heat. In a gasoline car, only 17 to 20 percent of the energy in the gasoline goes to move the car, the rest is waste heat. So, by going to an electric car, you reduce power demand for cars by a factor of four to five. But if you average over all sectors there’s a 23 percent reduction of power demand due to electrification. Then you save around 13 percent of all energy due to the fact that 13 percent of all energy worldwide is used to mine, transport, and refine fossil fuels and uranium, and you eliminate all that energy requirement. So that’s 13 more percent. And then we think we can squeeze another seven percent out from end-use energy efficiency improvements beyond business as usual. So we can reduce power demand 42.5 percent by electrifying.” – Mark Jacobson in a recent lecture at the University of British Columbia

Since James Watt invented the steam engine in 1781, we have understood the power of fossil fuels. The industrial revolution was powered by coal. In the 20th century we tapped into the power of oil to revolutionize transportation and agriculture. Today coal, oil and natural gas supply 81 percent of the world’s energy needs. If we are to address the growing threat of climate change, we need to transition away from these fossil fuels. One pathway to making this transition is summarized by Vox writer David Roberts: “1. Clean up electricity, 2. Electricity everything.”

Electricity can be used to power everything from transportation to steelmaking. If we can clean up electricity, then we can work to electrify everything and eliminate greenhouse gas emissions from our energy system. In a recent research paper (see link at end) Nicholas Rivers and I identified how Canada can reduce greenhouse gas emissions in the electricity sector at the lowest cost. To motivate emissions reductions, we include carbon pricing in our economic model. Cost matters and if we make pollution more expensive, electricity system planners will find ways to reduce pollution.

As we increase the price of carbon in our model, we find that the optimal electricity mix changes. With a carbon price of $80/tonne, most of Canada’s coal plants would no longer be economical. The model suggests they should be retired and replaced by natural gas power plants and wind turbines.

At higher carbon prices, our model recommends replacing natural gas generation with more wind power. For example, at a carbon price of $200/tonne, the model recommends that wind power provide 30 percent of Canada’s electricity supply. This is a significant scaling up from the current two percent of supply, but recent research by the Canadian Wind Energy Association (CANWEA) and General Electric has shown that wind can provide 35 percent of electricity demand in Canada without encountering technical barriers. 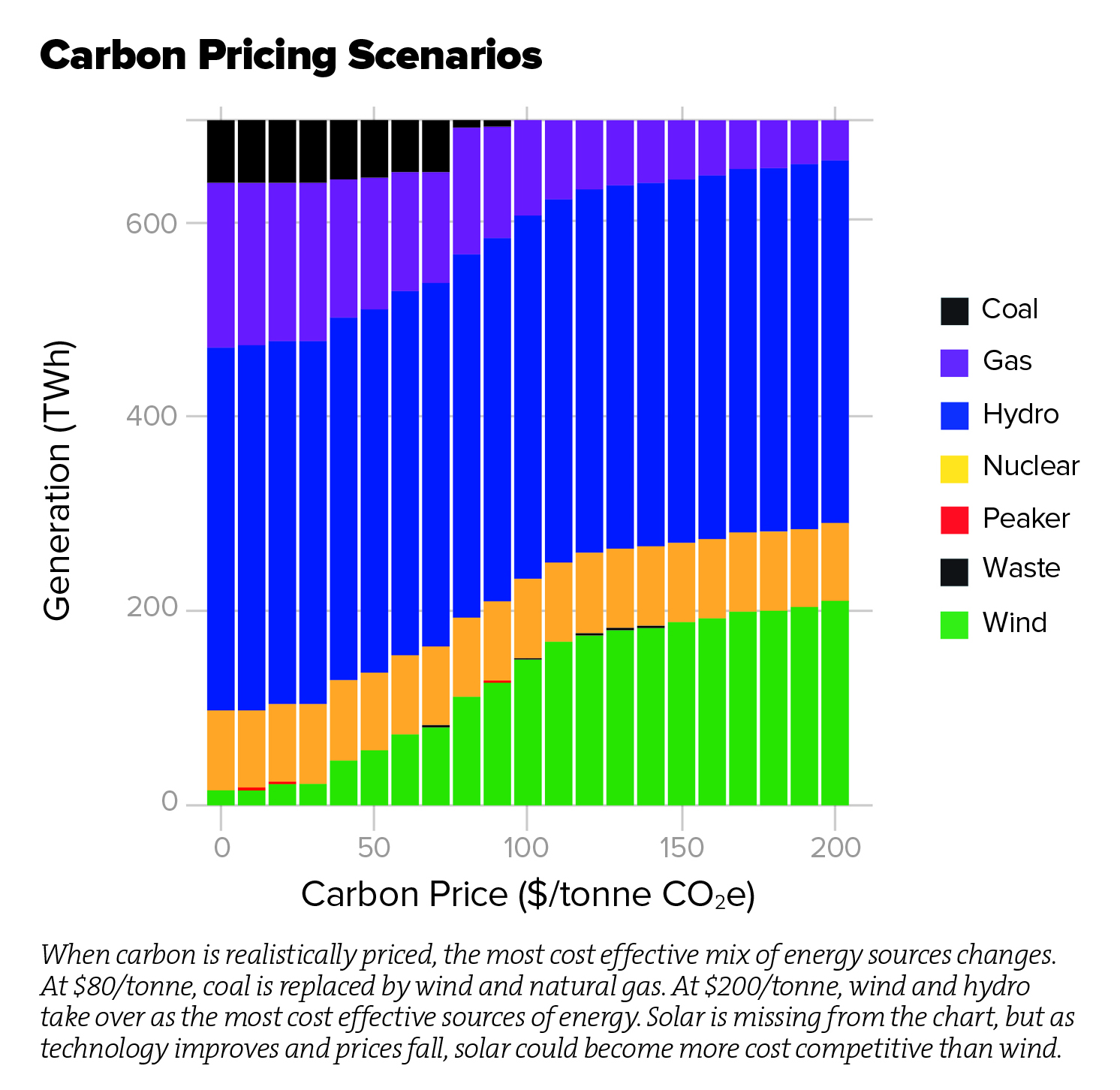 The exact mix of power sources that can clean up Canada’s electricity sector may change over time as the cost of technologies change. For example, if solar continues to fall in price, it may become more cost-competitive than wind. Carbon pricing can continue to drive electricity planning decisions towards the options that give us emissions-free electricity at the
lowest price.

If we then move to electrify everything we can reduce our country’s appetite for energy. Mark Jacobson and his team have argued that we can meet all of our energy needs, for all purposes, using wind, water and solar power by 2050. In his scenarios, renewable energy would increase from 1.4 percent of the world’s energy supply to 100 percent in 33 years. As Jacobson said at the beginning of the article, electrification can reduce energy demand by 40 percent because “electricity is more efficient than combustion.”

Technologies exist today to allow for the complete electrification of personal transportation. Auto manufacturers like Tesla specialize in battery-electric vehicles, while others like Nissan, Ford, Chevrolet and Volkswagen are moving to introduce fully electric models. Consumer uptake of these vehicles can be encouraged by well-structured climate policy, such as Quebec’s zero-emissions vehicle regulations.

Freight transportation is a more difficult sector to electrify, but technologies such as hydrogen fuel cells with hydrogen produced by zero-emissions electricity or biofuels could play a role.

That sector alone is responsible for about nine percent of global emissions and so innovation is needed to find alternatives.

Globally, Jacobson’s models predict that electrifying everything could keep total energy demand roughly constant until 2050. In Canada, his team finds that energy demand would actually decline from current levels as global demand for fossil fuels dries up and Canada’s oil, gas and coal sectors are phased out.

Canada’s challenge will be to advance the low-carbon energy transition while ensuring that Canadian workers and companies affected by a fossil fuel phaseout play a role in cleaning up electricity while electrifying everything.” 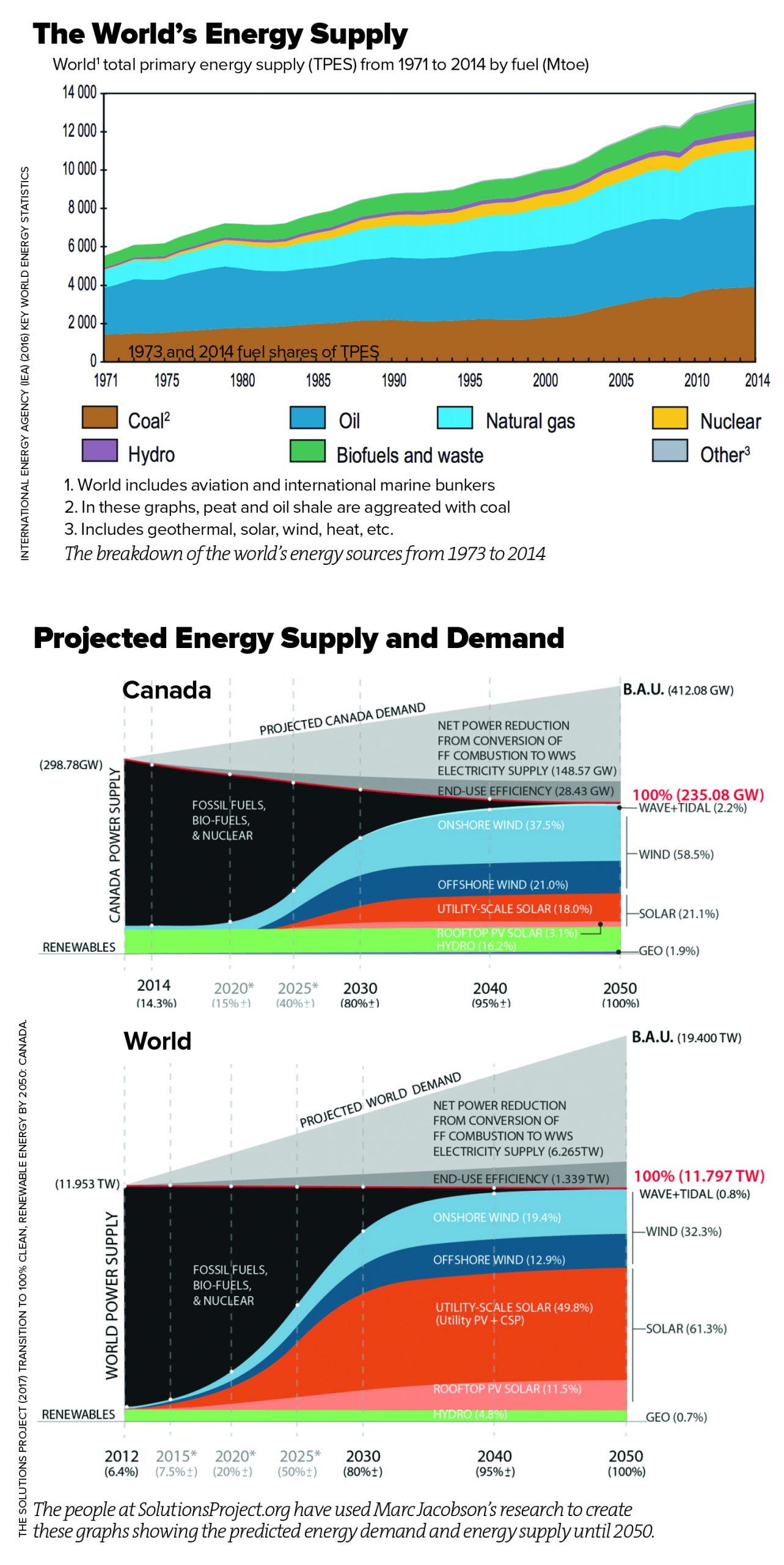 There is a cost to be paid to make this transition. Rivers and I find that decarbonizing the Canadian electricity sector completely by 2025 would cost an additional $12 billion per year.

But, the benefits would be substantial. Electricity sector greenhouse gas emissions would be reduced to zero. Pollutants such as mercury, sulphur dioxide and particulate matter would be eliminated, improving air quality and human health. Water would no longer be used in the boilers of coal and natural gas plants. And the stage would be set to electrify everything and reduce emissions in other sectors.

The transition will create hardship for some Canadians. Fossil fuel extraction is a big part of the Canadian economy, comprising between 11 to 16 percent of exports in recent years. As Bank of Canada Deputy Governor Timothy Lane recently noted, the shift to a low-carbon economy will be a structural shift for Canada. Canada’s challenge will be to advance the low-carbon energy transition while ensuring that Canadian workers and companies affected by a fossil fuel phaseout play a role in cleaning up electricity while electrifying everything. This means the coming transition will be not only an energy transition, but an economic and social transition for Canadians. It’s time for a national conversation on how best to achieve this transition.

Brett Dolter is an ecological economist specializing in climate and energy policy research. He is the vice president of Research and Education for the Canadian Society for Ecological Economics and is a postdoctoral research fellow at the University of Ottawa’s Institute of Environment.