AT 16 METRES or more – about five storeys high – the Bay of Fundy’s tides are the highest in the world. Each day along Fundy’s 1,200-kilometre coastline, the tides cover and then expose stony, red-sand beaches and some 3,000 hectares of biologically important mud flats. In the upper bay, the incoming water creates a tidal bore: a low, moving wave that goes upstream against the current in tidal rivers – and is fun to ride in a kayak or raft! Further down the bay you can see the famous Reversing Falls in Saint John, NB.

AT 16 METRES or more – about five storeys high – the Bay of Fundy’s tides are the highest in the world. Each day along Fundy’s 1,200-kilometre coastline, the tides cover and then expose stony, red-sand beaches and some 3,000 hectares of biologically important mud flats. In the upper bay, the incoming water creates a tidal bore: a low, moving wave that goes upstream against the current in tidal rivers – and is fun to ride in a kayak or raft! Further down the bay you can see the famous Reversing Falls in Saint John, NB. Here, the Saint John River pours down through a rocky gorge at low tide and swirls back upstream over the same rocks with the rising tide.

At each tide, 160 billion tonnes of water are moved in and out of the entire bay, four times the combined flow of all the freshwater of the planet’s rivers. Fundy’s size and contours resonate almost perfectly with tidal periodicity to slosh all this water to exceptional heights. And where rocks or local topography form narrow passages in the bay, the tremendous volume of moving water results in powerful, sometimes dangerous, tide rips – in some places as fast as 10 knots (five metres per second).

For an engineer, it probably would not go unremarked that this awesome natural phenomenon could potentially be harnessed as a source of energy. Moreover, that energy would be renewable and essentially pollution free, and unlike solar and wind, the availability of tidal energy is easily and accurately predicted. It isn’t surprising that for the last few decades there have been serious but sporadic efforts to make tidal power a reality on Canada’s East Coast. With the implications of climate change growing ever more ominous, the Province of Nova Scotia is reinvigorating tidal power research with a view to expanding its practical applications, as are a number of other countries, companies and institutions.

Nova Scotia is already home to North America’s first and only tidal power station – 2014 marks the 30th anniversary of the start of operations at Nova Scotia Power’s Annapolis Tidal Power Plant. The 20-megawatt (MW) facility produces some 30 million kilowatt-hours (kWh) of electricity per year, enough to power more than 4,000 homes. This is quite small in scale, considering the theoretical 2,500 MW that could be harvested from the full power of Fundy’s tides.

All human activities have some environmental consequences, and even the modest-sized Annapolis power station has had local impacts. The plant employs the Annapolis River’s tidal basin as a head pond, using a barrage to hold back the flood tide waters. Set in the barrage are gates through which the tide comes in. As the tide recedes, the water is released and directed through a massive straight-flow turbine, producing electricity for five hours during the outgoing tide. The main environmental effects of this are the impacts of scouring and silt deposition on natural flow and water levels, as well as occasional incidents involving marine life. 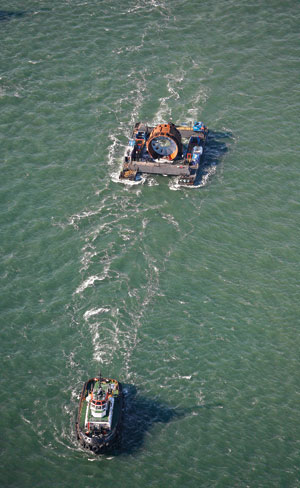 Consequently, rather than concentrating on scaled-up barrage technology with its anticipated environmental impacts, researchers have spent the last decade focused on developing arrays of underwater turbines to tap fast-flowing tidal currents. But the Bay of Fundy is not easily tamed. Several experimental turbine designs, such as Nova Scotia Power’s OPENHydro device, have failed, sometimes within weeks, ripped apart by the speed and power of the tides.After the Annapolis plant began operations and experience with the barrage technology grew, environmental concerns about the possibility of similar but much larger Fundy tidal facilities also increased. Issues included the potential for major silting and scouring, the prospect of reduced salinity in the basin, as well as effects on fish migration and other sea life. Many ecologists were especially worried about the barrage flooding of Fundy’s extensive tidal mud flats, which are the critical stopover feeding grounds for millions of shorebirds during migration.

Nevertheless, the advantages of this technological approach are clear, and the promise of a local and renewable energy source – free of carbon emissions – continues to inspire interest. Considerable research and development time is needed for this turbine technology, not least to bring costs in line with other renewables. Committed activity is a prerequisite for that to happen, and Nova Scotia’s 2012 Tidal Energy Strategy foresees 15 to 20 MW of additional capacity as an early objective, with an ultimate aim of up to 300 MW

In Europe, there are a number of countries and technology companies now working on tidal power in locations like Scotland, which has targets for 100-per-cent renewable electricity by 2020, and France, which has operated a 240-MW tidal power station at La Rance for many years.

FORCE is starting operations to rent three offshore berths in Minas Basin for observation and testing of large in-stream turbines, submarine cables and grid connections, as well as doing environmental monitoring. Projects that were awarded berths by the provincial government in March 2014 are from Black Rock, a Halifax company with a number of European partners, and OPENHydro – a collaboration involving OPENHydro’s French parent company DCNS, Nova Scotia Power’s parent company Emera, and various Irving enterprises. The third berth is already held by Minas Energy, which in March also announced a new partnership with Bluewater to create an advanced flotation system using Siemens turbines.In Nova Scotia, the renewed attention has led down two different paths. One response is the establishment of a major new test facility, the Fundy Ocean Research Centre for Energy (FORCE), funded by the Province, Ottawa, Encana Corporation and several tidal technology companies, with links to researchers at Acadia and other universities. Part of the rationale for such an important new facility is to be able to test technology against “The Fundy Standard” – if it works there, it can work anywhere.

The other approach in Nova Scotia is being led by Fundy Tidal Inc., a community-based company established on Brier Island in 2006 to undertake work on much smaller-scale projects to generate local power from tidal currents. Fundy Tidal’s focus is on community ownership and benefits, and it has recently been awarded three sites for Community Feed-In Tariff (COMFIT) projects. Nova Scotia’s COMFIT program currently mandates standard tariffs for electricity from approved, small-scale renewable energy sources using wind, run-of-the-river hydro and in-stream tidal technologies.

These projects must be community-based; eligible owners include municipalities, Mi’kmaw band councils, universities, co-ops, not-for-profit groups and community economic development organizations. The independent provincial Utility and Review Board (UARB) determines the tariff for the different COMFIT technologies, setting the rate for in-stream tidal projects at $0.652/kWh. These small tidal projects will be connected to their local distribution systems within the provincial electricity grid through an agreement with Nova Scotia Power.

In addition to these two approaches – large-scale and local – Nova Scotia has also been developing international connections in the field. These include a Memorandum of Understanding to share knowledge and best practices, and to facilitate student exchanges on tidal power research with the UK – in particular involving Dalhousie University and the Energy Systems Unit at the University of Strathclyde in Glasgow, which has a test facility in the Orkney Islands. Additionally, in November 2014, the first International Conference on Ocean Energy held in North America will take place in Nova Scotia. This small province is a logical location – it currently has more than 200 ocean technology firms, the largest concentration in North America. It thus may yet be that Fundy’s tides – once only a tourist spectacle – give rise to a form of renewable energy.

Susan Holtz has been a private consultant on energy and environmental policy and was based in Nova Scotia for much of her career. She was the founding Vice Chair of both the Nova Scotia and the now-disbanded National Round Table on the Environment and the Economy and has served on numerous other advisory bodies and panels, including the federal Auditor General’s Panel of Senior Advisors and the George’s Bank Environmental Review Panel. As well as energy and other topics related to resource and toxics management, her interests include the development of institutional capacity in areas such as sustainability reporting and assessment. Now retired, she currently lives in Prince Edward County, Ontario, where she is active in the grassroots County Sustainability Group. She has been involved with A/J in one way or another for decades.