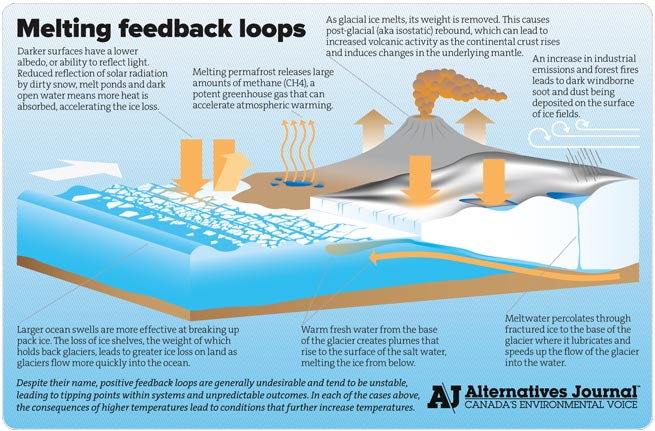 The month of May 2014 was packed with stark realizations about the state of our polar ice caps. The collapse of the West Antarctic ice sheet is unstoppable, according to a paper published by Geophysical Research Letters. The estimated time frame for its disappearance is two centuries – or possibly much faster. Combined with another study in Science, the latest information about glaciers and ice sheets concludes that we are losing ice faster than anticipated. Global sea levels will rise by three to four metres from the loss of the West Antarctic alone.

Approximately 100 million people globally live within less than a metre of current sea level. The rise from the West Antarctic will displace millions more. Additionally, NASA scientists recently discovered more than 100 ice-filled canyons under Greenland’s ocean-feeding glaciers. More ice means more melt than previously believed and this will cause an even greater rise in sea level.

Albedo is the technical term for the surface quality that reflects solar radiation. Snow and ice are highly reflective and have a high albedo. By contrast, dark surfaces like open water have low albedo and absorb solar rays, increasing temperature. Forest fires in North America and Siberia are increasing; the soot settles on the ice and snow in Greenland, darkening it and decreasing albedo. In 2012, 97 per cent of Greenland’s surface ice melted over a period of less than a week due to this phenomenon. As the number and intensity of forest fires continue to grow, this loss of albedo will happen more frequently and consistently.

Another paper published in May by Nature focused on the impact of waves greater than 3 metres in height on Antarctic ice volumes. Such waves are strong enough to push past the continent’s ring of ice floes, breaking up sea ice hundreds of kilometers inland from the frozen coastline. There is a strong correlation between wave height and the retreat and thinning of ice in Antarctica, yet these effects have not been taken into account in climate change models that predict a sea level rise of 1m by 2100.

Since 2007 the Arctic has lost more than 480,000 square kilometres of ice. As trapped methane is released, a positive feedback loop occurs – one change sparks another that reinforces the initial action. Increasing atmospheric temperatures are melting the ice and methane is being released. Methane increases the temperature, melting more ice. A commentary in Nature on July 25, 2013, speculated the cost of climate damage from the release of 50 gigatonnes of methane over the next decade at about US$60-trillion dollars worldwide – nearly equal to the value of the entire world economy in 2012.

Finally, new research published in July’s Earth and Planetary Science Letters shows that ice sheet melt is impacting the Earth’s crust. Recently uncovered ground in the Antarctic has uplifted so fast – five centimetres per year – that scientists are worried about movement in Earth’s mantle triggering the creation of volcanoes. In Alaska, melting glaciers have scientists on the watch for earthquakes as tectonic plates move in response to the shifting ice.