A FROZEN-GROUND BARRIER may sound more like a sci-fi set piece than a modern remediation technology. Unlike a wall above ground, ice walls — or ice dykes, curtains, ring-fences and cofferdams — exist below ground and are a separate entity from the surrounding soil and groundwater. Ground freezing is widely used to contain hazardous chemicals and mining byproducts, as well as to stabilize soil. While ice walls are often temporary, some frozen-ground propane storage pits have been operational for 40 years.

A FROZEN-GROUND BARRIER may sound more like a sci-fi set piece than a modern remediation technology. Unlike a wall above ground, ice walls — or ice dykes, curtains, ring-fences and cofferdams — exist below ground and are a separate entity from the surrounding soil and groundwater. Ground freezing is widely used to contain hazardous chemicals and mining byproducts, as well as to stabilize soil. While ice walls are often temporary, some frozen-ground propane storage pits have been operational for 40 years.

In the mid-1990s, the US government considered an ice wall to contain 6.4 trillion litres of radioactive and hazardous materials in Hanford, Washington. The solution was rejected because the ground would have had to remain frozen for possibly centuries. Beyond such funding or organizational limitations, especially on a massive scale, other problems with frozen ground containment can occur with unforeseen site anomalies and where groundwater flows too quickly.

The March 2011 Tohoku-Oki earthquake was the 5th most powerful ever recorded (9.0 magnitude). A 10-metre lift in the seafloor caused a tsunami that killed 18,000 people. The resulting level-seven meltdown at the Fukushima Daiichi power plant has resulted in 270 tonnes of radioactive water leaking from the site daily. The Japanese government is proposing to remediate the area with a massive, 1.4-kilometre-long and 27-metre-deep ice wall. The price tag to isolate the contaminated water is currently close to half a billion dollars, plus millions more to maintain. Cleanup and containment at Fukushima is expected to take 40 years.

Problem: The energy required to maintain the wall –about 9.8 megawatts of power, enough to supply more than 3,000 households – will come at a huge cost spread over several decades. Japan is also quake-prone and the design has to reflect that, including plenty of backup generation capability. Construction of the wall is expected to begin in 2014 and be completed in 2015. 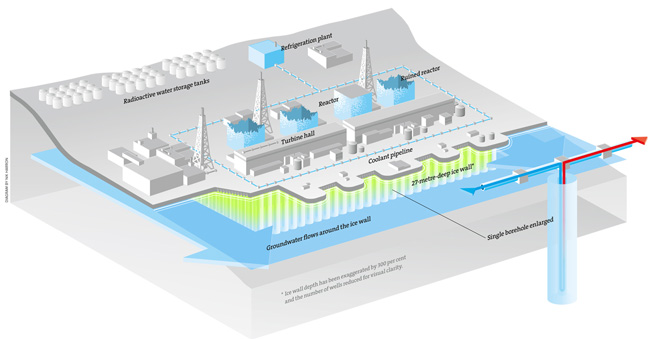 Vertical boreholes will be drilled around the perimeter of the area to be contained and filled with small-diameter, closed-end freeze pipes. A cooling agent, usually chilled brine, will be circulated through the pipes. As the heat is absorbed from the ground into the brine and carried away, the earth will freeze in cylindrical pillars, which will merge to form an impermeable ice wall. As the brine is repeatedly cooled in the refrigeration plant and recirculated, the continued heat extraction will gradually increase the thickness of the frozen wall.

An ice wall was constructed in 1998 to protect this proposed open-pit mine from inundation by groundwater. The freeze wall is 3.66 kilometres long, consisting of 2,240 wells for freezing rods that are 45 to 125 metres deep – roughly double the length and four times the depth of the proposed Fukushima wall.

Problem: During the project’s technical review process, the price of gold dropped to the point of economic unviability and the ice wall was never switched on.

The mine has changed hands several times and the new owner, St. Andrew Goldfields Ltd., is still studying what to do with Aquarius, its resources and the ice wall.

A significant deposit of zinc was left underneath 24 to 37 metres of liquid mine tailings after this site was decommissioned in 1971. Starting in September of 2001, Abitibi constructed a cofferdam – a frozen earth basin 61 metres in diameter, 35 metres deep, with walls 9 metres thick – to provide watertight structural support surrounding an excavation shaft. The ice wall also had to withstand the area’s substantial gradual downslope movement of rock and soil.

Problem: During early construction, brine leaked from a freeze pipe into the surrounding soil. The pipe was repaired. Mining the zinc continued from January to March of 2002, and as the ambient air temperature increased, the frozen wall started to slough on the side exposed to direct sunlight. Concrete blankets covering the wall could not stop the melting. In April of that same year, lightning damaged the refrigeration plants and the project was terminated.

Remediation plans call for containment of 237,000 tonnes of arsenic trioxide, a lethal byproduct of gold-bearing ore processing that is now stored underground. For the first three years of the mine’s operation, from 1948 to 1951, this proven carcinogen was simply discharged into the environment, killing a Dene child and local cattle. After this, the arsenic trioxide was buried. Now there is a proposed “frozen block method” that will hypothetically freeze the underground chambers of arsenic trioxide along with the surrounding ground. The complex remediation plan for the site is ongoing, with a projected cost of nearly $1-billion.

Problem: Alternatives North, a local social justice coalition, has released a technical report detailing concerns about the lack of investment in finding permanent options and perpetual care planning. The ground would have to remain frozen for generations, raising questions about long-term funding.

German mining engineer F.H. Poetsch patented the basic concepts used in ground-freezing projects around the world in 1863. Environmental engineering firm Burns & McDonnell notes that the process was first used in North America in 1888 to build a 30-metre-deep ice wall in Michigan.

Since then, ice walls have been used in hundreds of projects where soil stabilization is required to build infrastructure (mine shafts and tunnels), to keep groundwater out of an area (open-pit mining) or to contain contaminants (oil sands projects). The Society for Mining, Metallurgy and Exploration reports that no better technology exists for sinking excavations to depths exceeding 829 metres through water-bearing ground.

Intrigued by frozen ground barriers? Find more details about Giant Mine’s frozen block method at bit.ly/GiantMine. Read a detailed report about the Quémont Mine at bit.ly/Quemont.