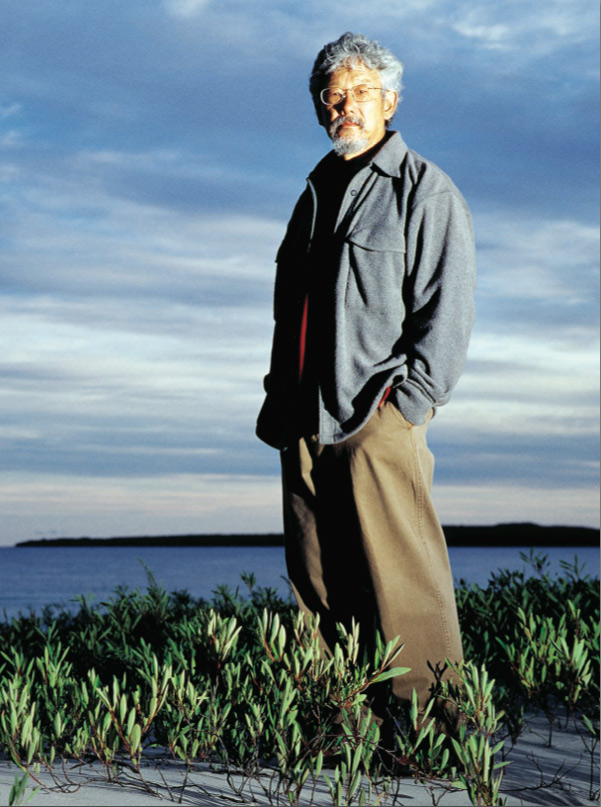 DAVID SUZUKI is an inveterate storyteller who first cast his spell on me in Toronto’s St. Paul Cathedral in 1989. He, Margaret Atwood, Gordon Lightfoot and others were raising money for the Amazon’s Kaiapo people. Twenty-two years later, I’m still enchanted. In our latest conversation, “The Doc” – as friends call him – parsed the latest environmental news as expected.

DAVID SUZUKI is an inveterate storyteller who first cast his spell on me in Toronto’s St. Paul Cathedral in 1989. He, Margaret Atwood, Gordon Lightfoot and others were raising money for the Amazon’s Kaiapo people. Twenty-two years later, I’m still enchanted. In our latest conversation, “The Doc” – as friends call him – parsed the latest environmental news as expected. But he also uncorked surprising barrages of laughter, F-bombs, salacious comments about Angelina Jolie and praise for the Boston Bruins.

People have dark and light sides, yin and yang. Suzuki slips easily into the thundering voice of old-time hellfire-and-brimstone preachers to describe an apocalyptic future, yet he just as freely outlines inspiring visions based on love, compassion and a sustainable economy achieved within a generation.

Suzuki believes, deeply, that we are capable of the systemic change that has eluded us so far. His own life testifies to the remarkable ability of human culture to evolve rapidly. At the age of six, Suzuki and his family were stripped of their possessions and sent packing from Vancouver to an internment camp for the “crime” of Japanese heritage. Almost seven decades later, a survey by Readers Digest found him to be the most trusted person in Canada. A 2004 CBC-sponsored poll voted him the greatest Canadian living.

A society that can reverse centuries of institutional racism in a few decades, Suzuki believes, has the potential to shift from destroying the planet to defending it.

He has seen progress in cherished places like BC’s Stein Valley and Gwaii Haanas. These may be mere pinpricks on a map on which many places are being irreparably harmed, but people are starting to change. Average house sizes are shrinking, motor vehicles are getting more efficient (“Finally!” Suzuki erupts), and localization may begin to challenge globalization. (He singles out the potential of the Transition Town movement.) Still, we have grabbed only the low-hanging fruit. We have yet to make fundamental changes.

Suzuki dismisses the ecological nihilism of James Lovelock, the British scientist who created the Gaia hypothesis and now thinks it is too late to prevent a mass die-off of humans and other species. “If that’s how you feel,” Suzuki says, “it would be better to shut up and go away.” He hopes that one day soon the light will go on and people will see that we are in the midst of a global ecological crisis, even if he cannot say what might trigger such an awakening.

Asked about his many accomplishments, Suzuki speaks most proudly of his children. He has five – too many, he confesses – all good people and committed environmentalists. As for what he has achieved for nature, Suzuki emphasizes that it takes many people to mount a successful campaign. Nonetheless, he takes pride in having helped protect many of his home province’s special places: Gwaii Haanas, the Khutzeymateen and Stein valleys, the coastal Great Bear Rainforest.

He beams when I ask about his David Suzuki Foundation (DSF). When he started the eponymous charity in 1990, he “thought it was the 11th hour and we had to act, spend all the money we raised. No point saving money if your house is on fire.” His view has lost none of its urgency, but he now concedes that change may take a generation. He attributes part of this shift to the birth of his latest grandson. Although the DSF has become one of Canada’s leading environmental organizations, Suzuki regrets it did not focus earlier on boosting the ecological literacy of children. Kids are open-minded, he observes, bond easily with nature and can persuade parents to go green.

These days Suzuki is an international celebrity. Still, he heaps praise on those who support him behind the scenes – none more than Tara Cullis, the love of Suzuki’s life since 1971. It was Cullis who insisted he begin thinking about solutions instead of just harping on problems. Cullis co-founded the DSF and, as its volunteer president, built the organization from scratch. When she thinks Suzuki is pushing himself too hard, she reminds him of their late colleague Jim Fulton’s exhortation: “Suzook, we have to be lifers.” Above everything else, Cullis makes Suzuki laugh.

Suzuki has dark moments. He gets frustrated, even angry. He has been sounding more or less the same warning for 35 years now. His scientist’s mentality is distressed by people’s seemingly irrational response to mounting evidence of ecological catastrophe. If we truly understood our utter dependence on ecosystem services and what scientists are telling us about nature’s decline, he says, it would become culturally ingrained that “you don’t f*** with the air, the water, the soil or biodiversity.”

Another bane is frequently feeling guilty. Suzuki is a passionate fisher but has seen stocks plummet during his lifetime. For years he went fishing with his friend Miles Richardson, a Haida leader, to stock their freezers. Three years ago he went to Haida Gwaii but could not bear to catch a single salmon. Today, he confesses, “It tears me up to go fishing.”

Suzuki believes you are what you do, not what you say. A degree of hypocrisy is inevitable: humans are imperfect creatures and everything we do has some impact. But the gap between Canadians’ words and actions is particularly broad. When polled, we say the right things about protecting the environment, yet we make unsustainable lifestyle choices, elect governments that ignore nature and complain loudly when greener policies threaten to cost us money. Suzuki worries that too many Canadians view him as their surrogate, watching him tilt at windmills so that they needn’t make an effort.

So how do you avoid despair when humans are wreaking havoc on the Earth? Suzuki offers three pieces of advice.

The first is to spend time with people you love. Suzuki is very close to Cullis and their daughters Severn and Sarika, even if they regularly give him hell.

His last advice: exercise. Working out has both physical and mental benefits.

Suzuki has reaped a staggering harvest of honours. His best writing, in The Sacred Balance and The Legacy, should inspire generations, as do the enduring words of Leopold or Rachel Carson. Yet beyond the books, articles, radio programs, TV shows and speeches, Suzuki’s real legacy is the people he has touched. My story is one of millions. Reading his It’s a Matter of Survival in 1992 led me to board a bus to Vancouver for a new career as an environmental lawyer.

As I’ve come to know Suzuki, I’ve been most struck by his generosity. He has poured hundreds of thousands of dollars and thousands of volunteer hours into his foundation. He gives time to countless groups. He praises friends lavishly. The Doc is like a sea urchin from his beloved tidal pools: sharp and prickly on the outside, but soft on the inside. When I left his office on a sunny day last November, he was hunched over his desk, hand writing a personal response to a child who had sent him a letter with questions about the ocean.

David Richard Boyd is an adjunct professor at Simon Fraser University, and is the author of Dodging the Toxic Bullet: How to Protect Yourself from Everyday Environmental Health Hazards.