The Surfrider Foundation is a North American organization devoted to protecting ocean shorelines. The organization was formed in 1984 and has made reducing plastic waste a major priority. In November 2016, Hanjin Shipping Co.

The Surfrider Foundation is a North American organization devoted to protecting ocean shorelines. The organization was formed in 1984 and has made reducing plastic waste a major priority. In November 2016, Hanjin Shipping Co. spilled 35 containers of plastic debris across Barkley and Clayoquot Sound. The Pacific Rim chapter of the Surfrider Foundation helped clean up the spill. At the time, there was no plan for that kind of environmental emergency. No one seemed to know which departments of the federal government were expected to respond or what they were supposed to do.

Tla-o-qui-aht First Nations officials weren’t notified of the spill by the federal government, even though it landed in their traditional territory. Before the end of the month, the local MP Gord Johns put forward motion 151, calling for a national strategy on plastic pollution. The strategy would include preparation for marine debris accidents and help prevent marine debris through more regulation of industry.

Johns also reached out to the Vancouver Island Marine Debris Working Group (VIMDIWG), of which Surfrider was a member, along with other environmental groups and stakeholders in B.C.. They would meet up every few months to create more awareness for motion 151 and to put pressure on the government to adopt the proposed recommendations. In December 2018, motion 151 was passed unanimously in the House of Commons. It is the first motion to regulate plastic in Canada.

12 of the organizations Johns first contacted are still meeting regularly to take action on plastics, and recently announced a call for the Environment Minister of Health to add any plastic generated as a waste, or discharged from the use or disposal of products or packaging, to the Schedule 1 List of Toxic Substances under the 1999 Canadian Environmental Protection Act (CEPA). This idea was inspired by Ecojustice, who requested the government to add microbeads to the Priority Substance List under CEPA in 2015 on behalf of Environmental Defence, Lake Ontario Waterkeeper, and Ottawa Riverkeeper. It was successful and microbeads were subsequently banned in Canada, but this is still a relatively untested tactic.

On June 10th, the federal government announced their plan to ban single-use plastics in 2021. A\J met with Lilly Woodbury, representative of Surfrider Foundation Canada, to talk about plastic pollution.

A\J: Can you tell me why this is so important?

Lilly Woodsbury: The reason this is so important is because Canada has the longest coastline in the world. We have thousands of freshwater lakes and rivers, so the vitality of this country is dependent on its waters. Addressing plastic pollution has incredible benefits for biodiversity, of course, for protecting our marine and freshwater ecosystems, and thus food security, and for mitigating climate change. It creates benefits for all types of industries, including the shipping industry, the tourism industry, the recreation industry, fishing and aquaculture, and the list goes on, the benefits go on, because everything is connected to the waters. And so that’s why it’s essential, because right now we have a chance to turn it around. We’re not always going to have that option.

A\J: What are your thoughts about Trudeau’s recent promise to ban single use plastics in 2021?

LW: Yeah, so we’re very excited about that goal. It’s definitely needed. The recommendation that we had during motion 151 was to ban a comprehensive list of single use plastics. The federal government hasn’t announced or specified what those are going to be exactly. But we really do hope that it covers a comprehensive list of single use plastics that are not essential, like drink stirs, like plastic straws, bags, takeaway items, the types of products that are really hard to recycle and that end up in landfill and ecosystems.

On top of that, they also said they want to get more standardized, Extended Producer Responsibility (EPR) set up. Putting more responsibility on the producers of plastic products and packaging to take back those items and recycle them is really, really important. We put that forward as a recommendation in motion 151 as well.

Investing in finding alternatives to plastics for small and medium sized businesses. Of course, we don’t want them to bear the brunt of this. We want to make sure that they’re supported. So I love that his government mentioned that, as well as working with industry and businesses to establish innovative solutions for transforming plastic waste into a resource. We know we’re throwing away billions of dollars’ worth of plastics. And that’s a massive resource. If we can keep that in the loop, we don’t need to be extracting more raw petroleum to turn into virgin resins, which again, has a huge ecological impact. And so by closing the loop of the plastic economy, we can actually create jobs and lower pollution. It’s just fantastic.

So those are all the goals that are outlined. Again, these haven’t been fully confirmed, but they give us an idea of what it could look like, which we definitely support. And the current steps being taken by the federal government include researching these goals, facilitating consultations with industry and Canadians, as well as establishing those consistent EPR (Extended Producer Responsibility) standards for products across Canada. And then ensuring that the final standards regulation mirror the actions taken by the European Union, which are also very positive. And of course, they’re also doing the scientific evaluation of plastics to see if it should be added to the list of toxic substances under CEPA.

A\J: It was interesting, I never really thought of the concept of plastic as a toxic substance. But then I thought, Well, obviously it is. And it’s just fascinating that until now it hasn’t been added. I mean, it’s not healthy. It’s not safe.

LW: Exactly. And I think that it’s hazardous when plastic becomes a waste, when it goes into the environment, and we basically lose all control of it. Whereas if it’s a product or package that’s being responsibly managed and is going to be recycled, then I think it’s not a toxic substance.

A\J: It’s just so normalized as well. At first I thought “Oh, plastic is a toxic substance?” and then I thought “But it could be.” I think it just isn’t an idea that occurs to most people, because it’s everywhere.

LW:  It is, it’s everywhere, and that’s part of the big shift is denormalizing our plastic use. We’re so dependent on it for everything. And it has some great applications, but we do not need to be as dependent on it as we are. So a big part of it is educating people and bringing awareness to the alternatives that are accessible for people to tap into to help them cut their plastic footprint, and therefore the carbon footprint, the water footprint, everything. 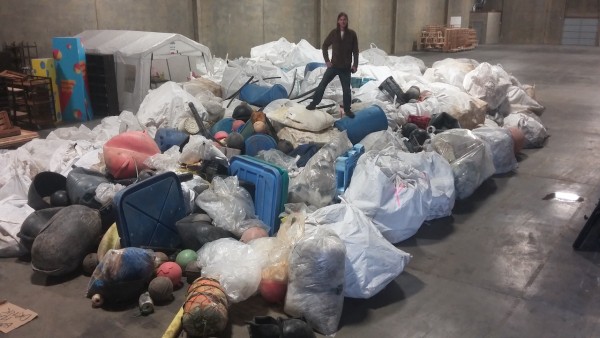 A\J: So you said you grew up around Vancouver?

LW: Yeah, I was born in Tofino, Vancouver Island. I only lived there until I was four. But even then, I had such a strong connection to the ocean. My first memories are playing on the beach.

When I was four, I moved to Manitoulin Island on Lake Heron. And I actually lived next to Lake Huron, right on the lake. I was always a very outdoorsy person, I always loved the waters. It made a really big impact on me. But I didn’t grow up with a lot of environmental education. I wasn’t really aware of the issue in my elementary school or my high school. I think part of that was where I lived was pretty pristine, and it just wasn’t talked about. So when I finally came back to Tofino at 18, I started learning about the environmental issues threatening the coast, threatening this incredible place. And I love the outdoors. The outdoors inspired me so much and gave me so much joy. They’re the very reason for our existence. And I felt that my purpose here on Earth is to make a difference, to regenerate the planet and to help other people do the same.

A\J: Would you say plastic regulation is more connected to the marine environment than it is to other environments, like forests?

LW: I’m glad you asked that. I think some Canadians might have a hard time identifying with this issue. But it isn’t isolated to the oceans, it’s also in our lakes and our rivers. You know, in the Great Lakes there’s an issue with plastic pollution. You can measure the water in the lakes, and you’re finding microfibers, you’re finding microplastics. So the issue really is across all of our waters.

But when it comes down to the terrestrial, plastics still do pose an issue when we see them as litter or breaking down in forests. A great example of this is here on the coast, we have really big storms and really high tides in the winter. And so a lot of the plastic, especially Styrofoam, will be washed onto the shore in tiny, tiny pieces and totally inundate the soil. I’ve gone to places where you’re finding marine debris a meter thick into the forest soil, or finding bottles that wolves have tried to eat. So this is impacting the terrestrial ecosystems and animals as well. Anywhere in Canada, you can find plastic littered in a ditch, or forest, or beach or stream or river. It impacts all ecosystems.

One of the important details about this issue is that plastic doesn’t biodegrade. Instead it photodegrades, which means it breaks into smaller and smaller pieces until they’re so small they can’t be seen. Microfibers, a special kind of tiny plastic fibres that come from synthetic clothing when washed, are already too small to be filtered out when they enter the water system. The danger of plastic is that it accumulates in the environment and it readily absorbs pollutants. And all sea animals, from plankton to whales, consume plastic. The plastic pollutants bioaccumulate and biomagnify, and 100,000 sea animals starve to death each year because their stomachs are too full of plastic for them to eat. This damages biodiversity and food security, both of which we need to face the unstable future that climate change brings.

It’s important to remember that these problems are not insurmountable. Clothing can be made from natural fabric such as hemp or cotton. 8 million tons of plastic waste is thrown away and ends up in the oceans every year, but it could be integrated into a closed loop system. We can implement EPR and ensure that those who create and profit from plastic products are made responsible for collecting and recycling them. A circular plastics economy would help keep the oceans clean, protect human health, and create jobs and revenue for Canada. And if we make sure the federal government keeps its word, we’ll be on the way to creating an economy that leaves plastic waste behind.

Lauren is an editorial intern with A\J. She is an aspiring creative writer and recent University of Waterloo graduate.