In 2020, it’s very hard to not have had any exposure to the newest technologies. If you have ever played video games, gone virtual furniture shopping, used Snapchats filters, or even participated in Zoom calls during the pandemic, you have been exposed to the world of virtual and augmented reality. Many of us come into contact with this technology every day, and yet we don’t even notice it.

Digital devices are being increasingly adopted for learning and education purposes. Computers and online learning have become intensively and widely used in the last decade or so, and with the pandemic restricting students from their classrooms, our reliance on online learning has never become more prominent. Virtual reality (VR) and augmented reality (AR) technologies, although not new innovations, are actively being incorporated into education, teaching, and training in various application domains. Virtual reality is a simulated experience that can be similar to or completely different from the real world. This differs from augmented reality, where it is an interactive experience of a real-world environment where the objects that reside in the real world are enhanced by computer-generated perceptual information.

The greatest challenges in environmental education is communicating climate science to the public and bridging the knowledge-to-action gap. This gap refers to the general lack of environmental behaviour change by individuals or society at large despite increases in communication about environmental problems. Recently the nature documentary film David Attenborough: A Life on Our Planet has received a plethora of media attention for the use of the negative framing of human-induced climate change impacts on nature. Research has shown that the content of the message, and level of visual immersion can have an impact on the intensity of emotional responses and influence behaviour. The emotional impact of VR has proven to increase awareness, evoke empathy, and elicit action.

Virtual reality has been described as the learning aid of the 21st century. But where are these technologies being implemented in education? Simulation is a cornerstone for clinical and medical training in many post-secondary institutions across the country. Queen’s University in Kingston Ontario, is advancing the development of adaptive AR and VR simulations for many facilities, including Engineering and Applied Sciences. Even pilots that we trust flying us across the globe have used flight simulators in their training programs for decades. In both industries, VR and AR are ushering in an entirely new era of educational tools. But where is this technology in environmental education? 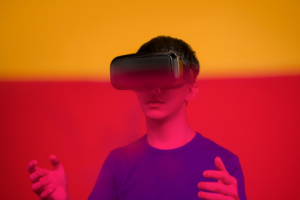 Dr. Paul Mensink, professor at Western University, takes his students on a marine biology field course in New Brunswick every year. Through the Ontario Universities’ Program in Field Biology, Western University offers a marine biology course at the Huntsman Marine Sciences Centre in New Brunswick. The trip provides the students with real- world scenarios of ecosystem issues. Dr. Mensink is trying to incorporate VR into his teaching to create more efficient learning processes and better outcomes. “There can be a lot of logistical problems with field trips like this, health and safety, accessibility […] there are just a lot of moving pieces involved that make it difficult to organize” he says. “I can pack the same amount of learning that would be done by taking students out on a 2 to 3-hour field trip, into a 5 to 10-minute virtual reality experience.” With virtual reality, Dr. Mensink is bringing together technology and environmental education, to create a better experience for students. For instance, he can take his students out on a simulated scuba dive to explore the coral reefs. “I can take the students out to places that they otherwise would not be able to go to and give them a more interactive and immersive learning experience.” In a VR simulation, students use headsets to view their surroundings. When the user looks right, they see the video footage to the right, when they look down or when they look up, they see the corresponding video footage – for instance, showing the sea floor or the surface of the water.

Dr. Mensink was even nice enough to give me a tour of his game-based learning scenario that can be run on a computer or VR headset. The game- based learning scenario brings in realistic simulation of jobs to build into comprehensive case studies. His goal is to create an attachment to the learning by allowing students to visualize the data of which they are analyzing in class. His game simulation, which is used to represent the monitoring of endangered species, uses government aerial survey monitoring for protected marine mammal species. The simulation takes the data that has been collected from the field and represents it in a real-world scenario. In the tour he gave me, we looked at different characteristics of whale species, such as their size, speed, and their species population. Even things such as the number of boats and the speed to which they sail at is collected. “The idea of the realistic simulation is bringing together everything to understand the data through experiencing the data and understanding where it is coming from” Dr. Mensink explains. The simulation will teach students about proper sampling designs, observation bias, and collection of one’s own data. The result of the game: endless practical knowledge. Just one example of practical use is allowing students to think about how to implement policies and protocols that can reduce conflict between fisherman and mammal species by imposing speed and boat limits. “It creates opportunities for students that otherwise wouldn’t be there”, like putting them in a plane to make an aerial survey of whales.

The opportunities seem endless in the virtual and augmented realm, but that doesn’t mean that there aren’t challenges that come with it. “We have to think about where and when it should be used. We don’t want it to act as a blanket to be used over everything”, Dr. Mensink claims. VR simulation is not a panacea. Rather, it is a tool used to accomplish a defined set of learning goals and should be used as such, integrated within an institution’s curriculum and pedagogy to ensure effective use. 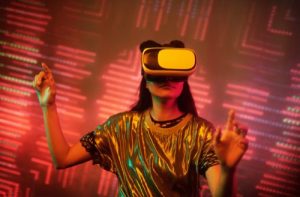 Cognitive overload is a term that scholars use when your working memory receives more information than it can handle comfortably, leading to frustration and compromised decision-making. Virtual reality can sometimes be so overwhelming for the students that they are unable to report on what they are seeing in real time. This challenge represents the technology’s lack of flexibility in that students are unable to ask questions, receive answers, and even take notes during usage. The challenges are identifying places or situations where it is far superior to be using virtual and augmented reality over the real-world environment. Ultimately, there is no scenario where virtual reality replaces real-world experiences, they just want to take the benefits of this technology and bring it into the classroom for a more blended, well-rounded approach to teaching.

Where does the future lie? Rather than simulations being occasional, faculty-led, day-long events, VR simulation will continuously expand and improve in performance to suit learners needs. Increasing hand control, voice control, haptics (sense of touch in VR), will all become increasingly used and become integrated within scenarios to blur the lines between real and virtual.

Imagine the possibilities. Imagine being able to view endangered species and simulate their road to recovery. Imagine experiencing a simulation of ocean acidification, deforestation, or desertification. Imagine scuba diving in the coral reefs while you sit next to your classmates. Imagine if every environmental student learns, like medical students, from virtual reality and augmented reality. The possibilities for the future are high, and technology is at the forefront. Technologies, like VR and AR, have come a long way. These technologies have helped to increase awareness in our society; evoke empathy into the minds of our youth. It now must elicit action.