THE SCALE OF GLOBAL CRISES IS TRULY DAUNTING, making us feel helpless and incapable of affecting the course of global events. Yet the experience, knowledge and wisdom of Indigenous peoples and local communities unequivocally demonstrate that a different way of living on the planet is not only possible, but practical – and increasingly imperative to improving our rapport with the environment.

THE SCALE OF GLOBAL CRISES IS TRULY DAUNTING, making us feel helpless and incapable of affecting the course of global events. Yet the experience, knowledge and wisdom of Indigenous peoples and local communities unequivocally demonstrate that a different way of living on the planet is not only possible, but practical – and increasingly imperative to improving our rapport with the environment.

For millennia, Indigenous peoples have maintained an intimate relationship with their revered Mother Earth, something that our modern world has all but forgotten. Indigenous peoples have contributed little to climate change’s causes, and the cruel irony of their predicament is that they are affected first and hardest. Still, they refuse to be mere victims of the unfolding crisis. Instead they are becoming a growing creative force behind local, regional and global solutions.

While they represent only four per cent of the world’s population, Indigenous peoples still steward more than 20 per cent of the Earth’s surface, which supports 80 per cent of its remaining biodiversity. They are excellent observers and interpreters of the conditions and changes in the environment, and can offer invaluable insights into the past, present and future of our planet.

In a world scrambling for answers to the challenges of climate change, Indigenous peoples have important contributions to make. Their medicinal and agricultural expertise contributes greatly to global health and food security. Their ecological wisdom can be the foundation for appropriate local adaptation and mitigation strategies. Their stewardship of traditional homelands protects the majority of the world’s biological and cultural diversity.

“We [Indigenous peoples] have the knowledge that can contribute to finding solutions to the crisis of climate change,” explains Marcos Terena, an internationally renowned Xané leader from Brazil. “But if you [developed nations] are not prepared to listen, how can we communicate this to you?”

Regrettably, for the majority of people in developed countries, climate change remains a set of largely frightening projections based on impenetrable science. The general public sees few examples of how CO2 accumulation touches human lives. Meeting with and listening to real people sharing their climate change experiences is one important way to become familiar with the issues, develop a deeper understanding of others’ predicaments, grow less fearful of impending changes and become more proactive about finding solutions.

Conversations With the Earth (CWE): Indigenous Voices on Climate Change creates a virtual and exhibit space for Indigenous voices to be heard in the global conversation about climate change. The multimedia project is a partnership between Land is Life, InsightShare and award-winning photographer Nicolas Villaume. CWE’s purpose is to share traditional knowledge and perspectives, and to assert Indigenous peoples’ rights to their territories and resources as a primary condition of their resilience to climate change.

This CWE photo essay comes from Manus Island, the fifth largest in Papua New Guinea. King Tides (unusually high) happen two or three times a year, but nothing in living memory or legend compared to the tides during a pivotal four-day storm in December 2008. It scoured shorelines and decimated animal habitats. It destroyed homes and forced families to relocate. The rising sea level and growing intensity of winter storms continue to challenge these coastal communities. They are harbingers of a rapidly changing planet. 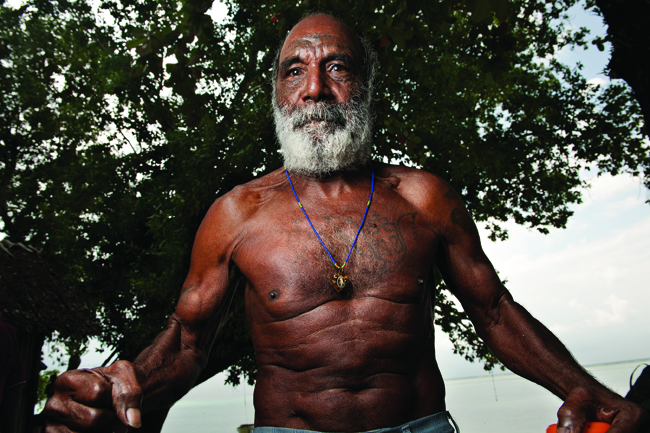 “I won’t go. Maybe it’s God’s plan to destroy the land. But this is my home, and this is the home of my great-grandfather. I will move my children. Maybe my grandchildren will visit me. But for me, I will die here on this Island.” 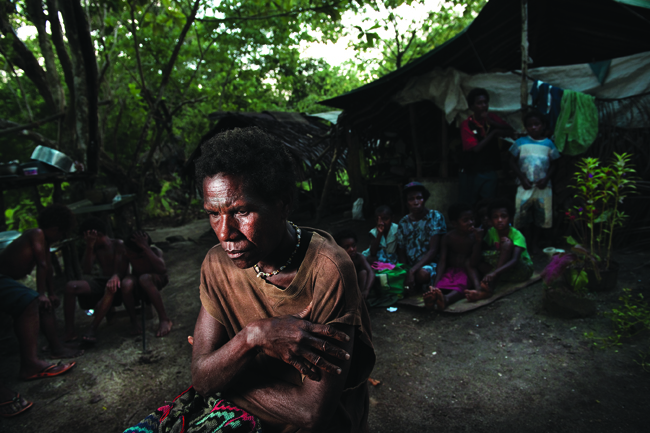 Solomon family after the King Tide storm in 2008

“We ran. The waves went into the house. We tried to break it apart and bring it inland, but saw there was no hope.” 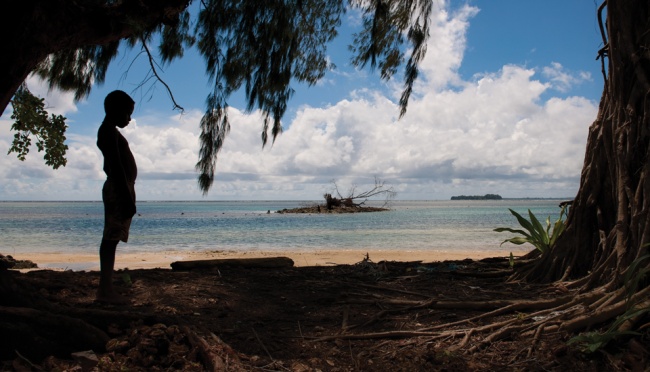 Photos by Nicolas Villaume. Nicolas Villaume specializes in photographing people in demanding social environments­. He collaborates with international NGOs and cultural institutions (including UNESCO) and his work has appeared in Mother Jones, Boston­ Globe, National Geographic Newswatch and other publications.

Conversations with the Earth shares the the voices of indigenous peoples on climate change from around the world. Mobile versions of Conversations with the Earth are being developed in several different languages in order to make them available to local and Indigenous communities worldwide. In 2013, the CWE exhibit will be in Thunder Bay, Ontario; Lima, Peru; Quito, Ecuador; and Lorengau City on Manus Island. View the full Manus Island photo essay online. CWE Website | Facebook Page

Gleb Raygorodetsky is an adjunct research fellow with the Traditional Knowledge Initiative at United Nations University – Institute of Advanced Studies, and a research affiliate with the POLIS Project on Ecological Governance at the Centre for Global Studies, University of Victoria in BC.