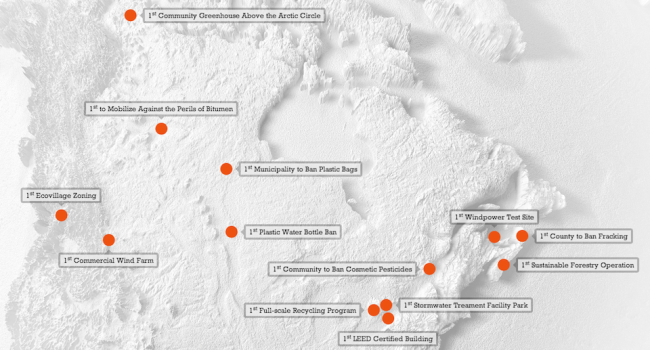 Click here to launch the First Places interactive map, or read on for just the text version.

1st Ecovillage Zoning
In 2006, the founders of Yarrow Ecovillage convinced the city council of Chilliwack, BC, to approve a unique zoning regulation that increased their land’s maximum density from five to 40 residences. The exception allowed the community of 65 to build a multi-generation co-housing development, an education centre and commercial operations such as a café and deli. Similar legislation exists in other places under different names, such as the Comprehensive Development Zoning in Cowichan Valley, BC, passed in 2003. yarrowecovillage.ca

1st Community Greenhouse Above the Arctic Circle
The Inuvik Community Greenhouse opened in 2000 after local volunteers and Aurora College students spent two years converting a decommissioned arena to accommodate 74 full-size garden plots (3 by 1.2 metres each). The gardening season runs from May to September, and the greenhouse is heated by the 24-hour sunlight throughout the summer. inuvikgreenhouse.com

1st Commercial Wind Farm
Commissioned in 1993 and built out in phases, the Cowley Ridge wind farm near Pincher Creek, Alberta, has 57 turbines mounted on bolted steel structures that look more like transmission towers than the sleek columns being installed today. Fourteen turbines are currently being refurbished, but the farm still feeds the grid with a capacity of 21 Megawatts, enough to power 7,665 homes for a year (based on the energy used by a Calgary household). bit.ly/FirstWind

1st to Mobilize Against the Perils of Bitumen
The Keepers of the Athabasca have organized the Tar Sands Healing Walk annually since 2009 to acknowledge the mining operations’ destructive impact on the climate and to the livelihoods and landscapes of those who live downstream. In 2013, hundreds of people joined First Nations and Métis locals in a 14-km walk alongside tailings ponds north of Fort McMurray. healingwalk.org

1st Municipality to Ban Plastic Bags
The Northern Manitoba town of Leaf Rapids banned plastic bags in 2007. While there are only two major retailers in the town of about 500 citizens, it’s still an impressive feat. townofleafrapids.ca

1st Plastic Water Bottle Ban
In March 2009, University of Winnipeg students voted by a three-to-one margin to eliminate more than 38,000 bottles sold on campus every year. The measure adds to an already strong sustainability agenda that has implemented a composting program and an improved recycling system that includes batteries, e-waste, cartridges and light bulbs. bit.ly/BottleBan

1st Full-Scale Recycling Program
It began in 1981 with more than 1,000 homeowners in Kitchener, Ontario, separating used steel cans, glass and paper from other garbage. Today, 95 per cent of Canadians have access to recycling programs that can divert 25 per cent of their waste from landfills, and blue boxes are deployed all over the planet. bit.ly/Recycle1st

1st LEED Certified Building
In 2005, Stratus Vineyards was granted the first Leadership in Energy and Environmental Design certification in Canada for its winery building in Niagara-on-the-Lake, Ontario. Most impressive is the geothermal technology used to heat and cool the building, but other important features for achieving certification included the recycled insulation and reclaimed wood and steel used in construction, the operation’s composting of plant material waste, and the bike locks and showers for workers. stratuswines.com

1st Community to Ban Cosmetic Pesticides
Responding to citizens’ health and environmental concerns, Hudson, Québec, became the first town in North America to create a bylaw to control the use of cosmetic pesticides in 1991. Two companies, Chemlawn and Spraytech, were charged in 1992 and took the municipality to court to have the bylaw declared invalid. Nine years later, the Supreme Court ruled in favour of the municipality, setting a Canada-wide precedent for local environmental protection. bit.ly/PestBan

1st Windpower Test Site
The Wind Energy Institute of Canada has been testing and improving wind turbines at North Cape, PEI, since 1981. The peninsula’s harsh marine environment and highly variable weather conditions between summer and winter have made the facility vital to considering turbine applicability across Canada. weican.ca

1st Sustainable Forestry Operation
The ancient Acadian forest on Windhorse Farm has been harvested for timber each year since Conrad Wentzell settled here in 1840. Today it remains a stunning example of land stewardship, and the Drescher family (who took ownership in 1990) is committed to maintaining the “functional integrity” of the forest alongside educational and work-study programs and a retreat centre for vacationing naturalists. windhorsefarm.org

1st County to Ban Fracking
In October 2012, Inverness County, Nova Scotia, passed a bylaw prohibiting exploration or extraction of oil or methane gas through hydraulic fracturing. Like the pesticide case in Hudson, QC, there is a concern that municipalities do not have jurisdiction over extractive operations, but the case is moot until Nova Scotia’s independent review of fracking has been done. The review was originally set to be completed in 2014, but it has been extended until an unknown date to include public consultation and expert panels. nofrac.wordpress.com