The streets are busy this afternoon. Romain and I weave our bikes through the downtown Montreal traffic, balancing on our seats and maneuvering the narrow bike lanes with our bright red backpacks. We are en route to visit one of our dozen Meals On Wheels clients.

When we arrive at our destination, we lock our bikes and walk up the three stories of steps together to her apartment. We knock, wait for the sounds behind the door that announce her arrival, and are greeted by our client’s bright smile and a warm hello. Romain speaks with her as I pull her meal from our insulated bags – a hot serving of lasagna made with locally-grown vegetables, an organic fruit salad, and a slice of cake baked fresh this morning in the kitchen of Santropol Roulant. When I straighten and the meal changes hands, she beams and asks us in for a quick snack of tea and cookies. We happily accept and I practice my French speaking skills with a new friend I have only just met.

For every dollar invested in the program, Katimavik volunteers produced $2.20 of return through volunteer work, $1.20 of which was directly reinvested in their host communities.”

When we leave, Romain tells me that taking the time to visit with our clients is important, even if it slows down deliveries, because we might be the only people she sees today. We ride on to our next client’s apartment, my mind whirring with thoughts about an individual’s role in the world – and how being here, now, with these people and in this place feels so incredibly right. 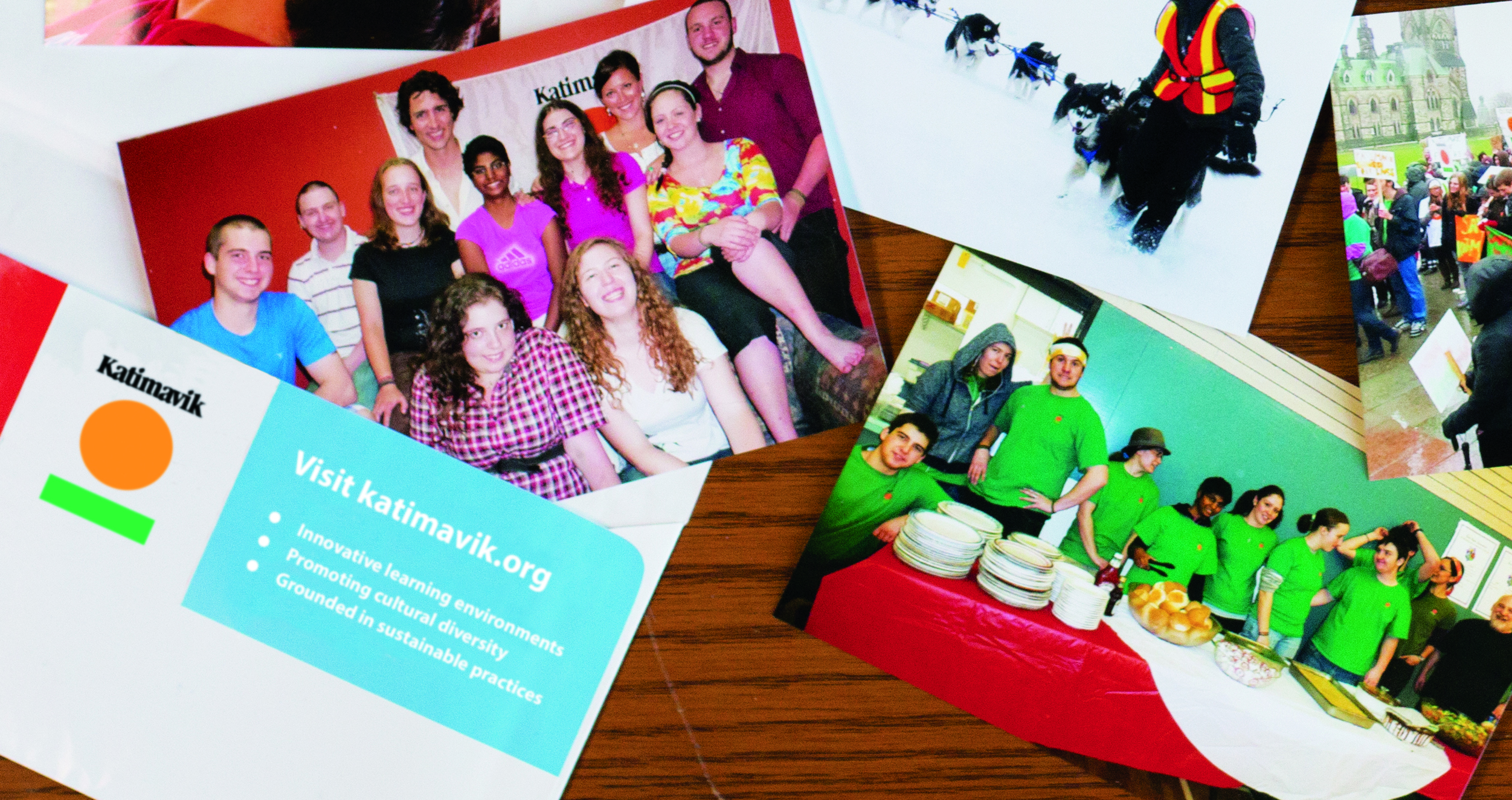 On paper, Katimavik sounds like a well-rounded program. Founded by Liberal Senator Jacques Hébert and brought into being by Prime Minister Pierre Elliot Trudeau in 1977, the Katimavik program garners its name from the Inuktitut word for “meeting place.” In the core program, youth spend six or nine months in two or three distinct Canadian communities, volunteering full-time with non-profit organizations and spending evenings and weekends engaging in activities they organize as a group via consensus.

In its first year, 1000 volunteers signed up to take part in projects in 40 communities across Canada, funded by the Canadian government.  In 1984, the program was internationally recognized and honoured by the United Nations for its environmental work done in host communities.
In 1986, Brian Mulroney’s Conservative government cut the program’s funding; Katimavik continued as an outdoor recreation program until 1994 when it was revived under Jean Chrétien’s Liberal government. It continued to morph and change in the years following, always maintaining its core value to develop youth into engaged, caring citizens and Canadian leaders. Since it began in 1977, it has impacted the lives of 35,000 youth volunteers  and more than 500 Canadian communities.  For every dollar invested in the program, Katimavik volunteers produced $2.20 of return through volunteer work, $1.20 of which was directly reinvested in their host communities.

Before I flew to my first placement in Quesnel, BC, in January of 2012, doubts ran rampant in my head about finances, fitting in, working in volunteer placements that might not be right for me, and my ability to learn enough of my second language to speak with my Francophone housemates from Quebec. The $14 weekly spending money allowance was quite small, and with only 16 hours per week allocated for unstructured free time, I worried about student loan payments and personal burnout.

After arriving and settling into my new life with my Katimavik family, my doubts disappeared. I was in an intensive household environment where conflicts weren’t uncommon between twelve youth participants, and solving everything from grocery preferences to activity planning was discussed and resolved through weekly consensus meetings that sometimes took hours. But these experiences taught me so much about myself and forced me outside my comfort zone and into new opportunities for learning about my strengths, voice, and gifts.

Our host communities gave us a respect I hadn’t experienced often as a youth contributor. People were always so excited and thankful to see us volunteering at community events, and we were often recognized for our efforts at volunteer opportunities our Project Leader organized for us during evenings and weekends. My green Katimavik volunteer shirt started to feel like a superhero’s costume that made me feel confident and able to enact real change in my community. It’s hard for me to voice how important it is to feel appreciated and recognized for the work I do as a young Canadian. Millennials get a bad rap in blog posts and magazine articles, but there’s nothing better than proving with my actions that we are valuable, contributing and creative members of Canadian society – and being validated in this by the people we work alongside to make our country inclusive, strong, and tight-knit.

Katimavik was not just another youth adventure program.”

Katimavik entirely changed my career. I had entered university planning to become a wildlife biologist, working in remote parts of Canada studying human impacts on predator and prey populations. However, when 40 hours of my week were dedicated to helping kindergarten students learn how to write their names, biking books to a low-income neighbourhood to facilitate a mobile library program, and cooking in a kitchen with a continuously different group of strangers who soon became friends, my perspective shifted. Katimavik gave me a passion for service to others and a strong desire to be part of non-profit organizations that make tangible differences for people in my community.

This program taught me how to be present and active in solving interpersonal conflict, where my past self would have run and hid from addressing problems that affected me. I learned direct and kind communication to make sure my needs were met. More than anything, Katimavik gave me back my bravery I’d long since buried.

In March of 2012 in the middle of my Katimavik experience, Stephen Harper’s Conservative government tabled its budget, announcing a swift end to Katimavik at the conclusion of June, despite recognitions and accolades given by the PM’s office and the Minister of Canadian Heritage, the honourable James Moore, weeks before the budget was released. Members of my group paid for our bus tickets to join 150 current and alumni volunteers for a protest on Parliament Hill, asking the Conservatives to grant the 600 youth already registered for the July-December program the same transformative experience.

While my group was living in the Papineau riding of Montreal, you were our Member of Parliament. At that time you were not the leader of the Liberal Party – let alone Prime Minister – but after a string of emails with your assistant, you became our dinner guest at our Katimavik house for an evening. We spoke at length about your time as chair of Katimavik’s board and your deep respect for the program and what it brought Canadian youth. I was truly impressed by your humility, desire to know about us individually and as a group, and your passion for young people and the Katimavik program.

As the 2017 budget will soon reveal, the priorities of the Liberal majority government for the upcoming year, I hope that your passion for youth engagement in Canadian society is still as white-hot as it was around our oversized kitchen table. Canadian youth are still facing unemployment levels near double the national average, despite being part of the most highly educated generation in history. In many countries, it is customary for youth to take a gap year between high school and university, but this idea still hasn’t resonated in Canada where sometimes beginning a career can feel like a years-long bottleneck battle.

Katimavik was not just another youth adventure program. It created space for multiple platforms of change – starting in the hearts and minds of its young participants. For example, you have committed your government to uphold the findings of the Truth and Reconciliation Commission and work “to design a national engagement strategy for developing and implementing a national reconciliation framework” with Indigenous peoples.

Katimavik is working on its side of this promise as well – promising to “enable volunteers to become informed, thoughtful, capable women and men who can facilitate and lead reconciliation activities within their own communities.” If you are serious about igniting youth to be active citizens who bring Canadian values to our communities at home and abroad, I ask that you support the renewal and expansion of the Katimavik program so many more youth from Indigenous and non-Indigenous communities can have the same opportunities, growth, community, and renewed hope that I experienced in 2012.

Mr. Prime Minister, we are counting on you to bring this opportunity back to Canadian youth – and with it, the feeling of empowerment that means so much to Katimavik alumni and continues to impact our lives today.

Ainsley Munro is a Katimavik alumna who lived in Quesnel, British Columbia, and Montreal, Quebec, during her six months in the program in 2012.