4 weeks ago
When the Sky was a Different Colour
1 month ago
The WTF: The Week This Friday Vol. 62
2 months ago
Can You Hear Our Earth Dying? – Journalism and the Environmental Movement
2 months ago
A Word from Our Founder, Time Flies – A/J Pilot Issue Revisited
2 months ago
Get Your Voice Published – Call for Young Writers!

The largest gathering of people on Earth happened on one day in 2013.

There will not be another mass congregation on the Ganges River or anywhere else until 2157.

What event could draw 30 million people? To the same place, on the same day? A rock concert? A pilgrimage to Mecca? A political rally? A space shuttle blast off? New Years in Times Square? A holy dip? If you chose the last option, you are on the right track.

The largest gathering of people on Earth happened on one day in 2013.

There will not be another mass congregation on the Ganges River or anywhere else until 2157.

What event could draw 30 million people? To the same place, on the same day? A rock concert? A pilgrimage to Mecca? A political rally? A space shuttle blast off? New Years in Times Square? A holy dip? If you chose the last option, you are on the right track. On February 10, 2013, 30 million human beings gathered on a flood plain outside the city of Allahabad/Prayag in North India to take a holy dip in the flowing waters of the Ganges, the Yamuna, and the invisible Saraswati. 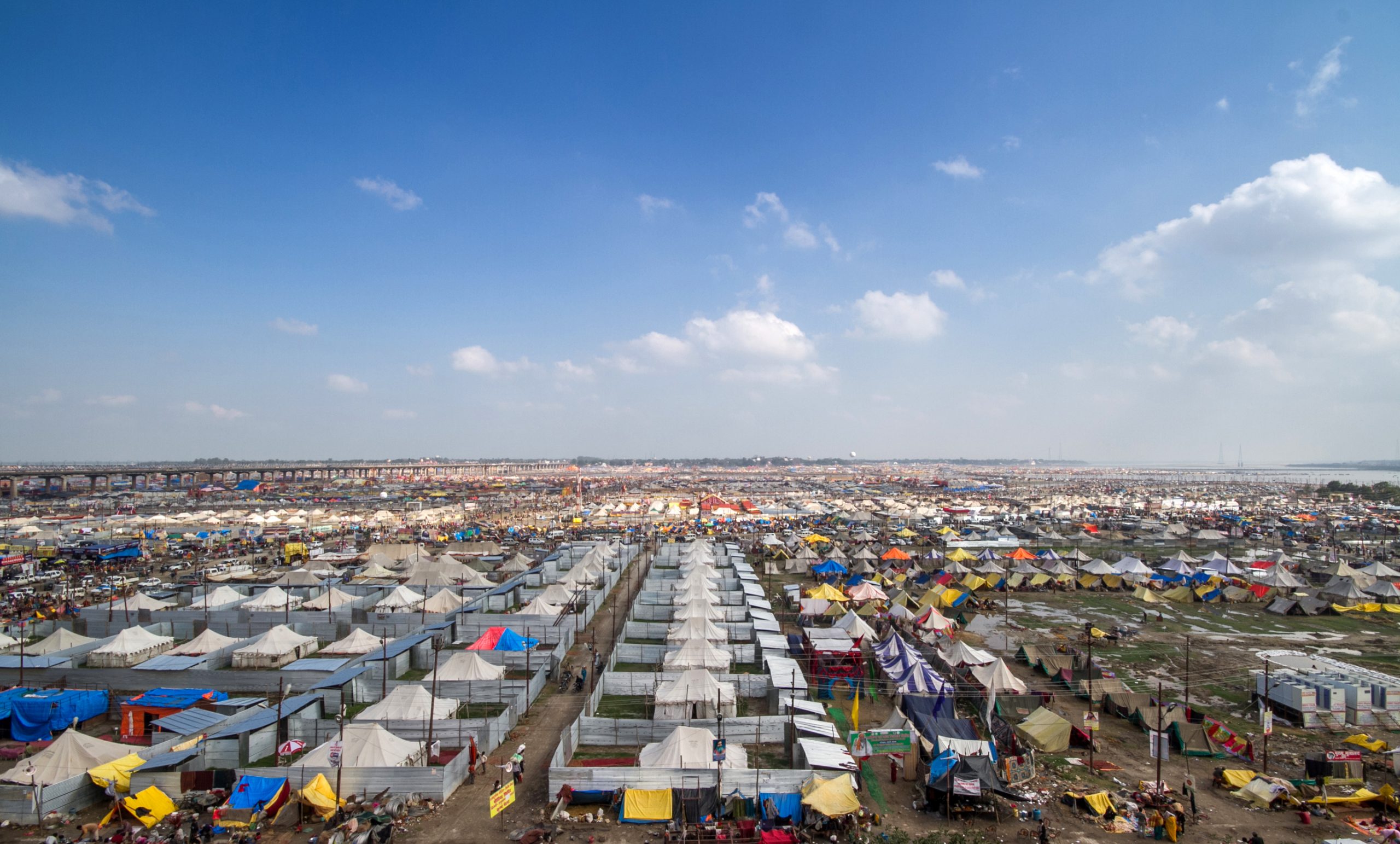 The temporary tent city is constructed on the flood plain that annually finds itself under several metres of water during monsoon season later in the year. Photo by Kris G Hariharan

It was my third Kumbh – I had come in 1989 (16 million) and in 2001 (20 million) – and it continues to defy easy description. Most pilgrims/yatri come for many days, and not just for the most auspicious day. I’ll always remember Ram Sharma and two friends from a village in Uttar Pradesh. They had walked for seven days, would stay seven days, and then walk home again. I asked them why they had come and their immediate response was “to bathe in the Ganga.” And I got the same answer from a university president, who urged me to take my “holy dip” in the “ambrosia time of sunrise.”

The 2013 Kumbha Mela was a “maha” or great Kumbh 144 years or 12 X 12 since the last. Behind this remarkable gathering lies the legendary event of the “Churning of the Oceans” at creation. There are many versions of this event. One of them says that churning brought forth many things including a purple horse, my favourite, and a pitcher containing the “nectar of immortality.” It created such a mess – all beings clamoring for it – that it was returned to the heavens by Mohini but not before four drops fell on the earth. One of those drops fell here at the confluence of these holy rivers. And the ritual dip in these holy waters strengthens and renews the devotee on the journey to moksha or liberation. 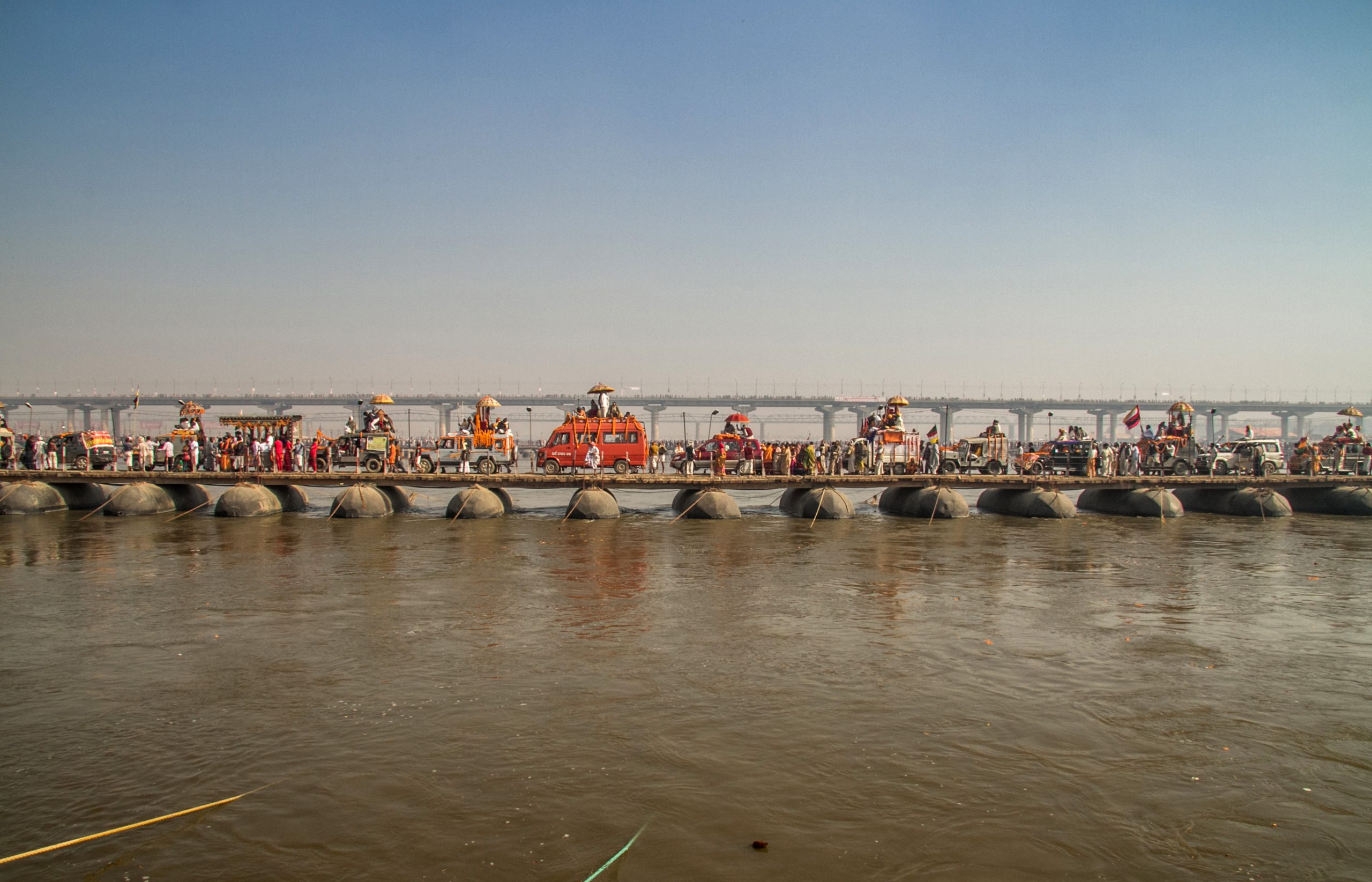 Eighteen temporary pontoon bridges and 156 km of road were built for people and vehicles to make their way to the Kumbh. Photo by Kris G Hariharan

Most commentators characterize the holy dip as washing away “sin,” but this is not the language of the Hindu.

The logistics behind this event are formidable. The reason is that the tent city constructed for the Kumbh is located on a flood plain that is annually under several metres of flood water. The government of Uttar Pradesh is responsible for laying out the temporary city. It is usually a 30-day affair, but in 2013 it was 55 days. Eighteen temporary pontoon bridges crossed the Ganges and Yamuna rivers. There were 550 kilometres of pipelines, 770 km of electrical lines, 40 hospitals/clinics (allopathic, homeopathic and ayurvedic), and 156 km of road – many with five-metre-wide metal plates laid down on the sand for vehicles.  There were 30 fire stations and 30 police stations – mostly to assist pilgrims who have become separated from others from their village – and 30 fire station. During any given Kumbh Mela, there are hundreds of workers daily clearing “the shitting fields.” At the end, the city is dismantled – electric lines, water lines, pontoon bridges, etc., removed. Later, flood waters, which rise almost up to the base of the high permanent bridges, wash the entire area during the monsoon season. 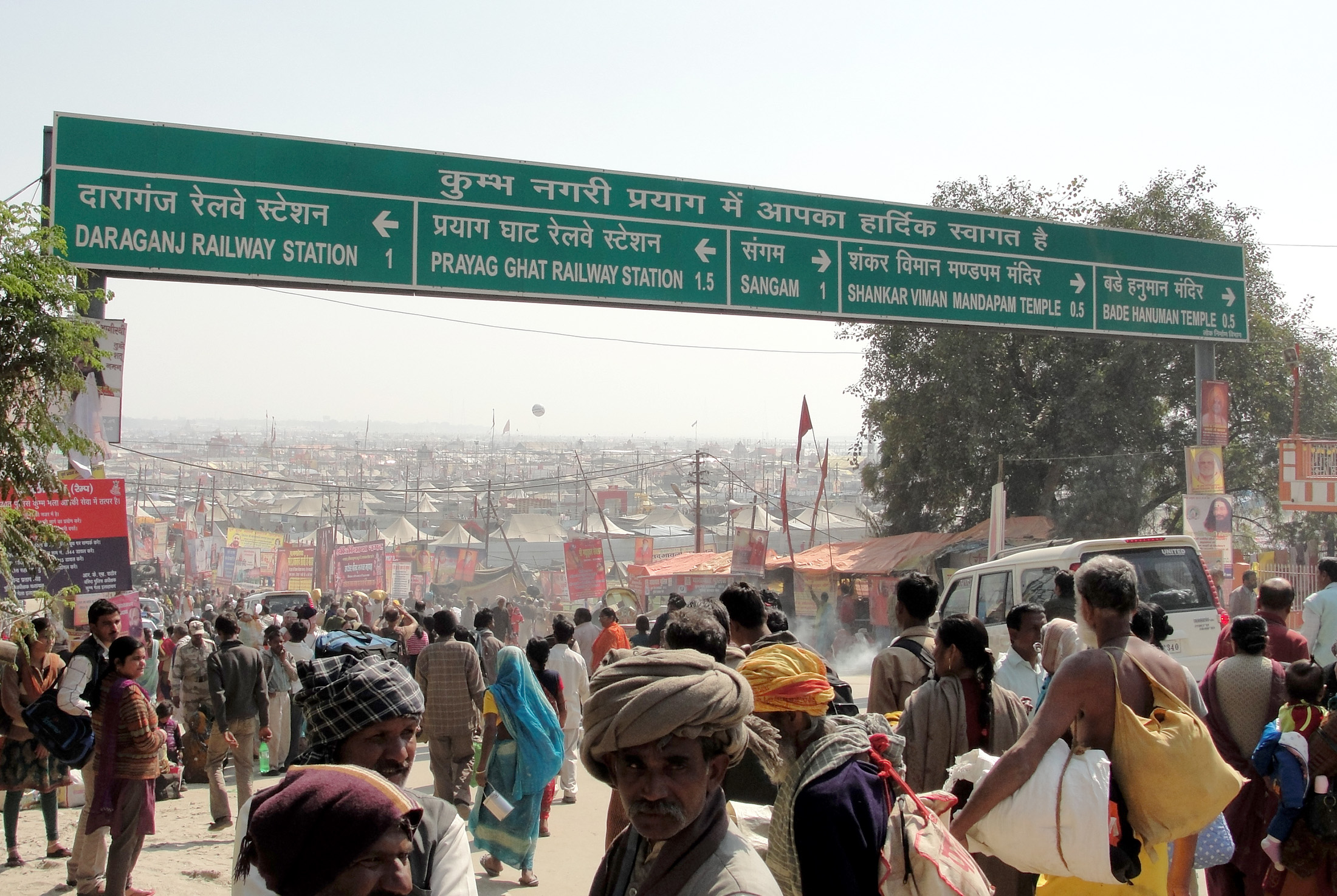 I arrived at the Allahabad train station and walked much of the way to the Kumbh. You arrive on a ridge and look down on a huge tent city below. It is remarkably colourful with many tents of varying colours and flags flying over the sites erected by various Hindu communities or around a particular Guru or teacher. You see an endless stream of pilgrims crossing the pontoon bridges, many of them carrying bundles on their heads. The bundles contain bedding, clothing, rice and food for the days ahead, colourful saris. There are people of all ages.

The army-coloured tents are erected by the government, but many prefer to stay in compounds of their brand of Hinduism and with their gurus. I had been invited to stay in the Goswami compound that was always on the northern edge of the Kumbha Mela. I liked this setting as it was somewhat quieter/calmer than the centre where, like a fair midway, you are bombarded with loud enticements to come and hear this or that guru/teacher, or sing bhajans, or watch a play portraying the epics of Hinduism. There were also those selling bangles, malas (prayer beads) and all kinds of images of Hindu gods and goddesses. You could also buy shawls and cloth and a cup of tea at the vendor stalls.

When I first went to India in 1986, it was Acharya Shrivatsa Goswami who told me about the Kumbha Mela. I was shocked to realize that I had been engaged in the study of religion for 25 years and never heard of it. When I came back to Canada, I found one sentence about it in Ninian Smart’s Religious Experience of Mankind (1969). Goswami comes from a distinguished Hindu family in Vrindaban, the heartland of Krishna/Radha devotion in North India. The family has been attending the Kumbha Mela for centuries. Around 40 devotees, guests and family in attendance each time I went. In their compound there is daily puja/worship to Krishna and Radha, meditation, discourse by members of the Goswami family, and some singing and dancing. We had all our meals there, served on a banana leaf and/or in woven dishes, wholly biodegradable. In 1989, they served a noon meal to 100 sadhus – the wandering ascetics who typically have one piece of cloth and a brass cup for drinking. They also gave each of them a donation. 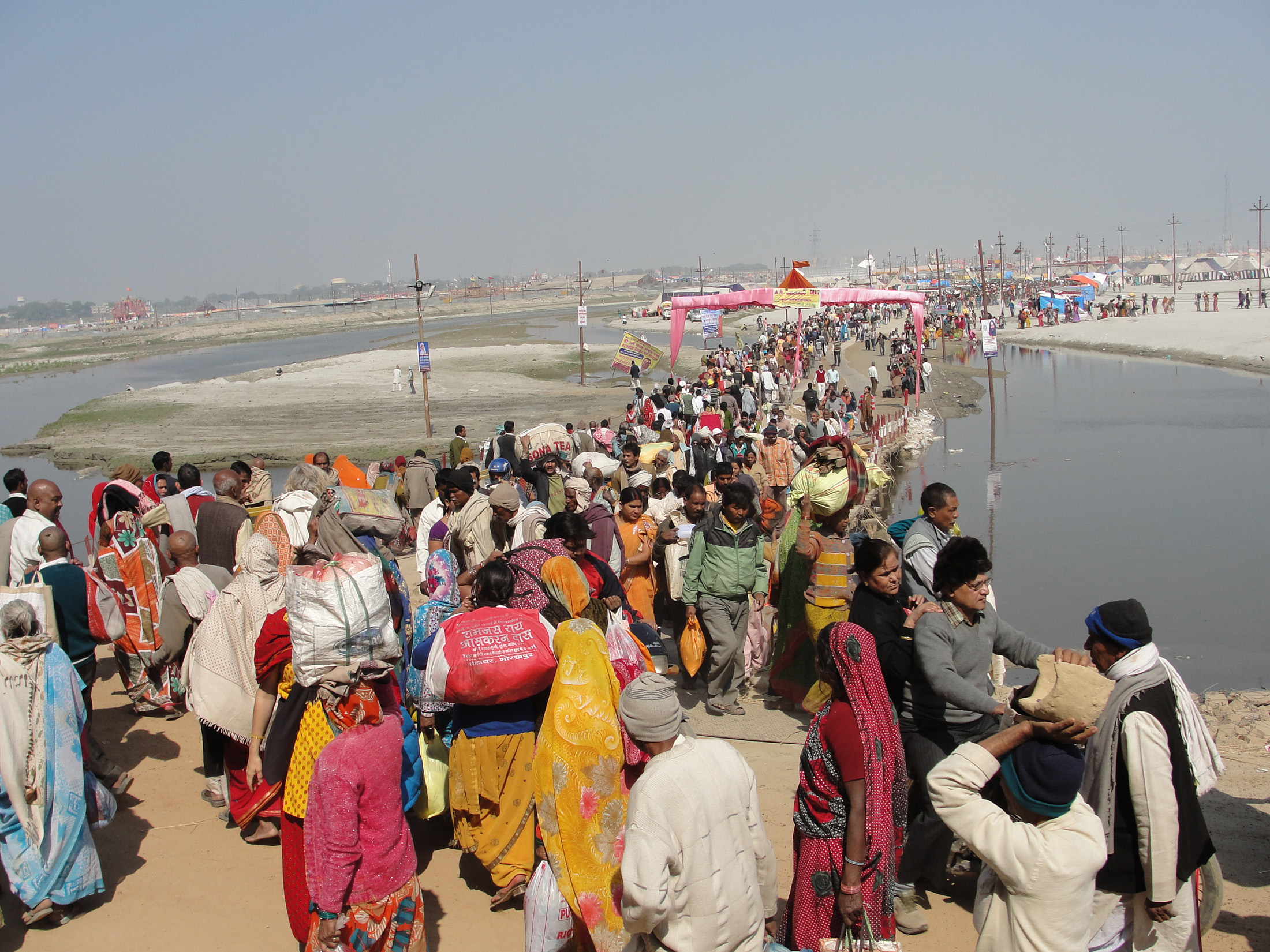 Endless streams of pilgrims carry bundles of bedding, clothing, and food for the days ahead. When it’s all over, the tents, pipelines, hospitals, electrical lines – and people will be gone. The 1.6-km-wide sandy floodplain will be bare. Photo by Darrol Bryant

Every day I spent time wandering about the Kumbha Mela. Most often I headed for the river to watch the endless cycle of people coming to the river, making offerings, performing little rituals, and taking their holy dip. The devotion was palpable. Small offerings of flowers, sticks of incense and prayers were offered to the river. Jugs were filled with holy water from the Ganga to be taken back to their villages. I struggled to see the flowing water as they saw it. I wrote in my diary:

The pilgrims, nameless and numberless, were making their way to the waters, entering those waters, then returning … and making their way to those countless places they had come from. Had they been renewed? Cleansed? Purified? Strengthened on their road to moksha or liberation? I could not judge, I could only wonder. …

The pulse of the Kumbh intensifies as the most auspicious day approaches. It was on February 10 in 2013. It is the day everyone has been waiting for. Like everyone else, I rose at 3:00 am to begin the trek to the sangam, the meeting place of the rivers. It is here that everyone wants to take their holy dip. In 2013, we walked out into a dense fog. We crossed a pontoon bridge and joined the flow of others making their way. We stopped for chai. In 1989, I was able to climb into a media tower that gave me a great view of the sangam.

I later wrote in my diary:

Off to the east, the bright ball of the sun inched up the horizon and a roar went up from the crowd: the human world rose up to greet the sun that spreads its crimson rays on the new day. As the sun rose, one could feel the mounting energies. A rush of joy seemed to ripple through the surging crowds. And the sunrise was beautiful: that ball of flaming red rose through the dust and haze like a jewel to refract its light on all. It revealed a humanity that spread as far as I could see along the banks of the rivers and beyond. And, for a moment, the moving waters and the ebb and flow of the humanity gathered there seemed to dance with one another in perfect harmony as the sun rose over it all. 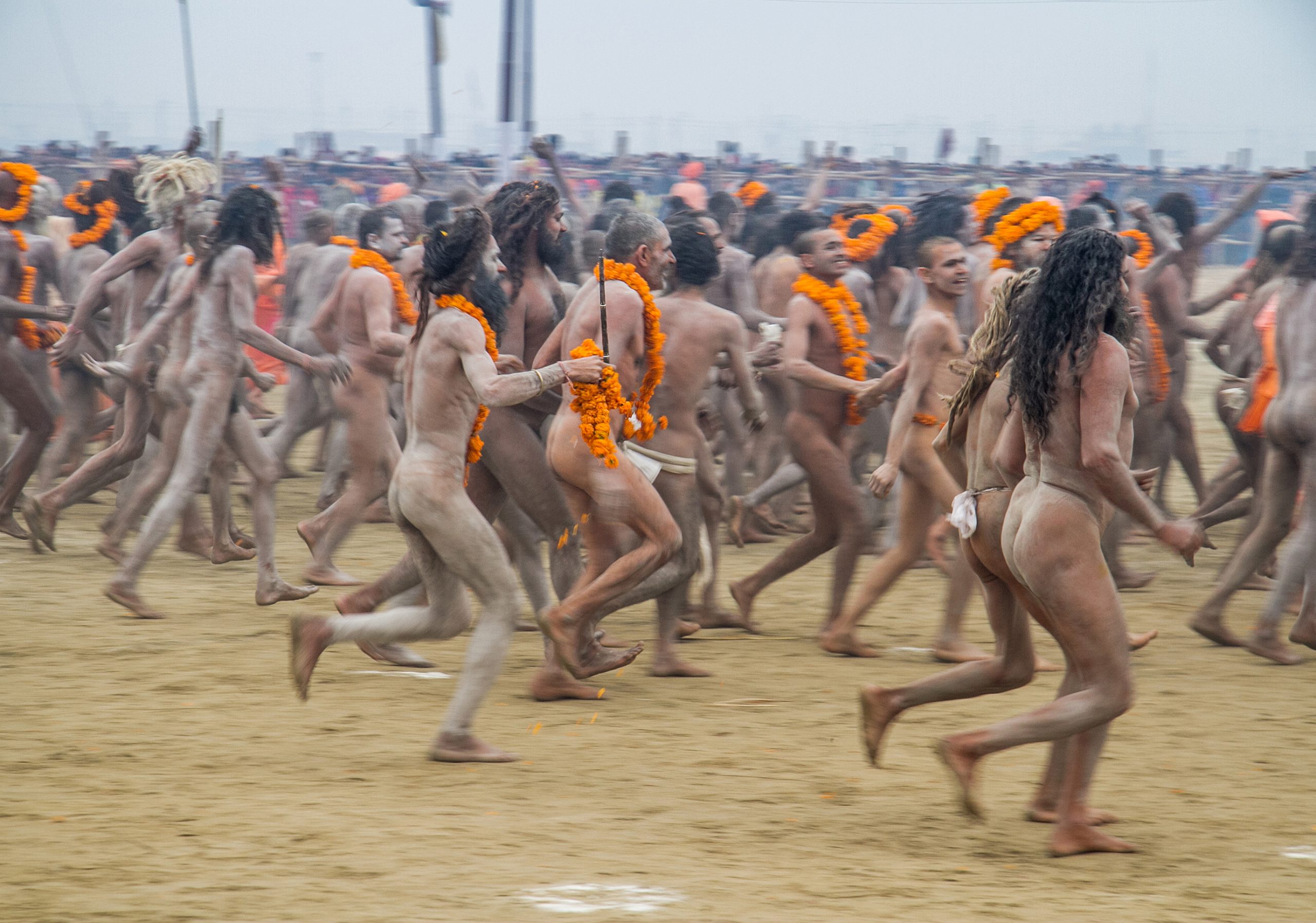 February 10, 2013 was the most auspicious day. The naked sadhus, many covered in holy ash, were first to enter the transforming waters. Photo by Kris G Hariharan

As always, the naked sadhus were the first to enter the transforming waters. Many were covered with holy ash. One group of sadhus carried flashing swords. There was a fenced-off area down the center of the sangam where the sadhus and then the heads of communities were lined up. Outside that area, the other 29 million were making their way into and out of the water. These were the villagers, the pilgrims from across India. They, rather than the naked sadhus, were the real story of this event.

I wrote in my diary when I returned to the Goswami compound:

… I made my way to the river for my final farewells. I felt I wanted to be at the river one last time, to see once again the cycle of pilgrims coming to and from the river, performing their acts of devotion continuing the rhythms that mark this extraordinary event.

I can see that Mother Ganga is more than just another river. It is the living presence of the mystery of life’s origins and continuities as it ceaselessly flows towards its destiny. It is moving to watch the reverence with which it is approached, entered, and acknowledged through time-honoured rituals. The river is, as it were, an endlessly flowing symbol of transformation that renews as it cleanses, that transforms as it receives. For the pilgrim, it seems to have a power, presence, and a persona that is difficult for me to grasp, though I can glimpse it in their acts of devotion. And I find it very moving. There is even a moment when I fell caught up in the archetypal drama as the endless round of pilgrims meet and enter its endless flowing waters. But then it draws away”.

It is not only the largest gathering to take place on our planet but also one of the most remarkable. 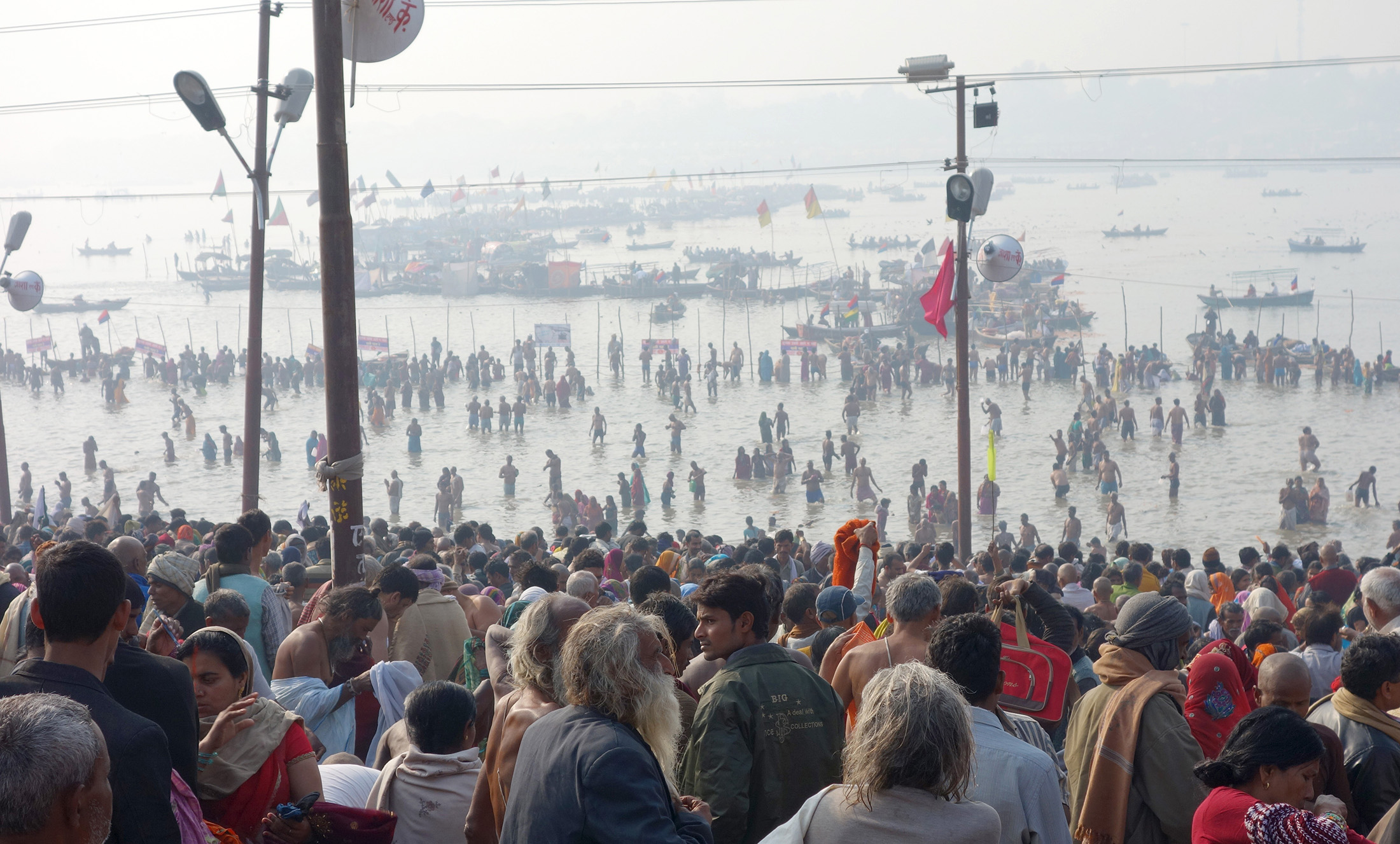 After the sudhus, and after the heads of communities, the other 29 million people make their way into and out of the water. Photo by Ben Bryant

Darrol Bryant is a professor emeritus from Religious Studies in Rennison College University, Waterloo. He is also director of the Centre for Dialogue and Spirituality in the World’s Religions.

Some of the photos with this article are by Kris G Hariharan. Read A\J’s interview with Hariharan.

Darrol Bryant is a professor emeritus from Religious Studies in Rennison College University, Waterloo. He is also director of the Centre for Dialogue and Spirituality in the World’s Religions.