Wayne Roberts, a hero to many in Canada’s food-security movements and the broader environmental community, passed away on January 20, 2021 after a hard-fought battle with an aggressive form of leukemia. He was 76. Wayne is survived by his wife and collaborator, Dr. Lori Stahlbrand, and children, Anika Roberts-Stahlbrand and Jaime Kirzner-Roberts.

There’s nothing funny in the above paragraph. Which is ironic given that no one here at Alternatives Journal (A\J) who had the pleasure of working with (or even just meeting with) Wayne went away without smiling. The subject matters that interested Wayne most were also important and very serious matters, yet our team members first recall the witty headline suggestions and the self-deprecating asides. Don’t get us wrong; the deep ponderings and unique perspectives that Wayne shared with our readers in A\J issues throughout the years were always a feast of food-for-thoughts. You don’t become an ’eminence gris’ without earning the accolades, which Wayne did as individual Canadians, government officials, leading corporations and impactful charitable organizations came to appreciate Wayne’s persistent advocacy for more secure food systems to benefit all Canadians. 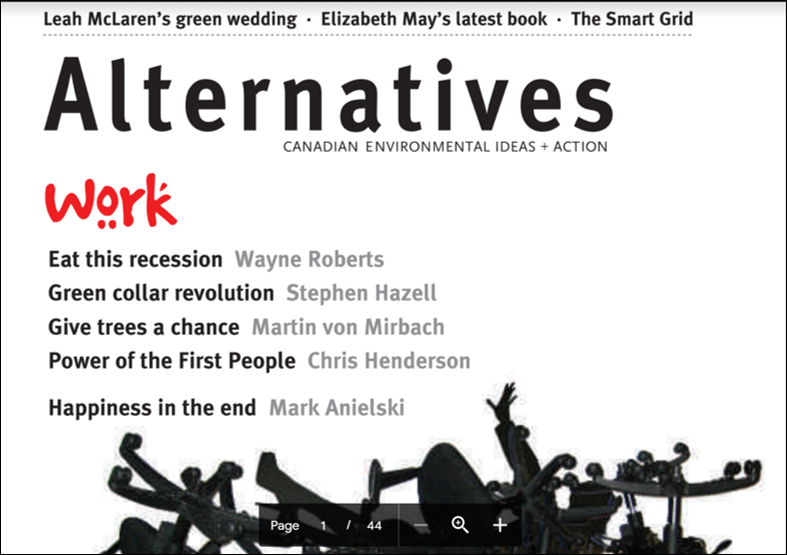 We all – all Canadians – have benefited from Wayne’s insights and ideas as they’ve shaped policy and planted the seeds for more meaningful actions to ensure that access to affordable and healthy food choices are available to each and everyone of us.

“When someone in Toronto goes to a farmers’ market or they harvest from a community garden or they see that their local grocery store has more local food in it — Wayne played a vital role in making that happen,” Mike Schreiner, Guelph MPP and Green Party of Ontario leader said.

“He is the godfather of good food policy for Canada for the things that he contributed to food policy in Toronto and Canada at large,” mentioned Anan Lololi, executive director of Afri-Can FoodBasket.

And, as mentioned, we were fortunate to have Wayne share his wisdom and witticisms with our readers on a frequent basis, starting in the mid-00s. His frequent collaborator on our side is long-timer A\Jer and our Publisher Emerita, Marcia Ruby. Marcia shared her thoughts with as as she reflected on Wayne’s involvment and impact our our own work – and the legendary legacy he leaves for others to follow.

In early 2000s, Wayne reached out to A/J to ensconce the idea of food sovereignty in food conversation and policy (29:4, 2003). Food issues have been one of the most popular issue themes here at Alternatives, performing the best on newsstands, and referred to by researchers and activists.

Three years later, for the same reason, Wayne led the editorial charge to scale up on Canada’s food security measures. (32:3) 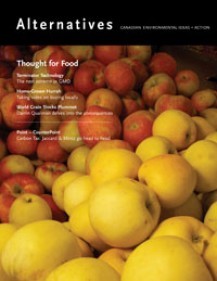 had many conversations with Wayne apart from his issues and articles. He was generous in contributing advice and strategy for Alternatives, quite separate from editorial. He was a connector– sometimes he’d refer writers working on cutting edge research to me and I’d often refer budding food activist students to Wayne. Not many months would pass without an email exchange or two.

Wayne would always add a special splash to any line of copy, including this, the last line in the editorial for Food Securtiy:

Welcome to food sovereignty: crisp and eager, with a note of the commons, an undertone of nature, a good nose and a sharp finish.

We were very fortunate in 2007 when Wayne agreed to join the A\J’s editorial board, the roundtable of luminaries who help shape issue themes and story ideas. Not a Food issue went by that Wayne did not contribute to. One of the memorable articles was “Eat This Recession” (35:6, 2009) where Wayne crunched a bunch of numbers to show the virtuous results of several approaches including green roofs and a four-day work week. It was so thick with numbers that our editor, Nicola Ross, was compelled to send it to several referees. She had so many opposing views that she wrote a little intro, shared these views and invited others to offer theirs. And I summarized these scenarios by working with an artist to create diagrams of each. One of the higher maintenance but rewarding things I’ve done at A\J. It was a lot to chew and pretty popular.

I sent him this note this past Sunday.

You are one inspiring man, Mr. Roberts! Thank you for the years of guidance and for all of your contributions to the food movement – in Alternatives and the ocean of other initiatives and thinking that you have created over the years. So much of your generous and sage advice came my way (always delivered in good humor and your infectious giggle, hence, whenever I think of you, I see your face and your great big grin).

Wayne, I’ve got to say, you get the prize for most innovative and entertaining writing on food in Alternatives! “Digest This!” “Eat This Recession” and “Eating Insects: Waiter, There’s no Fly in My Soup” to name but a few.

Wayne’s contribution, Eat This Recession, in a 2009 issue of Alternatives Journal (A\J)

Wayne had the best laugh and the most positive outlook. So smart and he came up with what I think was the best article title during my tenure. On his article about eating insects, the title was “Waiter, there’s no Fly in my Soup.” 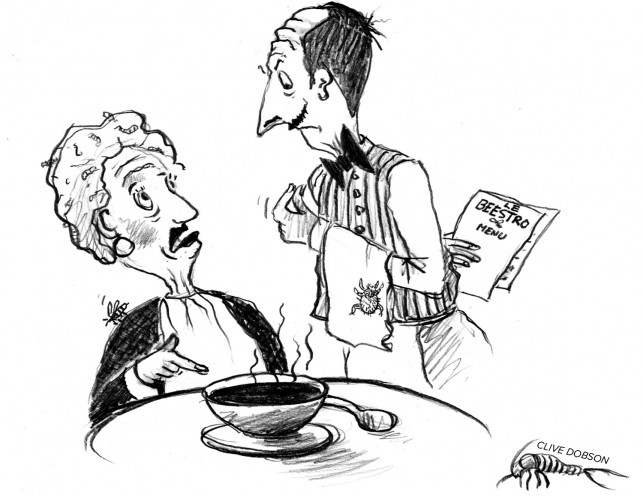 Wayne most recently wrote for us in 2017, contributing Radical Food Resistance to our, you guessed it, FOOD issue that year. You can read it yourself – actually, you really should – as he started the article as follows:

Indeed, few social movements can claim as impressive a list of accomplishments as food movements, advances made almost entirely through the efforts of young volunteers, poorly paid employees of grassroots groups and mindful shoppers.

As an organization dedicated to crafting and delivering entertaining and enlightening environmental storytelling, we always knew we could count on Wayne to lift our spirits and expand our mental horizons. We were so very fortunate to have shared those stories with you, our readers, as it gave us an opportunity to meet the man himself. And, as you can read from the above anecdotes and special notes, we are so profoundly grateful for that opportunity.