On this National Indigenous People’s Day, June 21st, 2019, the Greenbelt Foundation and Alternatives Journal are pleased to announce the first look of the Moccasin Identifie

On this National Indigenous People’s Day, June 21st, 2019, the Greenbelt Foundation and Alternatives Journal are pleased to announce the first look of the Moccasin Identifier Project (MIP) school toolkit!

A\J had the exciting opportunity to interview the project’s founder, Carolyn King, about the project and her goals this past March.

As former chief of Mississaugas of the credit First Nation, and the first woman ever elected as their chief, Carolyn King is the visionary behind the Moccasin Identifier project and a force to be reckoned with. She held office from 1997-99 and has over 25 years experience working in communities, collaborating with universities, government agencies and community organizations to give a voice to Indigenous and First Nations communities. She is currently on the road, showcasing the Moccasin Identifier project, which aims to educate people about the history of Indigenous peoples’ traditional territories, and help people recognize and honour places of significance.

The idea is simple, but impactful. An image of a moccasin is stencilled on the ground in places of significance to Indigenous Peoples. Because the paint and stencils wash away, Carolyn sees an opportunity to turn the stencilling into an annual event in schools in Ontario, as a continuous reminder of traditional land. The unique stencilled designs of Moccasins and washaway paint represent those that have come and gone but ‘left no mark’. One day she hopes to grow the project nationally in the hopes that not just Ontario, but all of Canada will be covered in moccasins, to remind us of the mark we and others leave on the land. I had the opportunity to discuss the project with Carolyn in person: this is the conversation we had.

This interview has been edited for clarity and length.

A\J: What is the Moccasin identifier project and how did it come to be?

CK: The Moccasin Identifier was born out of a digital mapping project, where communities would mark their sites of significance, and tell their stories.

[shows mapping app on her phone with various dots across Ontario]

CK: This is Toronto here, and if you tap on a dot, something will come up.

CK: There you will see a video; which shows Mississaugas of the New Credit land claim to Toronto. So, if you were to go walking around you could download the app and have it tell you the story of this building for instance, its history. So we were working on that and then the project ended. For our treaty lands and territory we were going to mark significant sites, so if developers or municipalities wanted to use the land for development, we would be able to tell them why that site was important to us and why they shouldn’t do it, or why and how it should be adapted to meet our needs. So from the digital dot it changed to the stencilling program.

A\J : So down the road this could turn into an augmented reality project?

CK: Yeah! So the idea is, in Ontario with funding from the Greenbelt Foundation, we will research and collect information about different sites within the Greenbelt. So that in the future we will be able to tell them what is important on these sites, such as a trail, or burial site, or a campsite. The educational component involves developing an educational kit that would have the stencils in there. There’s lots of history, and lots of talking to do about this idea. 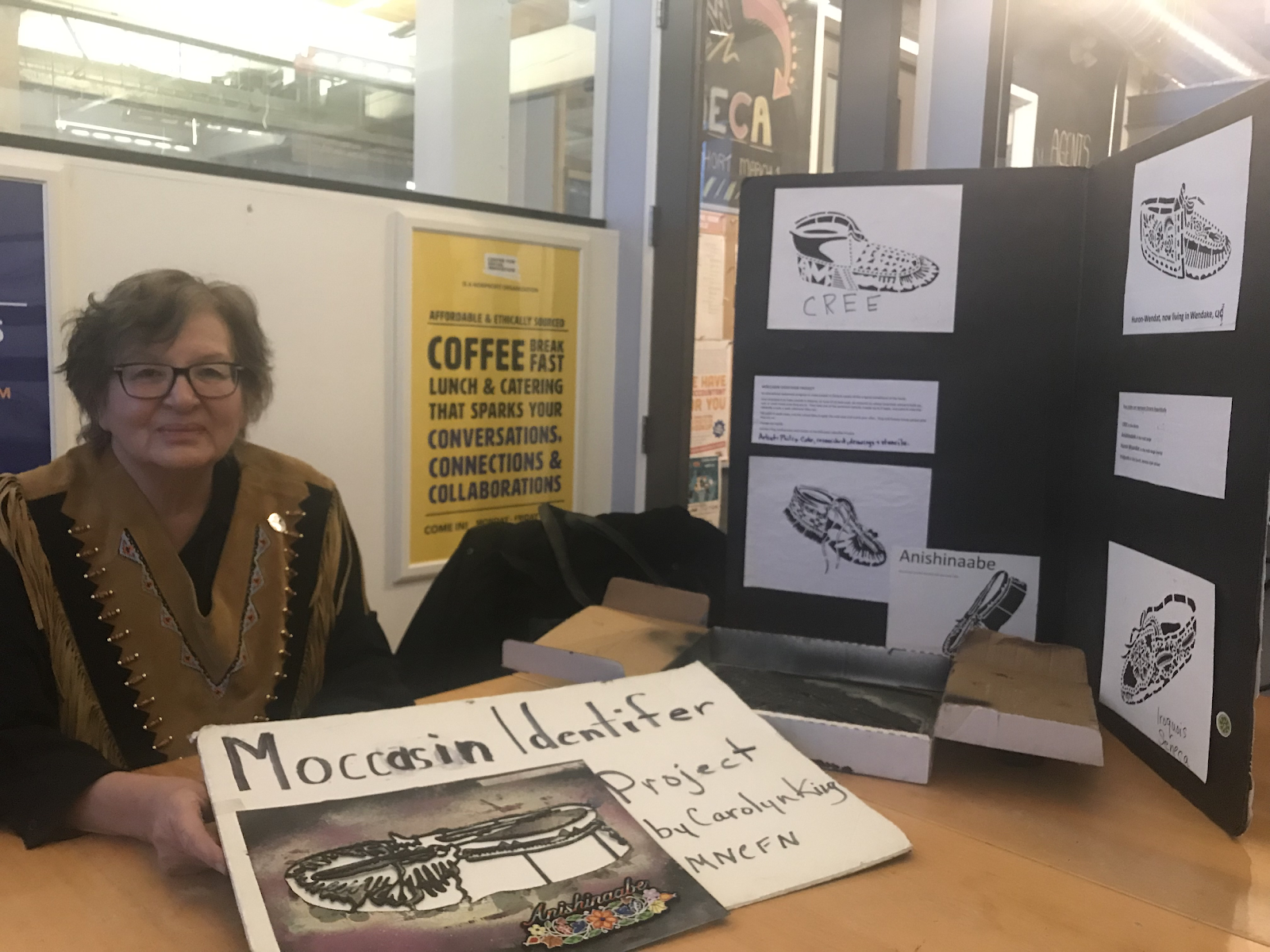 A\J: What has been the response so far?

CK: Amazing, we’ve had a 200 percent response. Coming from the digital dot project to researching which marker we should put on the ground to physically identify places of significance, brought us to this. So, I do a talk, called the Moccasin Identifier and we were presenting our work at our annual historical gathering. We were presenting how we would mark the spot where one of our members lived, and how important she was to our history. Then someone in the audience asked, “If I went to one of these spots, what would I see?” and I responded, “Probably nothing”. Someone else said “What if I didn’t have a phone, let alone a smartphone, to go talk to that digital information”. And the response was that maybe we should have a marker, or some kind of plaquing system to physically mark the spot. So we came up with the idea of using the Moccasin symbol.

At that meeting, people said “We have a meeting with the ministry next week, and you need to have a symbol — a unique identifier.” We needed something that would physically mark our places of significance and represent us. I said, “What should it be?”, and the discussion was that it should be an eagle feather. I said no, that’s too sacred to have on the ground for people to walk all over and not know anything about it.

They also discussed the wolf, the deer and I said no, same thing, they are too important. It’s not for people to have them on the ground, and walk on them without understanding the importance. So they said Carolyn, come up with something, you’ve got to come up with something. So I wrote on my white board “What will identify us and link us to the land?” I read that for three days but it shouldn’t have taken me three days. Everyday I read it and said “What is it?” and on the third day, I said it’s our footwear! And the idea was born. Then the idea moved to what kind of footwear. We partnered with the Bata Shoe Museum. They gave us full access to their collection of Indigenous footwear. Philip Cote helped us research the whole process from the real thing down to the stencil.

It was the meeting with the minister which actually changed us to focus on the whole of Ontario, because otherwise we’re just focusing on us, [the Mississaugas of the New Credit]. We’re the treaty holders of this land and the area around the lakes but the suggestion from the Ministry was that we should have more support from the First Nations of Ontario than just us.

We got full support from the First Nations, and so we took it out on the road. We made more stencils and now we have more success from the Greenbelt funding that will allow us to develop the marketing and branding of this initiative. We really believe this project is going to be able to cover the whole of Ontario.

AM: Do you plan to take this across Canada?

CK: Yeah. So our focus right now is to identify sites in the Greenbelt. But our focus as First Nations is the entire area, and Toronto isn’t in the Greenbelt, the Greenbelt is around it. So we’re continuing to do that and the momentum is getting bigger and bigger. Last year I visited around 800 kids at 8 different schools and they love it! We went to Toronto Island last year, as part of a relationship building initiative, in May we did the flag raising, then we did a history talk in September, and then October 14th we stencilled the Moccasin Identifier. We had a great time, it’s great for families!

Come June 21st, when the project is launched, the schools and classrooms of this province will research whose land their school is built on, and then take a stencil with some paint and they spray or use chalk paint and stencil out [the moccasin], it’s as simple as that. Then we move on and we create footprints… So they have a history lesson, they do the research and then they do the stencilling to mark the recognition. I think it will educate and change the world, starting with the kids.

AM: How do you create the ‘penny drop’ moment in people’s minds?

CK: First we tell them about the project, then they do the research, stencil the moccasin, and they pick up the stencil… and in the reveal, they stop! I find that the reveal is the big thing because they always want to keep doing more, and they leave footprints across the ground. People want to continue because it’s non threatening.

You can find out more about the Moccasin Identifier Project here: http://mncfn.ca/mncfnevent/the-moccasin-identifier-project/

Adam is a journalist in residence with Alternatives Journal, and Master of Climate Change student at the University of Waterloo. He is part of the TRANSFORM project based out of UW’s SPROUT lab which seeks to understand the role of small to medium size businesses in climate governance and how we can accelerate their transition to low-carbon.