Working in the environmental field is an uphill battle. Oftentimes it can feel like we will forever be the underdogs and always fighting against a stronger, wealthier, or more powerful force. These feelings have led many of us to resort to drastic measures to ensure our voices will be heard. And I get it, shock the system! Believe me, I really get it. But sometimes, those drastic measures we choose to take can backfire.

Working in the environmental field is an uphill battle. Oftentimes it can feel like we will forever be the underdogs and always fighting against a stronger, wealthier, or more powerful force. These feelings have led many of us to resort to drastic measures to ensure our voices will be heard. And I get it, shock the system! Believe me, I really get it. But sometimes, those drastic measures we choose to take can backfire.

Take PETA (People for the Ethical Treatment of Animals) for example. PETA has been advocating for animal rights since 1980. In doing so, PETA tackles important issues such as factory farming, climate change, and sustainability. Today, PETA is best known for their radical protests and demonstrations, including locking themselves in cages, pretending to be skinned alive, or protesting in the nude. While these kinds of marketing tactics are memorable, they leave a bad taste in your mouth when you think of PETA.

One of PETA’s most outrageous marketing tactics, in my opinion, is their over-sexualization of women to support their causes. I remember an ad they tried to run back in 2010 which showed young women having “sexual interactions” with vegetables…. So yeah.

Men are less likely to support animal rights than women, so in some ways it seems logical that PETA decided to give the ‘sex sells’ approach a try. And while these campaigns are rooted in good intentions (eating less meat to reduce our emissions, boycotting a horrendous fur industry), leveraging female sexuality to stupefy and add shock value takes away from the very thing they are trying to accomplish.

First off, research has shown that these kind of marketing techniques simply do not work. In 2013, researchers from Australia conducted a study to better understand the relationship between using sexual images of women, and the level of support received for the (PETA) campaign. The most shocking result of the study found that this dehumanization of women promotes rape culture. More specifically, “women’s dehumanization is associated with increased tolerance for unethical behavior towards women, specifically men’s attitudes towards sexual harassment and rape…Men who dehumanize women by associating them with animals or objects are more likely to sexually harass women and have a higher rape propensity.” In conclusion, the study confirmed this kind of advertising reduces “both intentions to support the ethical organization and behavior helpful to the animal-rights cause.”

Secondly, how am I, a female working in environmental sciences and animal rights, expected to be taken seriously now? Women who work in policy and STEM (Science, technology, engineering, and math) are going to be heavily involved in solving some of the very problems that fuel PETA’s existence. Yet, “Women working in STEM are more likely than their male counterparts to regard sexual harassment as at least a small problem in their workplace.” PETA’s sexualized campaigns dishonor these women and the progress they have made in advocating for sustainability, animals rights, and global health.

Historically, solving environmental problems such as climate change has been viewed as ‘women’s work’. The Guardian recently discussed how eco-products are most often targeted towards women, “where green branding might as well be pink.” This concept is also known as the eco-gender gap, and in doing so, advertisers communicate that sustainability and environmental actions as a female responsibility.

Women around the world are overburdened with the responsibility of solving our environmental problems, while simultaneously being more affected by them. PETA’s use of women as marketing propaganda now feels mildly repulsive, leaving one wondering who approved this ad campaign in the first place.

PETA is well aware of the allegations made against them. If you visit the FAQ section of their website (after reading this article, of course), you’ll see that PETA attempts to sidestep the question of why use sexual-exploitation-for-a-cause as a marketing tactic:

“Why does PETA sometimes use nudity in its campaigns?”. To which they say, “PETA knows that provocative, attention-grabbing actions are sometimes necessary to get people talking about issues that they would otherwise prefer not to think about.” They then go on to compare PETA protesters to Lady Godiva.

In 2010, PETA President, Ingrid Newkirk, publicly responded to some of these criticisms in the Guardian. She wrote, “As for the sexy women in our ads, the silly costumes, the street tableaux and the tofu sandwich give-aways, in a world where people want to smile, can’t resist looking at an attractive image and are up for a free meal, if such harmless antics will allow one individual to reconsider their own role in exploiting animals, how can it be faulted?” 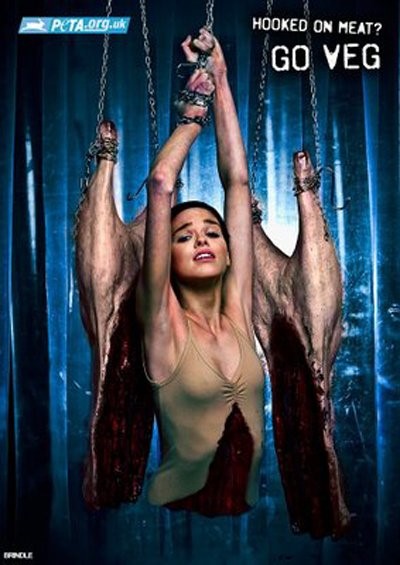 I don’t know about you, but I am certainly not smiling.

Don’t even get me started on the fact that the body shapes preferred by PETA are not inclusive and embracing of a full tableau of beauty-norms.

The marketing tactics discussed in this story are an unethical way to promote an ethical cause. PETA started because they wanted to help animals who could not speak for themselves. Their very existence is grounded in doing so much good, and they are trying to tackle very real problems, but their voice has become undermined by some extremely poor decisions.