Imagine standing on a street corner in a Canadian city in the middle of February, and every wall that surrounds you is covered in a bright, colourful painting. Vibrant images reflect our diverse culture and relationships with nature. Imagine walking past these illustrations every morning as you start your day. You probably wouldn’t care as much that the wind is whipping at your cheeks, or that the ground is covered in brown slush, because you would always be looking up, anticipating more colour as you go.

Imagine standing on a street corner in a Canadian city in the middle of February, and every wall that surrounds you is covered in a bright, colourful painting. Vibrant images reflect our diverse culture and relationships with nature. Imagine walking past these illustrations every morning as you start your day. You probably wouldn’t care as much that the wind is whipping at your cheeks, or that the ground is covered in brown slush, because you would always be looking up, anticipating more colour as you go.

You will find murals in other cities – and some are celebrating the muralism movement with events. The Vancouver Mural Festival happened this past August and brought together 35 new murals, 20 artists and plenty of music and local business to celebrate. Waterloo Region’s own Cambridge International Street Art Festival happens in August as well.

In the US, Philadelphia has implemented a city-wide mural program, supported by a network of artists and volunteers, to beautify its downtown core. Detroit artists are using all forms of public art, including murals, to engage community members in the city’s revitalization.

But there is also something just a little different bubbling in Waterloo Region. In a tiny creative studio, in a former Kitchener factory space, visual artist Pamela Rojas is surrounded by colourful canvases large and small, sculptures and other creations in preparation for her next exhibit. What you cannot see are the murals that she has created around the community, although if you look hard enough, there are small-scale models and sketches for some. The stories behind these murals demonstrate a new level of artistic civic engagement and have sparked the creation of the Pomegranate Mural Collective. More about that later.

Rojas grew up in Santiago, Chile where people, politics and murals intertwined to reflect the stories of Santiago’s history, turmoil and celebration. In Chile, participating in mural painting equates to civic engagement. As a young adult, Rojas moved to Spain and studied at the prestigious Della Robbia in Seville, specializing in sculpture and ceramics. Later in 1996, she worked in Seville as an assistant to muralist Ximena Ahumada de Avila, also originally from Chile.

The objectives are simple. Involve artists, engage other members of the community, and colour up this town!”

Ahumada shared stories of times when political turmoil would spark mural collectives to form and take action. Rojas recounts, “She had to paint in the night, clandestinely. She would have one part of the mural to do. They had an organized collective, so a few guys drawing, another group colouring, and another do the retouch – the black lines.” The murals had to be completed in the dark in one night.

Rojas moved to Canada in 2005, landing a settlement work position at Kitchener’s Reception House, helping newcomers settle in the community. Reception House assists families of many languages, and you can just imagine how physically and culturally disoriented many would be as they try to settle in their new community. “For a few of the newcomer children, it was their first time having an art class. They were a blank canvas. I got to teach them to mix colours and apply paint.”

Now, on some evenings during the week, you’ll find Rojas working with children and youth at The Family Centre, which is the newest addition to Family and Children’s Services of the Waterloo Region. Let’s just say that since Rojas met their acquaintance, the white walls in the halls are starting to fill with colour, pictoral story, and even some youthful portraits. They are muralizing the halls, one session at a time, but the influence and effects go deeper on a personal level. “When we started creating the mural, at first the kids were scared, like ‘I can’t do that,’ but once we finished, their ownership and pride is high, because they’ve completed something huge and they understand the concept of teamwork. Each kid has different personalities, and so I’ve found which of their traits or strengths can best add to the creation of the mural.”

Wanting to bring that same personal transformational power of art to a community level, Rojas collaborated earlier this year with Eric Van Giessen, a street art enthusiast and master’s candidate in Social Justice and Community Engagement, to create the Pomegranate Collective. “We called it Pomegranate because the fruit inside is like little pieces. All of us can be represented by that,” Rojas says. ”I am the artistic director. Eric is this creative administrator.” 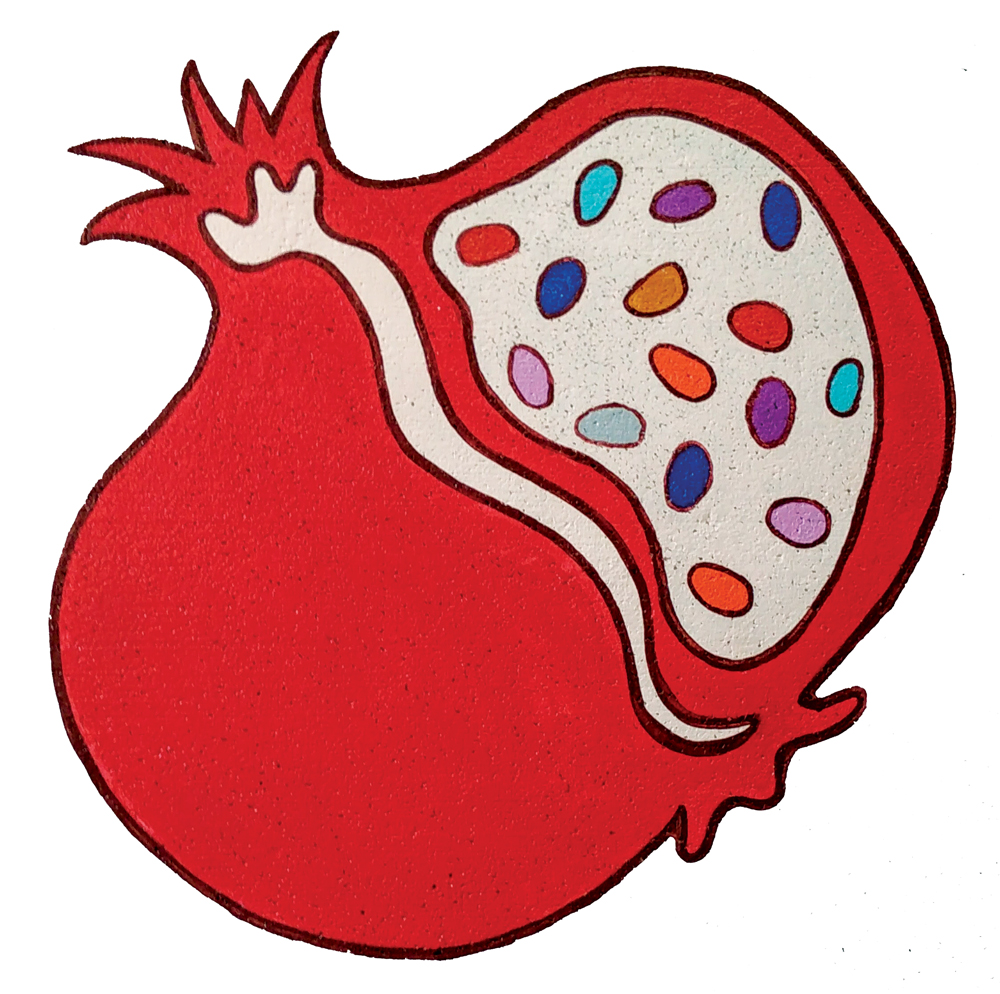 The logo for the Pomegranate Mural Collective. Photo courtesy of Pamela Rojas.

The objectives are simple. Involve artists, engage other members of the community, and colour up this town! But the full intentions are yet to be realized. Rojas shares her vision “In the future when we have more people to join us, we can have different committees inside the collective. And we can have more artists helping to design the murals. I want the fusion between my mural and another. I want to see that – how two artists, or three or four can work in partnership.”

Van Giessen explains that “Community is central to this collective. Our hope is that people will say, ‘if I want Kitchener to be this sort of place, then I need to step up and make that happen.”

Rojas makes the painting process easy for community members with little or no experience. Community murals are simple in design, and Rojas maps out every colour and shape, like a giant paint by numbers. “When you do it with guidance you are not set to fail.”

Pomegranate welcomes other skills as well. For example, volunteers can apply to help with the collective’s social media efforts.

Forming collectives around artistic initiatives can increase efficiency (more heads are better than one) and inspire a sense of belonging and connection to care for community. The Pomegranate Mural Collective intends to blanket the Region of Waterloo in colour by uniting artists and community members. At the heart is diversity and togetherness.

The collective’s next project is a mural for the Welcome Home Refugee Housing Community in Waterloo Region. Rojas brings her experience as an immigrant to this project.

Now imagine yourself as a recent newcomer to Canada, standing at an intersection of a Canadian city in February, and every wall that surrounds you is covered in a bright, colourful painting. And when you discover that you are welcome to join in with other creations like this, just imagine how that will make you feel valued, more connected to this new community – like you belong.