Suzy Amis Cameron is a dynamo. With a successful acting and modeling career already under her belt, she is taking on even more roles. She is a global environmental activist, founding director of the ecoconscious MUSE schools, mom to four children and wife to megadirector James Cameron (Avatar, Titanic).

Suzy Amis Cameron is a dynamo. With a successful acting and modeling career already under her belt, she is taking on even more roles. She is a global environmental activist, founding director of the ecoconscious MUSE schools, mom to four children and wife to megadirector James Cameron (Avatar, Titanic).

One of her most well-known projects is Red Carpet Green Dress, an annual event that challenges fashion designers from around the world to come up with an environmentally friendly dress or tuxedo to be worn by celebrities at the Oscars in Los Angeles. Now in its sixth year, the contest not only builds awareness for the ecofashion industry but also raises money for MUSE schools. This year’s winners are Manon Gabard and Tingting Chen, both fashion students at ESMOD-ISEM in Paris. 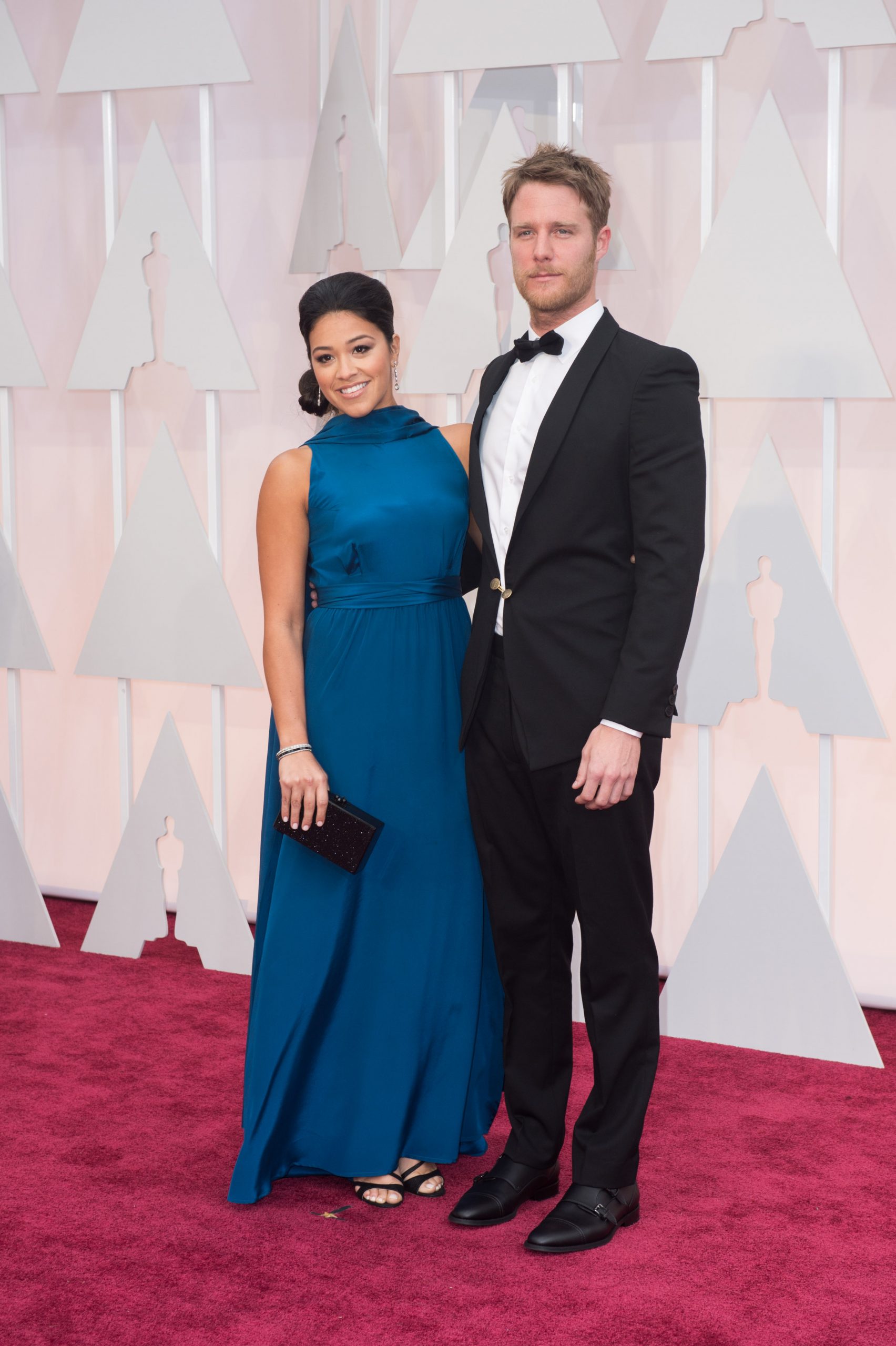 Gina and Jake on the Oscar carpet.
Image courtesy of A.M.P.A.S.

The stunning blue dress worn by Gina Rodriguez (Jane the Virgin) was made with fair-trade peace silk produced without harming the moths and dyed with low-impact pigments. The tuxedo worn by Jake McDorman (American Sniper) was made with hemp silk and plant-dyed pea silk. His whole outfit was sustainable, right down to his hemp boxers.

Amis Cameron spoke to Jessica Burman from Manhattan, in March.

Suzy Amis Cameron: Scale is an issue. We’ve been talking to quite a few people about how we can do it. The Ethical Fashion Forum has an amazing database of fabrics, mills and people who dye clothes from all over the world, so I think that there is a way. Reformation, whom Red Carpet Green Dress just partnered with for a collection of six dresses, gets remnants from the big companies who will buy enough fabric to produce, say 20,000 pairs of black pants and will inevitably have thousands of metres leftover. Reformation purchases this fabric at a lower cost and then they might be able to produce 500 pieces from it.

They don’t work seasonally with a summer or winter line. They churn out clothes every month, so if you see something in their store that you want, you had better grab it because it won’t be there in a month’s time. Even their factory is environmentally friendly, with a heat-reflecting roof and a garden in the back. The CEO, Yael Alfalo, is very conscientious, as is everybody who works there. It’s very refreshing.

What do you look for in a Red Carpet Green Dress design?

A variety of things. The look is one thing, but more important is the thought behind the material being used and the process employed. People will send very detailed information about where the fabric comes from, how it’s manufactured, how it’s dyed, sometimes using a zero-waste design where they’re using all the material. There’s a lot of waste in regular fashion. We look for things like reused or repurposed beads, buttons and zippers. All of those elements combined enter into the discussion.

What impact has Red Carpet Green Dress had on the ecofashion industry?

Every year we’ve been able to generate more and more press. It’s been interesting to watch the ecofashion world evolve over the last six years. The first year I did the event, I had planned to do it just that one time, but as I got into it, I realized how difficult it is to source sustainable fabric and dyes. I actually pulled together a group of people involved in ecofashion to brainstorm about these challenges. At first, I would say that there were about six or seven top ecodesigners with their own little mom-and-pop shops, but that number has tripled if not quadrupled since then.

What advice do you have for dressing sustainably?

People often ask me if I dress in an environmentally friendly way every single day. I do my best but there aren’t a lot of choices out there. When I do invest in a piece of clothing, I make sure that it’s something I can wear until I’m 80 years old. When I was 17 and immersed in the fashion world as a model, I started buying clothes with simple, classic lines that I still wear today. That’s one way to look at it, instead of having the right pant leg of the season.

What do you hope to see happen in the ecofashion industry?

I would love to see more of the household-name designers making a difference; however, big names such as Vivienne Westwood will put out a small eco collection and then end up getting attacked about the rest of their line [not being sustainable]. At least they’re taking a step! I’m hoping someone is going to make a line of sustainable clothes that we can wear every single day. Who knows, it might be me.

I hope people will start to look at what they put on their body from both a health standpoint and an environmental standpoint. The effects of fashion on our biosphere are devastating and the chemicals being used to dye the clothes are endocrine disruptors. Making the choice to change the way you dress is a win-win situation for you and the planet.

Jessica Burman is the founder and owner of organic skin care line Cocoon Apothecary. She likes getting down to the bottom of things and exposing toxins lurking in every day products, and blogs for A\J about how everyday consumer choices can effect your health and the state of the planet. She is passionate about ditching synthetic chemicals in favor of simple, time-tested alternatives. She lives in Kitchener and is a mom to two youngs girls and too many pets.