“Science insists that we can’t express particulars. But we love things in particular, not in general … and when you love something in particular, you’re not inclined to see that it could be replaced by anything else.”
– Karen Houle, writer-in-residence, rare Charitable Research Reserve.

“Science insists that we can’t express particulars. But we love things in particular, not in general … and when you love something in particular, you’re not inclined to see that it could be replaced by anything else.”
– Karen Houle, writer-in-residence, rare Charitable Research Reserve.

In one of the oldest villages of Upper Canada, a hidden gem of ecosystem biodiversity rivals the Niagara escarpment looming above it. The rare Charitable Research Reserve is a 370-hectare plot of protected land at the union of the Grand and Speed rivers near Blair, Ontario. Nearly as large as Vancouver’s Stanley Park, the reserve is home to over 24 habitat types, 600 species of plants, 379 animal species, eight kilometres of public hiking trails and a community garden.

Hikers, birders, historians and field naturalists all use the reserve. Biologists, ecologists, archaeologists, geologists and geographers from universities both near and far have conducted nearly four dozen research projects there since 2004. But now, rare is blurring the lines between natural science and the arts.

One such new departure is the Eastern Comma writer-in-residence program, a joint venture with philanthropic arts organization Musagetes. Named after a black and orange butterfly that frequents the reserve in summer, the program aims to bring “an additional layer of meaning” to the hard scientific research commonly conducted at rare, says executive director Stephanie Sobek-Swant.

Seeking someone to inaugurate the Eastern Comma residency whose insights might be “more accessible” to the general public, and whose work reflected an interest in the environment, rare and Musagetes chose Karen Houle. Author of two nationally acclaimed books of poetry, Houle is also a philosophy professor at the University of Guelph with a background in biology. This “tripartite expertise,” as Houle calls it, made her an obvious choice.

During Houle’s time at the reserve, she developed an idea about what’s missing in science, and what might help us care more about the loss of Earth’s many unique species and ecosystems.

For three months in the fall of 2014, Houle’s residence was rare’s North House. The high-tech, solar-powered prototype dwelling was designed by a team of students and faculty members from Waterloo, Ryerson and Simon Fraser universities as an entry in the 2009 United States Department of Energy Solar Decathlon, finishing in fourth place. Active and passive solar features produce twice as much energy as the building uses, with the surplus powering the nearby Springbank farmhouse.

With floor-to-ceiling windows on three full sides and glass panels even in the bathroom, Houle found the house didn’t satisfy her dual human impulses for, as she puts it, both “closedness and openness.” With no privacy indoors, she said “I needed to go outside all the time. Even though in a funny way, you already are outside in that house.” 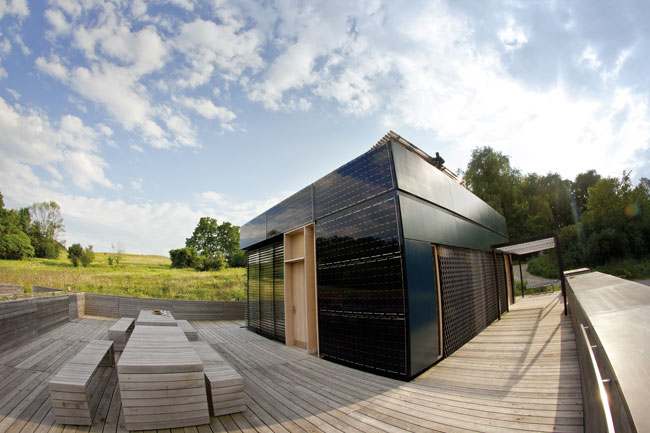 Luckily, being outside suited Houle’s kinetic writing process. “Any poem I’ve ever written,” she explained, “I’ve first had to move my body,” whether through walking, biking or riding in a train or car. “Things around you are moving at different paces, so you get this syncopated feeling – I guess that’s called parallax. There’s a rhythm that can start happening, and ultimately, poetry is about words jumping onto that rhythm.”

Eventually a poem would start to “knit itself together.”

Still, Houle’s creative process had much in common with the more observationally meticulous, lists-and-measures science usually carried out at rare. She spent a lot of time walking the trails, often in company with scientists, absorbing as many impressions as she could from the environment: “the alvars and the deciduous forest and leaf litter; the boardwalks over the marshy parts; the rehabilitated fields of high grass prairie; the soggy parts of Cruickston Park and Bauer Creek.” She peppered researchers with questions, and read articles based on their work at rare. Once she felt fully saturated with information, she would go out and just walk. Eventually a poem would start to “knit itself together,” she says. “I think that’s what they call ‘the muse’.”

Back “indoors” at North House, Houle would reread scientific papers, “looking for a phrase or a claim that felt like it had a kinship with the pieces I had pinned down.” These she used to “scaffold” her poems with empirical insights. Speaking publicly in March 2015, Houle described her use of research this way as a fast-track to precision and detail, relying on “hands and eyes that had spent more time than I had” finding patterns in rare’s ecosystems.

But this, to the poet, seemed to overlook something. “Where’s the particular in this? Where’s the, ‘this is the branch of this river that I love’?”It was as she read and reread the science that has been done at rare, however, that Houle began to articulate long-held reservations about the value that science places on universality. “I was reading those articles,” she recalled, “and had in my mind that, ‘Yeah, this is the kind of approach that’s needed, because it’s neutral or objective.’” Indeed, both the language and practice of science are rooted in the desire to describe universal general rules: E=MC2 or, in Houle’s example, comparing one stand of butternut trees to another to draw conclusions about all butternut trees.

“Because of this methodological demand to generalize or universalize,” Houle argues, there’s no room within science for a “confession about loving one tree, or one person, or one patch of gravel.”

“There needs to be a kind of complementary gesture, able to express the love of and concern for the particular without that seeming irrational.”
– Karen Houle

The point resonates in the practical realm, she adds. When the science used to rationalize development, innovation and political decision making is expressed in universals, it makes a false assumption about the perfect substitutability of elements: if all butternuts are similar, any butternut is as good as another – and can substitute for it.

This “thinking that something can be replaced by something else with no real loss or concern,” Houle argues, is “getting us all in a lot of trouble.” Some things are simply not substitutable.

This is hardly news to many environmental thinkers. As Houle observes, it’s a love of particular places and things that inspires much scientific work, yet that love is rarely able to shine through.

Houle doesn’t know exactly how to counter the imperative of universality in science, only that “there needs to be a kind of complementary gesture, able to express the love of and concern for the particular without that seeming irrational.” We need, that is, to let science appreciate both the big universals and the unique particulars. One approach, she suggests, is to cultivate an “historical sense” of our surroundings: producing not just a “snapshot of a river,” but an understanding of this river, and its story over time.

Only by infusing the scientific search for general truths with the sensibilities of the particular – honed in the arts, history, or by a poetic ear that can “hear past the language of science” – can we truly appreciate the unique and the irreplaceable. We must learn not only how to know things, Houle argues, but also “how to be moved by things.”

The fall asters  – Symphyotrichum –
fill Sparrow Field, to the north,
they fill the eye, in fall.

In fall, the asters are in flower.

They are the kind of flower that,
to make another one, rely
entirely on something other than a flower:

A vector
A wingèd thing
A brief inconvenience

Something other that takes a bit of her and carries it to the mouth
of a hole in another.

This means she has a permanent need–

including but not limited to bees, flies, butterflies, beetles, bats and birds–

a permanence to her reliance upon

Any of the 43 kinds of bee, or weevils,
or tree crickets even

With their hooked leg hairs and crushing mouthparts,
which they take promptly & directly to her soft parts:

There might be a coaxing.
in a sing-song voice
at the (as yet unreceptive) pistil.

There is always the not-small-matter of acceptance:

Touch is an open-mouthed form of trust,
Touch is a strictly private matter between you and not-you; communion–
A swallowing whole of the bread body;

Of the pollen or the saviour himself which should never
touch the teeth as it passes.

In these moments your future is someone else’s making.