Imagine you’re walking through the city, mask-clad, on the streets which slowly started becoming alive as lockdown restrictions were being lifted. With a long stretch of road ahead of you, envision how much easier getting groceries would’ve been if there were shops within a short walking-distance to where you lived. Maybe, it would’ve been easier if you had a vehicle or gave-into the fear of potential COVID-19 infection by being in an enclosed form of public transit. You could order online but maybe you should save money on those extra service charges since who knows when the job market will be stable again. That is the dilemma many faced during these unprecedented times. Now imagine if you lived in a city where the grocery, your home, work and other services were all within a short walking distance. How much more convenient would life be?

What is a Walkable City?

Paul Hawken’s book, Drawdown, defines walkable cities to include areas where there are safe pedestrian crossings, mass transit connectivity, walkways that are well lit, wide and tree lined, along with a density of homes, workplaces and other spaces.

Walkable villages, communities, towns and cities have existed since the dawn of time. However, since the invention of the wheel and industrialization, modern urban planning and lifestyle has demanded that more people use some form of transportation to get from one point to another in their daily routines. The use of bicycles, private vehicles and public transit have become necessary to get to jobs, schools, groceries and run errands. Due to this, the distance between people and businesses continues to increase simultaneously with development.

However, decreasing the distance between where people live and where they need to get to on a daily basis without the need for cars and heavy dependence on public transit can greatly reduce the amount of greenhouse gas emissions, improve mental and physical health and increase human interaction.

Proper planning and safety are of high importance when promoting a walkable city, as expressed by experts Kristen Agnello, representative from the Canadian Institute of Planners and Dr. Jill Grant, Professor Emeritus, School of Planning, Dalhousie University. Dr. Grant noted that if people are not confident that a physical space is safe and free from crime or violence and even the fear of disease that is being experienced with COVID-19, then people will not go out to walk. Agnello said that safety is impacted by the social and cultural legacy of a city and sometimes the reputation of a city impacts its walkability.

Agnello emphasized that knowing who you are designing for in a city is what makes the difference. If you design a city to encourage the movement of cars, then that’s what you’ll get -the same applies for walkability. To design for walkability Agnello said that walkability is not just encouraged through the implementation of wide sidewalks with curb cuts but also places that are safe and harassment-free. As well as, welcoming for everybody regardless of their socio-spatial factors including race, gender, age, ability and their income. Dr. Grant and Agnello also alluded to the physical elements that promote walkability which included wide, clear pathways (around 1.5 – 3m wide) without tripping elements that are optimal for people with disabilities (wheelchair and cane-safe) and strollers. It also gives space for people to pass each other comfortably.

Regarding other elements, Agnello stated that art incorporated into the architectural design such as on street walls and buildings, as well as, art installations on streets are important. Similarly, someone’s walk is made more interesting, comfortable and walkability is promoted when small pocket parks with seating near architecture exist and when spaces have a sense of enclosure, such as when tree canopies are incorporated into the surrounding space. Dr. Grant said that greenspaces, paths near water and other picturesque elements encourage walkability as well. She also mentioned that connectivity and predictability of pathways such as a route without dead-ends or one that brings someone back to their starting point can also encourage more walking.

Weather and the seasons also play a big factor in enticing the public to walk. Dr. Grant noted that an example includes heated sidewalks being installed in Scandinavia which promotes walkability in the winter. Shading from trees is also important, especially during the summer. Agnello brought up the point of the temporal aspect of a day where foot traffic varies and suggested that good lighting at night is important for providing a sense of safety.

While the focus is usually on people needing somewhere to walk to, emphasis should also be placed on where people need to walk from. Having housing closer to a destination like stores, jobs, school and places for recreation and other services similar to that of a compact community can promote walkability. Agnello pointed out that having a mix of commercial and residential land use is critical. She also said that while walking is vital, a city with mixed land uses and modes of vehicles such bicycles, transit and pedestrians is important since not everyone can walk for long periods of time. An inclusive environment is promoted with rest points where people can meet new individuals, converse or simply observe the surroundings. Having transit within 10 minute walk nodes is also convenient.

Promoting a walkable city comes with benefits which include physical and mental health, community cohesion and economic gain. Health benefits from exercise and walking can have positive impacts on cholesterol, diabetes and obesity. Mental health benefits would be on the rise especially for seniors who may be isolated and confined to their homes with little human interaction. Walking will help with community cohesion as it promotes more public interaction. Economically, walking makes it easier for you to make purchases from shops along your route compared to if you were driving.

The success of the city being walkable can be obtained when community engagement is considered in the process as the public will be able to make decision-makers aware of factors that are important in the planning process. Dr. Grant mentioned that people have always been interested in trails, bike-ways and other infrastructure for walking and hiking. Ensuring that greenspace and recreational activity are incorporated into walkable spaces will promote walking as a norm. More information on this can be found in the following article on greenways and greenbelts.

The Present, Past and Future of Walkable Cities

Cities like Vancouver, Montreal and Banff have small pockets of walkable areas. Agnello said Banff particularly did a great job in the design and functionality of the streetscape making it simple for a small tourist town by having great signage, scramble intersections allowing for efficient crossing and having a mix of different conditions in the sidewalk. Dr. Grant mentioned that the size of the city also impacts walkability and its efficiency increases in areas with small –scale streets such as in Kingston and Halifax.

In the past, cities were set up differently from what we see today. During the time of urban planning and development’s guru, Jane Jacobs, in her book, ‘The Death and Life of Great American Cities’ she wrote about sidewalks and its relationship with safety and for children’s play, parks, neighbourhoods, diversification and densification for lively cities. According to Dr. Grant, Jane Jacobs focused on making cities more mixed use and interactive. Agnello stated that Jacobs sheds light on the fact that cities have an impact on us but we need to understand that everyone has a right to exist and benefit from a space but in order to have an equitable walkable city this factor must be addressed.

Car-dominant cities can transition into being more walkable cities if governments and municipalities find walkability measures, measure those parameters and monitor them over time. Agnello said that it is also important for the policies, designs and plans of cities to be scrutinized for exclusionary language (e.g. in terms of diversity and equity) and also for preferential treatment of vehicles (e.g. excessive parking requirements especially heritage buildings). She also stated that we need to be cognizant of the fact that policies in one area may affect the walkability of a community in another location since it was not necessarily tailored to that particular time or place. 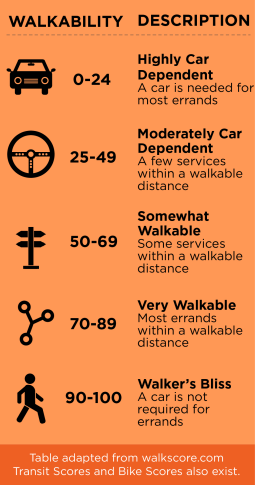 In modern society Walk Scores are available for places (see table). The closer the walk score is to 100, the easier it is to walk to get errands done. In the “Walking the Walk” study by CEO’s for Cities, it was seen that a one point increase in a Walk Score can increase property value in a variety of housing markets by US$500 to US$3,000. Despite this price varying with location, this shows that having walkable cities not only benefit the physical health of residents and the nearby businesses they patronize, but also help the real estate market.

Walkability of a city promotes improvement in mental and physical health, as well as, stimulates the local economy. It can be observed that cities are seen as more walkable if the architecture and landscape are appealing. However walkability of a city works best when the planning, designing and implementation of infrastructure are considered from an inclusive lens.

Want more stories like this? This article is featured in our next issue, Getting There: The Ecosystem of Human Movement. Check out the next issue for more!