When you think about advocating for the environment, you probably imagine people holding protest signs and chanting. But three people in Waterloo Region had the idea to combine their passion for conservation and climate action with their love of music. Tunes for Trees was a zero-waste concert and fundraiser held by the Communities for Conservation. The name of the event, “Tunes for Trees”, came from the fundraising initiative; for every $5 donated, two trees were planted in a deforested area in Canada. This was the organizers’ first time putting on the festival, and despite only having 2 months to put together a concert, it was a smashing success.

The festival’s three organizers, Claryssa Webb, Ryan Dugal and Keenan Reimer-Watts, said the idea for Tunes for Trees came up naturally. They were feeling depressed about climate change and wanted to do something to help. “We didn’t set out to do a music festival, we just got more and more ideas,” Ryan explains. The three met through music: Claryssa and Ryan are in a band called A New Ground together, and Claryssa met Keenan in the music program at Wilfred Laurier University. As musicians, they wanted to use their art to fight against climate change. “We want to change the world for the better through music,” says Clarissa. 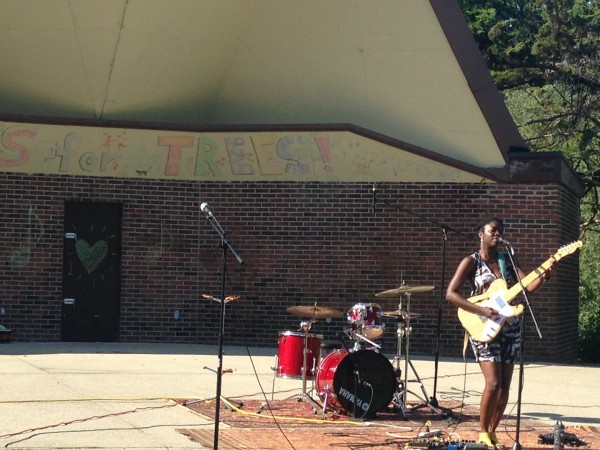 The Tunes for Trees concert was open to everyone, and because it was set outdoors in a park, people flowed in and out of the event freely. 10 bands lined up to perform, and interestingly, there were dedicated time slots for environmental speakers as well. It just seemed natural to the organizers. “We had a stage,” Keenan says. Connecting the audience to the environment on the Tunes for Trees’ stage were local activists, politicians, experts, and even some of the musicians who played for the concert. They spoke on topics ranging from climate change to deforestation, plastic pollution to becoming a vegetarian.

Aside from sharing information, Tunes for Trees also sought to create a sense of community around climate change. People could visit the Village Green, where environmental organizations like Reep Green Solutions had set up information booths, and an on-site bicycle repair booth fixed 30 bikes during the event. The organizers tried to make donating to their tree planting efforts as easy as possible by setting up text-to-donate. Keenan explained the simplicity of the system; all you had to do to donate on-site was to text “conserve” to the number 20222 and then reply with “yes” to the $5 charge. While Tunes for Trees is over, Communities for Conservation is still planting trees and you can text-to-donate to them year-round! 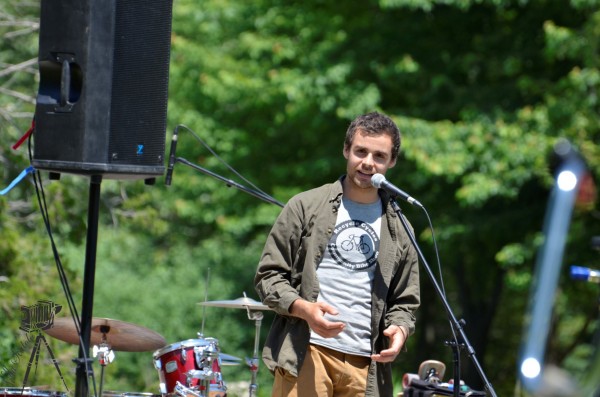 Another bold initiative the organizers took on was making their first Tunes for Trees event zero-waste. It wasn’t easy for them. The electricity needed to run stage equipment was hard to find in the middle of Waterloo Park, and renting a battery pack to power the stage proved to be too expensive to justify. A gas generator had to be used, but to compensate they had Bullfrog Power offset the emissions. Their zero-waste food option fell through, so they tried to minimize their waste impact by providing chickpea burritos with compostable wax wraps instead. Luckily, people were mindful when disposing of their waste and the environmental impact was very little. But none of this has dampened the organizers’ enthusiasm for zero-waste or other ambitious environmental goals. Next year, they’re planning to shoot even higher by having bicycles volunteers could ride to generate electricity for the stage.

The event was a success on all counts and an amazing learning opportunity for the organizers. Tunes for Trees is already preparing for their next concert, which will be held in summer 2020. They hope to inspire musicians in other parts of Canada to join them and hold Tunes for Trees concerts across the country, sowing the seeds for a greener future!

For more information about the events, organizers or donating year-round towards conservation visit the Tunes for Trees Facebook Page!

Lauren is an editorial intern with A\J. She is an aspiring creative writer and recent University of Waterloo graduate.

Nengi is a fourth year Geography and Environmental Management student at the University of Waterloo. She is a summer intern with A/J