THE ELDERS OF KITCHENUHMAYKOOSIB INNINUWUG (KI) FIRST NATION KNOW that local water flows through their blood, and that their bodies are built of the trout that swim in its clean rivers and lakes. Taking care of their watershed is a sacred responsibility handed down to the KI youth from the Creator through the teachings of their elders.

THE ELDERS OF KITCHENUHMAYKOOSIB INNINUWUG (KI) FIRST NATION KNOW that local water flows through their blood, and that their bodies are built of the trout that swim in its clean rivers and lakes. Taking care of their watershed is a sacred responsibility handed down to the KI youth from the Creator through the teachings of their elders.

The KI people have governed and cared for their Indigenous homeland – Kitchenuhmaykoosib Aaki, located about 580 km north of Thunder Bay, Ontario – since time before memory. They share their way of life from one generation to the next. But things are changing rapidly in KI because of climate change, and the elders are struggling to prepare the youth to meet these challenges.

KI’s territory is also rich in minerals and precious metals, attracting mining and exploration companies who try to operate without the “free, prior and informed consent” (FPIC) of the community.The close connection of the KI people to the land and climate means that disrupted weather patterns hit particularly hard, and unwanted industrial activity would only further jeopardize their traditional way of life. The elders feel that passing on their traditional knowledge to the younger generations is vital to providing them with the tools to adapt to ongoing social and environmental changes. 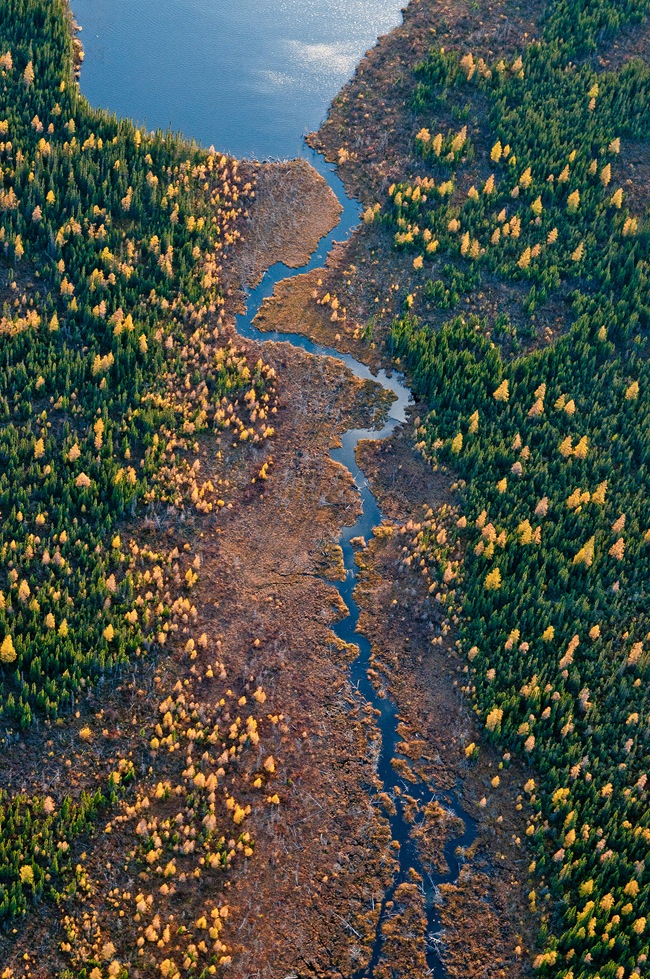 Kitchenuhmaykoosib Aaki is located in the heart of one of the world’s largest intact forests. For hundreds of kilometers in all directions the forest has never been logged or fragmented, remaining much as it has been since shortly after the glaciers retreated 9,000 years ago. The boreal forest?represents the largest carbon storehouse on Earth – a critical buffer against runaway climate change – and also forms part of the planet’s greatest reservoir of freshwater. 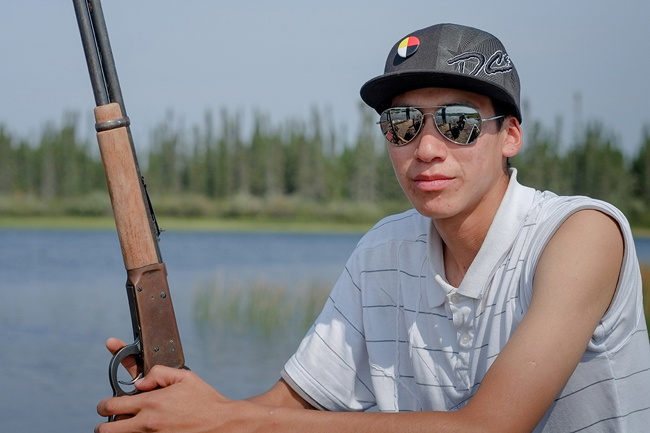 On the shore of the Fawn River, Brandon Crowe holds his most prized possession: an old rifle that used to belong to his grandfather. Brandon’s grandparents raised him and four of his siblings on food and income from hunting and trapping. Like Brandon’s rifle, the traditional knowledge of how to survive on the land has been passed down from generation to generation. But things are changing rapidly in KI and the elders are struggling to prepare youth to meet challenges. Many of the elders are not fluent in English and most of the youth are not fluent in their traditional Oji-Cree language, making simple conversations quite difficult. 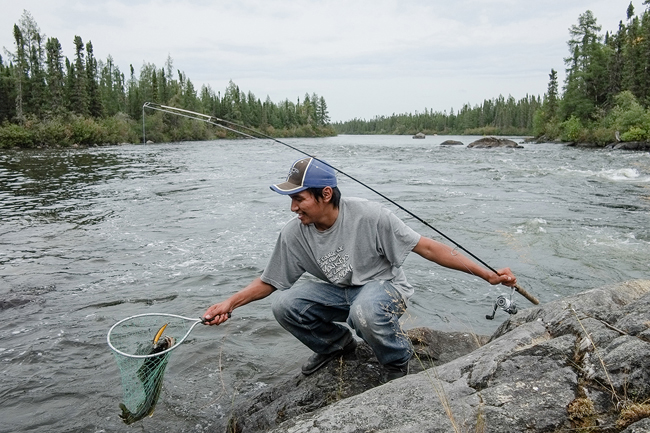 Orion McKay catches some pickerel for dinner on the Fawn River. Indigenous communities like KI depend on the clean water and fisheries that these rivers provide, and they are determined to safeguard their water. In 2011 the community voted overwhelmingly in favor of the KI Watershed Declaration, which places their entire 13,025-square-kilometer watershed (which includes the Fawn and much of the Severn River) off-limits to industry under Indigenous Law. KI elders insist that water is sacred, and their teachings prohibit them from doing anything to the water that might harm those who depend upon it – including fish, animals and people. 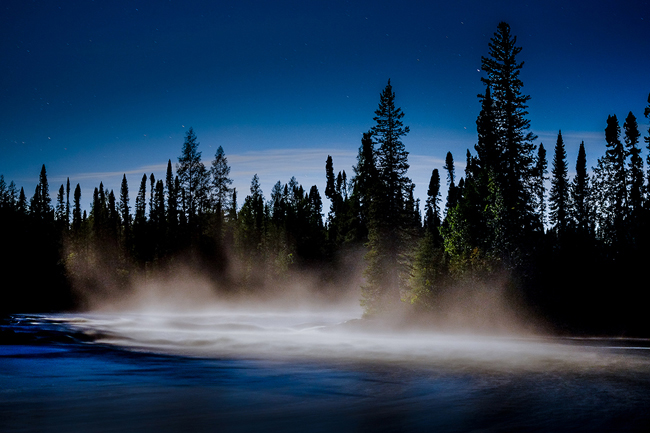 The KI people know this spot on the Fawn River as Muskeg Portage. Elders call the muskeg wetlands the “Breathing Lands” because they are the lungs of the Earth. KI’s visionary decision to protect their watershed benefits not only their community, but also the entire planet. Preserving their watershed keeps carbon and methane reserves safely locked up and out of the atmosphere. The thick layers of moss and soil in this ecosystem play a critical role in stabilizing the climate by storing twice as much carbon per hectare as tropical rainforests. 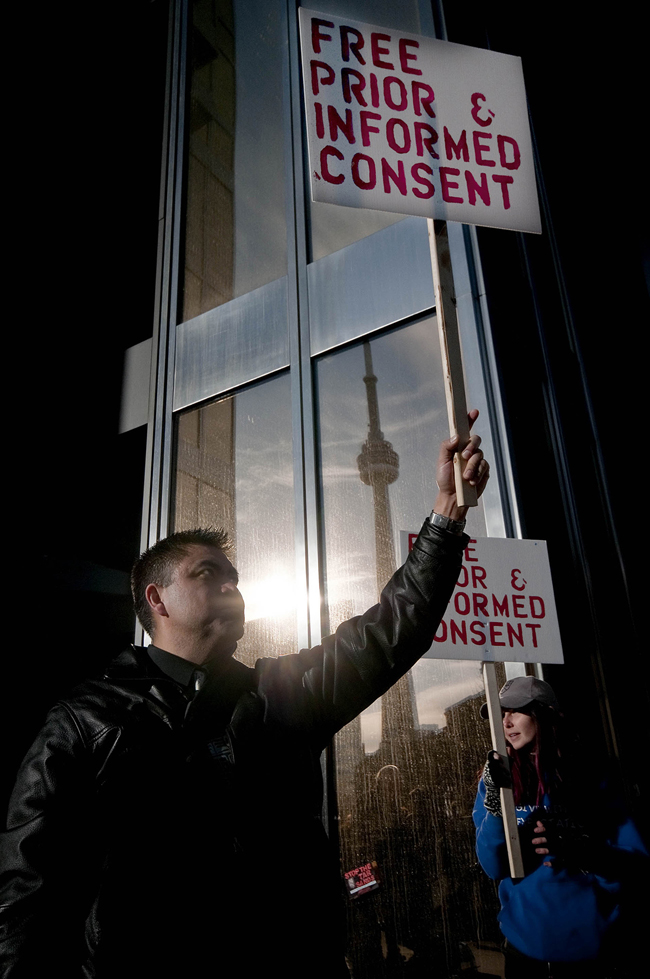 KI’s territory is rich in minerals and precious metals, which has attracted mining and exploration companies that have attempted to operate there without the free, prior and informed consent (FPIC) of the community – as required by the UN Declaration on the Rights of Indigenous Peoples, to which Canada is a signatory. In March 2010, supporters in Toronto (like Terry Teegee and Taylor Flook, pictured above) showed their solidarity with various First Nations’ efforts to defend their indigenous rights. KI has successfully stopped two companies, Platinex and God’s Lake Resources, from mining on their traditions land, with the support of such protest campaigns. 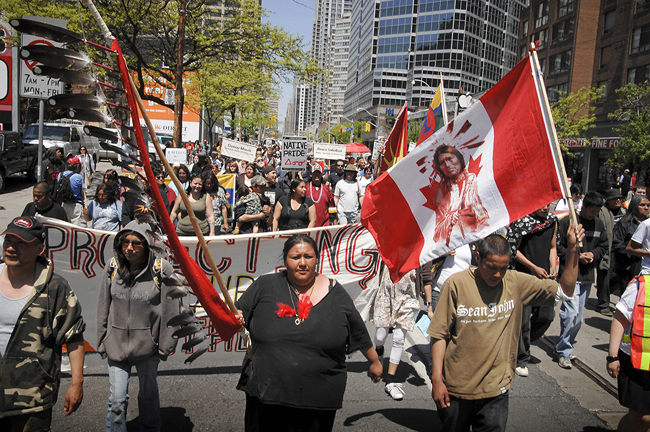 In 2008 the KI community was sued for $10-billion by Platinex Inc. The Ontario Government put six community leaders in jail, including the chief and several council members, for refusing to allow mining exploration. While the “KI-6” were locked up, hundreds of supporters marched through Toronto’s Financial District and camped out at the doorstep of Queen’s Park. Eventually the Ontario government paid Platinex $5-million to abandon their claim. Fearing further high-profile conflicts and costly buy-outs, the province also withdrew approximately half of KI’s watershed from all mining activity. But the fight isn’t over; once again the government’s decision was reached without the FPIC of the community, and fails to recognize the people’s right to protect their entire watershedand control their homeland. The government also left half of the KI watershed open to mining exploration – a situation that seems to invite further conflict. 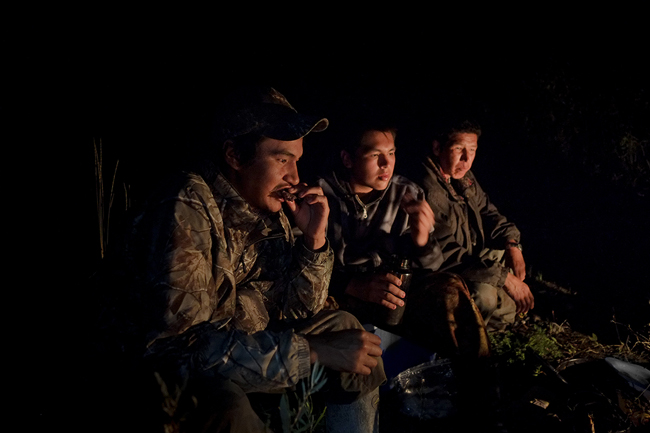 At the end of a long hunt,  Orion McKay, Rory and Joel Chapman enjoy the delicious caribou they shot earlier in the day. Historically, the people of KI lived out their lives on the land, travelling around to find food and survive, using what the Creator gave them. The elders emphasize that this is the way things should be – as it has been for their people for countless generations. But lately KI elders and hunters are noticing big changes in the number of local wildlife. Birds, animals and fish were once abundant, the elders say, but their numbers are decreasing rapidly making it harder and harder for the hunters. Industrial activity on these lands would only make things more difficult for the community by causing more depletion. 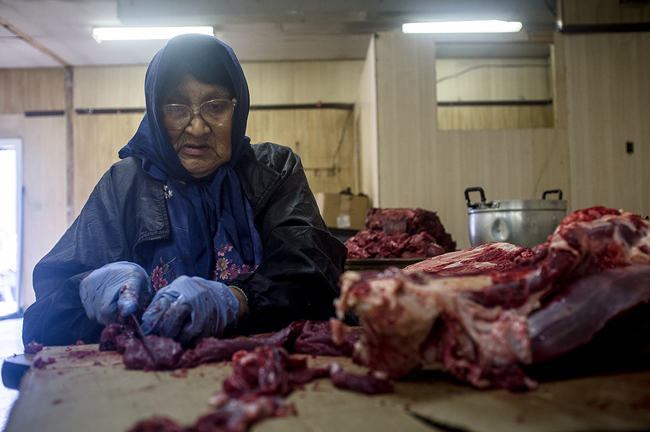 After the hunters bring their catch back home, grandmothers like Rebecca Hudson divide and share the meat among the whole community. Caribou have been an essential source of protein here for thousands of years. They remain one of the healthiest and most affordable sources of sustenance available in KI, where expensive outside food must be flown in or trucked long distances over ice roads. The KI people take care of the vast landscape the caribou rely upon, and the caribou provide much-needed winter meat – a sacred and ancient relationship that lives on. 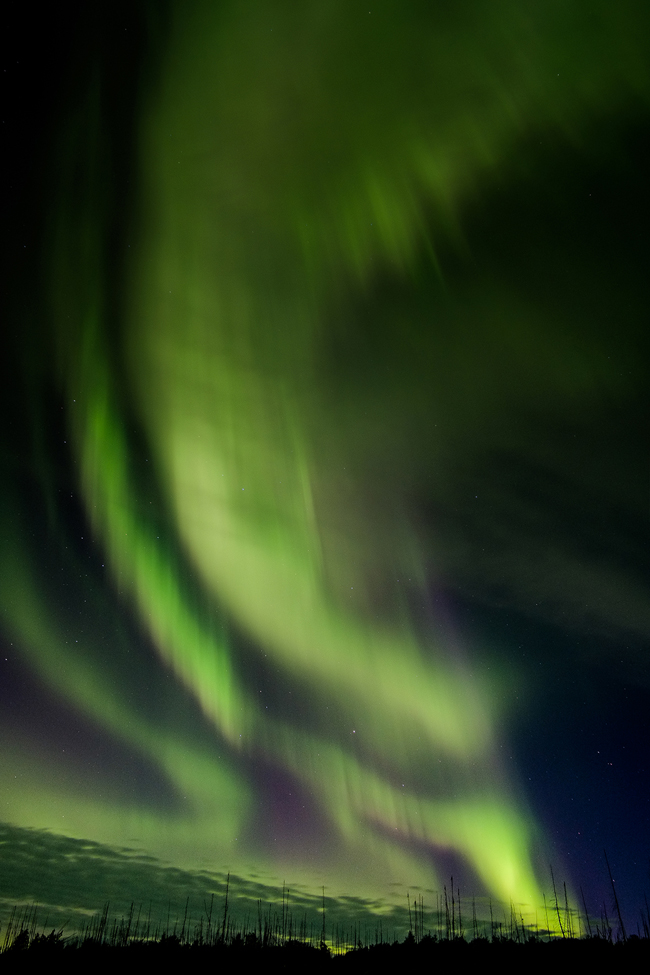 “We knew everything about what was going to happen with the weather; we would look to the sky. Wawatay [the Northern Lights] would tell us stories about what would happen. When the wawatay were very clear, the waters would be calm the next day. If they were moving a lot, then it would be windy. But that does not work anymore. Today, I look at the sky; I say it’s going to be a good day tomorrow, and then the next day it’s raining. Everything that we see is different now: the summer is getting hotter and hotter, and when the season changes to fall it gets cold right away. It never used to be like that.” —Mary Jane Crowe, KI elder 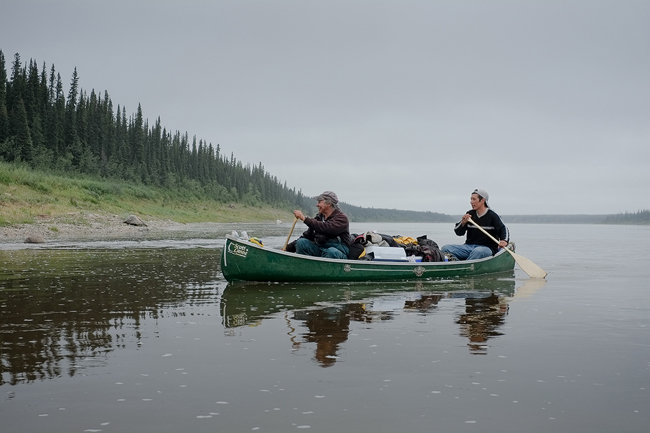 Louie Tate and Joel Chapman paddle down the Fawn River. All along the Fawn and Severn rivers are signs of Indigenous land use – recently used camps, well maintained portage trails, fishing nets neatly folded and hanging on trees. This landscape is remote on the grandest scale, yet it is well known and loved in the culture, memory and day-to-day lives of these people. KI elders are hoping that future generations will follow the traditional teachings and eventually pass down what they were taught. Learning how to survive on the land will be necessary to prepare the next generation to adapt to ongoing changes in their environment, which the elders predict will only get worse in the near future.

Allan Lissner is an award-winning photographer, videographer, editor, and graphic designer based in Toronto, Canada.

Some of the organizations Allan has done work with include Amnesty International, GlobalAware, the Indigenous Environmental Network, KAIROS, Oxfam, Make Poverty History, the Norwegian Church Aid, the Ontario Council for International Cooperation, the United Nations Development Program, and the United Nations Women’s Association in Bangladesh.