THE STORM THAT HIT Toronto on July 8, 2013 dumped 126 millimetres of rainfall in a two-hour period, which is more rainfall than the city typically gets in the entire month of July. Severe flash floods paralyzed public transit and stranded thousands of commuters. Power outages affected at least 300,000 residents, and a billion litres of sewage surged into Toronto’s streets and harbour.

THE STORM THAT HIT Toronto on July 8, 2013 dumped 126 millimetres of rainfall in a two-hour period, which is more rainfall than the city typically gets in the entire month of July. Severe flash floods paralyzed public transit and stranded thousands of commuters. Power outages affected at least 300,000 residents, and a billion litres of sewage surged into Toronto’s streets and harbour. Toronto’s wettest day in history also set the record for Ontario insured-property damages arising from a single natural disaster. The costs were over $850-million. As Toronto Star columnist Christopher Hume wrote at the time, we “face a double whammy of disaster: Not only is the city’s aging infrastructure unable to cope with the load, but that load has grown heavier because of climate change.”

The World Meteorological Organization reports that floods were the most frequently experienced extreme weather event between 2001 and 2010, and that northern and eastern Canada were particularly wet. This same decade was also Canada’s warmest. Climatologists predict a continued rise in temperature and, as a result, a high likelihood of intense rainfall events and increased frequency and duration of drought. Certainly, we all recall the historic drought in 2012, which had catastrophic ramifications for agriculture. A continued rise in global temperature is also anticipated to increase sea levels and coastal flooding.

The degradation of urban ecosystems contributes to climate change, and in turn reduces the capacity of cities to cope with the often-severe outcomes of that change.

Such weather trends and predictions raise difficult and important questions about the future of Canadian cities: How will our urban centres cope with extreme weather that is expected to become more severe and more frequent? Will our current infrastructure designs and plans for 2050 actually meet the needs of Canadian cities at that time? Without a doubt, we are faced with an unprecedented set of issues – climate change, population growth, resource constraints and rapidly increasing urbanization – that call for a radically different approach to urban planning and design.

The parallel surge of extreme climate patterns and urban sprawl is no coincidence. Between 1990 and 2000, the total built-up areas of cities with a population in excess of 100,000 grew at twice the rate of population growth, and average urban densities across developing and industrialized countries decreased at an annual rate of 1.7 per cent over a similar time period. Along with sprawl comes the vast loss of forests, farms, water bodies and associated ecosystem services such as flood mitigation, erosion control and thermal cooling. The degradation of urban ecosystems contributes to climate change, and in turn reduces the capacity of cities to cope with the often-severe outcomes of that change. Today, over 80 per cent of Canadians live in cities – and this number is growing. The Western cities of Calgary and Edmonton experienced a growth rate of over 12 per cent between 2006 and 2011, while Vancouver, Toronto and Ottawa grew by over nine per cent during that period. Even more startling, however, is the growth rate in suburbs. A population census in 2011 registered a 42.9 per cent growth rate since 2006 in Okotoks, Alberta, a suburb of Calgary while Milton, a Toronto suburb, registered a 66.1 per cent growth rate during the same period. 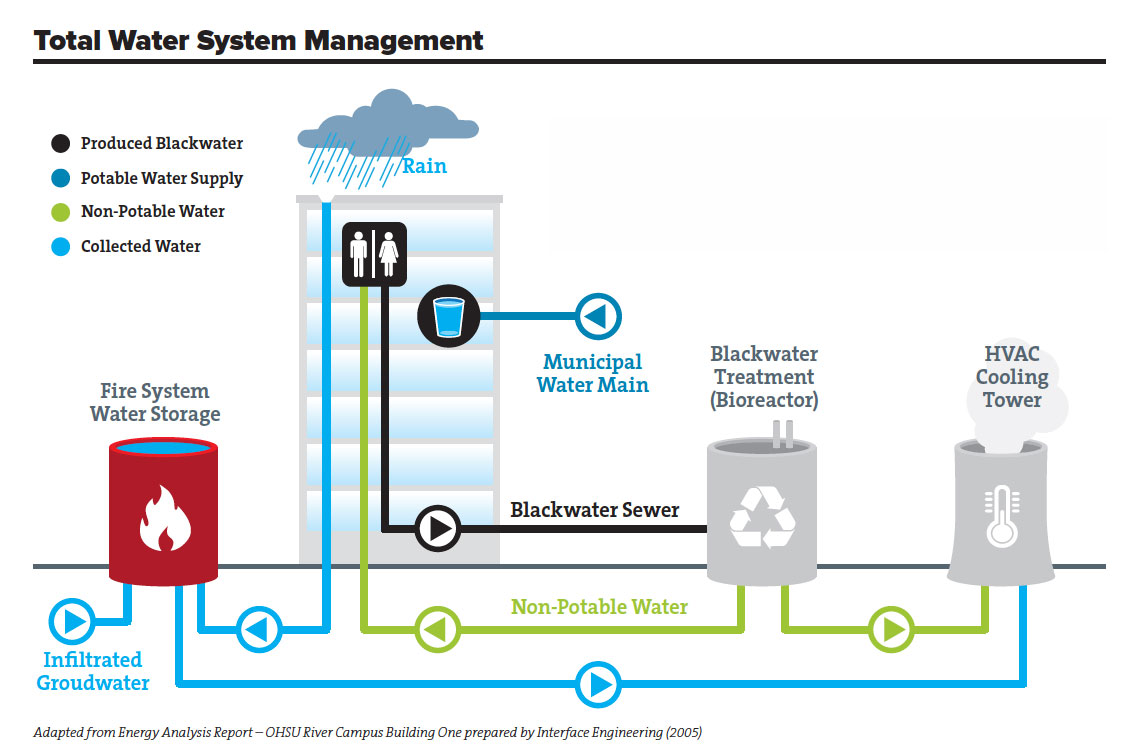 The Center for Health and Healing at Oregon Health Science University uses a water management system designed by GBD Architects. The system treats 100 per cent of wastewater from toilets and landscaping with an on-site bioreactor. This contributes to a 56 per cent reduction in potable water use and annually diverts over 56,000 litres of water from city sewers.

For example, existing low-density suburban developments “actually increase the damage on the environment while also making that damage harder to see and to address,” wrote Green Metropolis author David Owen. Although Forbes ranked Vermont as the greenest US state in 2007, Owen’s 2009 article revealed that a typical Vermonter consumed 2,063 litres of gasoline per year – almost 400 hundred litres more than the US national average at that time. This vast consumption is primarily due to single-use zoning and the absence of a comprehensive public transit system. Contrary to popular belief, dense cities such as New York City typically have the lowest carbon footprints. NYC emits 7.1 tonnes of greenhouse gases per person per year, or less than 30 per cent of the US national average. This is due to its extreme compactness. Over 80 per cent of Manhattanites travel to work by public transit, by bicycle or on foot. Population density also lowers energy and water use, limits material consumption and decreases the production of solid waste. For example, Japan’s urban areas are five times denser than Canada’s, and the consumption of energy per capita in Japan is 40 per cent lower.

Municipal governments around the world are starting to address climate change mitigation and adaptation in part by increasing density, revising building codes and building “green infrastructure.” Such sustainable and resilient cities have dense, mixed-use neighbourhoods built around commercial centers and public transit. New and retrofit developments include buildings that produce near-equal, equal or more renewable energy than is used on-site (see photo below) as well as buildings that integrate closed-loop water systems by using rainwater, surface runoff, greywater and wastewater recycling (see graphic above).

Green infrastructure, such as urban forests, ravines, wetlands and parks, can provide a broad array of ecosystem services. Networks of natural and constructed vegetative ecologies are spatially and functionally integrated at three levels: the house/building, the neighbourhood and the watershed. Existing natural ecologies are preserved and Low Impact Development technologies such as green roofs, porous paving and bioswales are incorporated into new or retrofit developments. 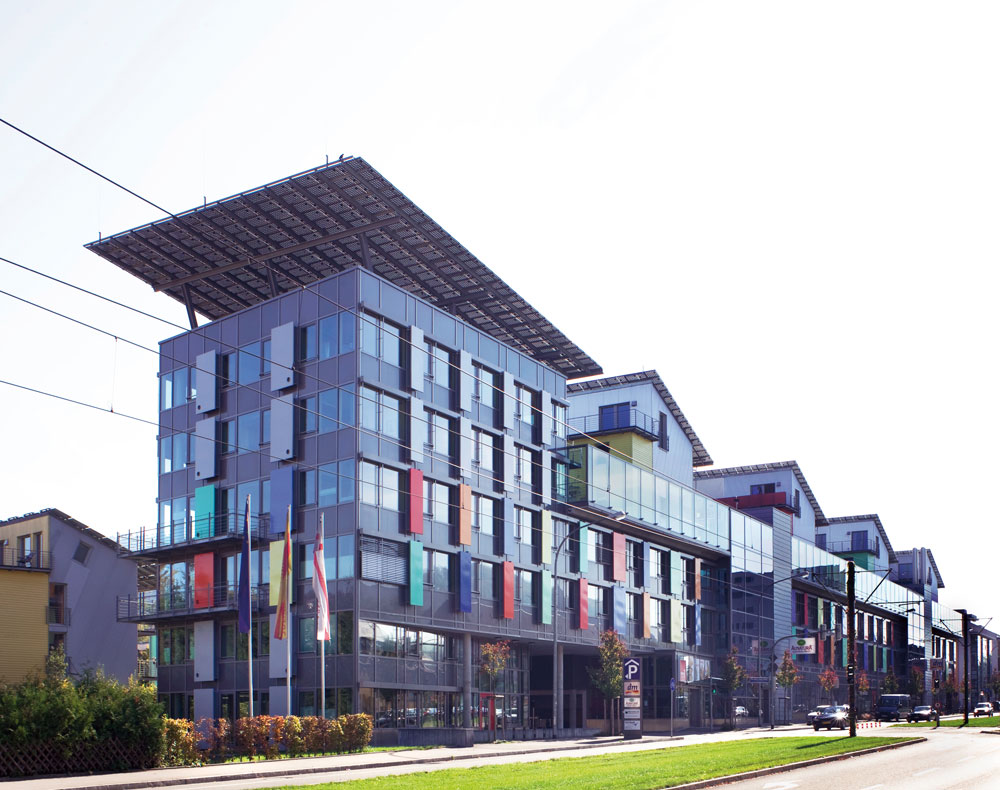 The Beddington Zero Energy Development (BedZED) in Hackbridge, London, is the United Kingdom’s first large-scale community designed to create zero carbon emissions. This has been achieved through the use of solar energy and district heating (networks of buildings heated from a central source), as well as the design of well-insulated spaces that allow for solar gain and have resulted in an 88 per cent reduction in heating requirements. Here in Canada, Dockside Green in Victoria, British Columbia, recycles water for reuse on-site, while Toronto’s Corktown Common functions as a flood protection park. Thanks to Toronto’s Green Roof Bylaw, over one million square feet of rooftops in the city have been outfitted, or are in the process of being outfitted, with green roofs. Two highly dense neighbourhoods in Sweden, Western Harbour in Malmö and Hammarby Sjöstad in Stockholm, are excellent examples of water and energy efficiency. In both neighbourhoods, stormwater runoff is captured and treated via landscape-based systems to reduce flooding, erosion and the degradation of natural waterways, while also contributing to fresh-water conservation. Energy is provided by locally produced renewable energy, including solar photovoltaics, solar thermal panels, wind turbines and geothermal heat. Biogas is produced via organic waste and used to heat homes and power vehicles. Other waste is recycled or incinerated for energy generation to heat buildings.

Although new green urban policies are emerging in Canadian cities alongside on-the-ground projects such as those listed above, most current building and construction developments are still piecemeal efforts. As urban form may be the single largest determinant of a city’s greenhouse gas emissions, it is crucial that Canadian policy makers step up and integrate comprehensive long-term planning for climate change mitigation and adaptation into regulations and policies for urban development.

Read the Centre for Climate and Energy Solutions’ report on Extreme Weather and Climate. How your city is preparing for climate change? Leave your comments below!

Liat Margolis is an assistant professor in the John H. Daniels Faculty of Architecture, Landscape and Design, and director of the Green Roof Innovation Testing (GRIT) Laboratory at the University of Toronto.