TAKEN AS a matter of simple logic, the notion of infinitely continued expansion of material demands on a single biosphere is nuts.

TAKEN AS a matter of simple logic, the notion of infinitely continued expansion of material demands on a single biosphere is nuts. 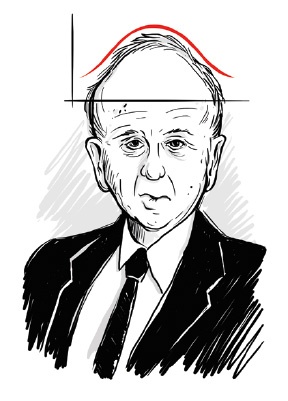 Nonetheless it is fiercely defended. That is because it underpins the prevailing character and aspirations of our national and global political economy. Deeply entrenched institutions, powerful interests and vulnerable dependents rely on it.

The typical defences rest on two strategies. The first is to deny the evidence of mounting ecological problems and unresolved social ones. The second is to argue that more growth will eliminate its own evils, perhaps even automatically.

The latter is easily the most enticing. It is much more magical than pulling rabbits out of hats. And it enjoys beguiling bits of supporting evidence that have been tied together in a pair of curvaceous hypotheses named for the great Russian-American economist, Simon Kuznets.

Back in 1955, Kuznets offered a cheerful theory about growth enhancing equity. After crunching the best numbers then available (and carefully noting their limitations), Kuznets reported that modern economic growth had been following an apparently standard pattern, whereby inequalities of income rose in early industrialization but fell thereafter as wealth increased.

This was the Kuznets inequality curve, an inverted U suggesting that after a rocky start the mechanics of market-driven growth would deliver continually rising wellbeing for all. Kuznets himself did not draw so simplistic a conclusion. Plenty of others did, and still do.

Unfortunately, better data after 1955 undermined the hypothesis. In recent decades, especially since Kuznets’ death in 1985, income gaps in the US and many other countries have been returning to those of the bad old days. The fairness improvements had been only temporary.

[The] Kuznets inequality curve [is] an inverted U suggesting that after a rocky start the mechanics of market-driven growth would deliver continually rising wellbeing for all.

Fans of the Kuznets curve idea nevertheless applied it elsewhere. In the early 1990s, the number crunchers identified an environmental version of the inverted U curve – with pollution increasing in the early period of modern economic development but falling later as rising economic wealth brought public pressure and technological capacity for emission abatement and other such initiatives.

The stalwarts defending unrestrained economic growth were delighted. The new findings promised a way to undercut the dangerously plausible green claim that growing human material demands – driven by some combination of population, affluence and technology – increasingly imperiled the biosphere and associated prospects for wellbeing.

In contrast, the environmental Kuznets curve suggested that growth was the solution to its own problems, that more affluence and better technology would be used to fix the adverse side effects of economic expansion. The truly faithful assumed the mechanism was both automatic and sufficient.

It was an attractive idea. But alas, the environmental curve also collapsed under careful scrutiny with better data and more variables. For a time, rising wealth in many places was indeed accompanied by abatement of noxious local emissions such as airborne particulates. Other environmental problems such as waste generation and greenhouse gas emissions, however, have almost always risen with wealth. Moreover, many environmental gains in rich countries have come from dirty industries moving to poorer countries.

And despite the evident advantages of greater financial and technological capacities, some poor countries have made environmental improvements while some rich countries have weakened long-established protections.

In the end, increasing wealth can be helpful in efforts to improve equity and stewardship. But there is no guarantee, no evidence of a reliable causal link and no automatic mechanism delivering greater equity or better stewardship. The big gains in those areas have been won through great effort, usually against determined opposition. And recent years have shown the gains can be reversed.

None of this should be laid at the feet of Simon Kuznets. He was notoriously careful to recognize the limitations of his data, and he was dead well before his name was recruited to polish the environmental curve.

The collapse of the Kuznets curves, however, is a big problem for the infinite growth crowd. Their only remaining strategy is to deny the evidence. That can only get more difficult.

University of Waterloo professor and the magazine’s long-time editor, Robert Gibson chairs Alternatives’ editorial board and writes our back-page column: What’s the Big Idea. He reads every word of every issue and can be thanked for the best – and the poopiest – article titles. Substitution gets us genetic engineering, nuclear reactors, ocean draggers and unconventional oil.