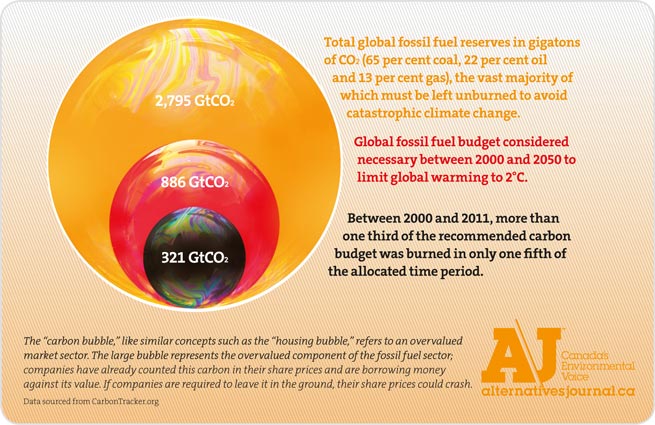 Investment managers are waking up to the fact that holding vast reserves in fossil fuel companies, especially for vital purposes such as pension funds, is an unacceptable risk for investors.

Investment managers are waking up to the fact that holding vast reserves in fossil fuel companies, especially for vital purposes such as pension funds, is an unacceptable risk for investors. In April, the London Stock Exchange-owned FTSE Group announced a series of market indices – economic measures of the value of sections of the stock market – that completely omit fossil fuel companies. FTSE says these indices point the way to a total exclusion model for fossil fuel-linked stocks.

Divestment campaigns have previously been used to put pressure on companies perceived to be engaged in socially undesirable activities such as tobacco, munitions and apartheid South Africa. The non-profit group 350.org launched a massive fossil fuel divestment campaign in 2012 that has been taken up by students on hundreds of college and university campuses across North America, as well as by some faith-based communities. The issue motivating campaigners in these cases is generally a moral one.

Growing concerns about greenhouse gas emissions and the consequences for global warming have spurred institutional investors to question their exposure to fossil fuel-linked stocks for more pragmatic reasons. Multinational investment managers such as IMPAX, HSBC, NRDC and BlackRock – the largest asset manager in the world – are concerned about the possibility of “stranded assets” and a “carbon bubble.”

Analysts are paying attention to research by the Carbon Tracker Initiative, which has calculated that 80 per cent of the world’s proven fossil fuel reserves must be left untouched to prevent catastrophic climate change. Since fossil fuel company share prices are based on their entire proven reserves, leaving most of this oil and gas in the ground means their share prices are greatly overvalued, creating what is known as a carbon bubble. As fossil fuel companies continue to sink billions of dollars into developing new sources of fossil fuels, they risk stranding those assets and rendering them worthless.

Eliminating the fossil fuel company sector from a global benchmark index over the last seven years would have produced a positive return.

IMPAX released a white paper in 2013 speculating that eliminating the fossil fuel company sector from a global benchmark index over the last seven years would have produced a positive return. They also found that replacing fossil fuel stocks with energy efficiency and renewable energy stocks would have provided even greater returns.

The Stranded Assets Programme at Oxford University studies the effects that divestment campaigns can have on the financial wellbeing of targeted industries. The group concludes that while direct harm to the oil, coal and gas industries is likely to be minimal from divestment, the indirect harm from regulatory changes designed to limit greenhouse gas emissions could be significant.

Find green investing tools and learn the pros and cons of divestment in our economics section.