IMAGINE a solar-powered machine that filters water, moderates air temperature and regulates the climate. Some would call it an amazing feat of engineering genius. Most people call it a tree.

IMAGINE a solar-powered machine that filters water, moderates air temperature and regulates the climate. Some would call it an amazing feat of engineering genius. Most people call it a tree.

Humans have a history of overlooking the many ways by which nature supports us. In North America, pollinators are responsible for one in every three mouthfuls of food, yet we are allowing habitat decline and pesticide use to devastate their numbers. Ten per cent of the world’s fish catch comes from coral reefs, yet overfishing, pollution and sedimentation have destroyed or degraded one-third of these underwater gardens.

When it comes to sustaining biodiversity, our track record is not very good.

By 2010, the International Year of Biological Diversity, we were to have seen a significant reduction in global rates of bio- diversity loss. This target was adopted in 2002 by the signatories to the Convention on Biological Diversity (CBD). But there has been little progress, and CBD officials concede that “most of the direct drivers of biodiversity loss are projected to remain constant or to increase in the near future.”

A substantial barrier to progress has been pervasive ignorance of our economic, social and biophysical dependence on biodiversity. If there is any light on the biodiversity horizon, it is that now people seem to better understand that biodiversity is crucial to our well-being.

More often than not, biodiversity is considered to be a matter of protecting endangered species, especially polar bears, whooping cranes and other media darlings. This is how diversity is treated in the best-known monitoring programs and in most species-at-risk legislation. In contrast, modern science and the CBD recognize three aspects of biodiversity: diversity among species; genetic variations within individuals and populations; and ecosystem diversity, which includes the ways organisms interact with each other and the non-living world around them.

Each aspect of biodiversity facilitates the functioning of an ecosystem. In Canada’s boreal forest, for example, species diversity builds resilience to disease and invasive plants. Genetic variation gives forest species the capacity to adapt to changing environmental conditions. These, in turn, combine with the cumulative interactions of forest plants, animals, air and soil to produce the air we breathe, filter the water we drink and absorb the carbon we produce in order to mitigate the impacts of global warming. If the boreal forest is to continue providing these essential “ecosystem services,” it requires diversity of species, genetics and ecosystems.

Diverse, natural forests are especially good at delivering ecosystem services. But while a tree plantation may produce timber, paper, biofuel and other commodities, its marginal biodiversity limits disease resistance, soil production and, ultimately, its ability to sustain production over the long term.

Shahid Naeem, professor of Ecology at Columbia University, studies the role of biodiversity in ecosystem functioning. “The greater the biodiversity one finds in forests, farms, fisheries, parks and even urban ecosystems,” says Naeem, “the more services they will provide and the more resilient they will be to environmental challenges such as global warming, fires and floods.” In other words, he adds, “the more diverse our world, the more productive and stable it will be.”

This understanding of biodiversity is the central idea behind the CBD. Ratified by 193 countries at the Rio Earth Summit in 1992, the CBD aimed not just at species preservation, but also at biodiversity protection for the survival of all life, and the adoption of more sustainable approaches to resource management and use.

Unfortunately, drafting the accord was the easy part. “In reality, international environmental instruments all tend to be non-binding,” explains Eleanor Sterling, director of the Center for Biodiversity and Conservation at the American Museum of Natural History. “Policy at the national level will tend to relegate environmental issues to a lower priority, due to a perceived independence of environmental issues from other pressing policy areas such as health and economic development.”

To clarify how crucial biodiversity is for human well-being, a team of over 1300 leading natural and social scientists compiled the planet-wide 2005 Millennium Ecosystem Assessment. The findings highlighted the accelerating rate at which humans are appropriating the planet to provide livelihoods and economic goods. Much of what is left over is made up of open oceans, deserts and ice caps. Few intact ecosystems remain to provide necessary provisioning services, such as soil formation, climate stability and recreation.

As the 2010 targets slide by, small victories are vastly out-weighed by decline. Shrinking populations and rising extinction risks are indicative of deeper losses of ecosystem functions, driven by increases in land conversions, consumption levels and indirect pressures including climate change.

How Diversity Allows the Boreal Forest to Provide Ecosystem Services 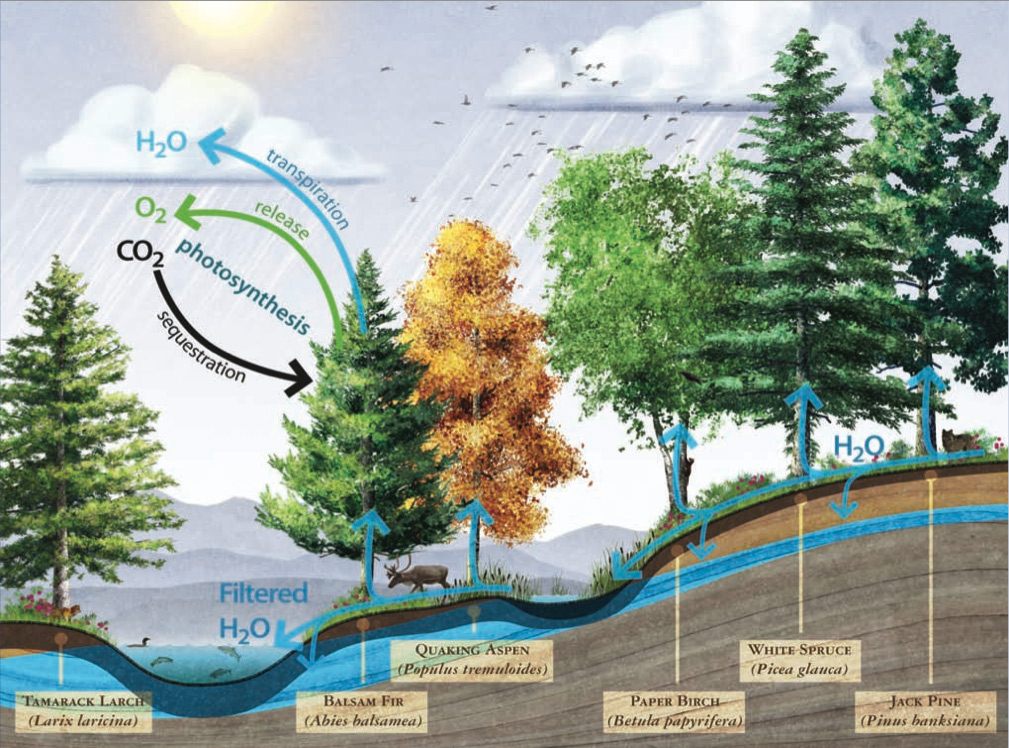 Optimal ecosystem function requires that all facets of biodiversity are healthy and in balance. In this example, having diversity among species builds resilience. Genetic variation within species helps them adapt to changing conditions. Also, the ways organisms interact with each other and the non-living world around them provide ecosystem services that are essential to life and worth billions when measured in dollars. For instance, wetlands store vast amounts of carbon in the underlying peat; carbon is also sequestered by trees during photosynthesis; and water is purified as it percolates through the water table. The quality of life for all animals, humans included, is diminished when biodiversity is compromised.

There is good news, however. The Millennium Ecosystem Assessment emphasized that biodiversity is the foundation for ecosystem services, and stressed that ecosystem services are, in turn, critical to the sustainable production of goods and life-support systems. It encouraged valuing the environment as a service provider. The result is a proliferation of new strategies for conservation that are attracting the attention of businesses, non-environmental government agencies and other groups not traditionally associated with conservation.

Some initiatives treat ecosystem valuation as a basis for generating incentives for conservation. Among the many “payment for ecosystem services” schemes, perhaps the best recognized are carbon markets. The idea is that if a nation or company exceeds a set CO2 limit, emissions can be offset by paying a landowner elsewhere in the world to maintain a forest and thus the carbon it sequesters.

Ecosystem valuation illustrates the importance of ecological infrastructure even if money does not change hands. In 1997, Nature published a landmark scientific paper entitled, “The value of the world’s ecosystem services and natural capital.” It estimated the global value of the world’s ecosystems to be roughly twice that of the global GDP. While deriving such an estimate involves using some debatable assumptions, the message is simple: ecosystem values are enormous and if environmental costs (and benefits) were included in the price of commercial goods and services, land-use and consumption decisions would be quite different.

Ontario’s Greenbelt Plan acknowledges that maintenance of quality of life and health for the most densely populated part of the country depends on preserving ecological services. Wetlands, watersheds and farmlands, the very things destroyed by urban sprawl, prevent floods, cleanse water and contribute to local agriculture. It’s estimated that Southern Ontario’s greenbelt provides upwards of $2.3-billion per year in ecological services, and this should influence decisions to convert the landscape into housing, commercial and industrial lands, and transportation corridors.

As the greenbelt example suggests, it is important to consider the cost to replace ecological services caused by land-use changes. However, ecological valuation raises concerns related to the practicality and ethics of monetizing nature. Undervaluation of ecosystem services and the degree to which nature can be subjected to market forces are both matters of debate. Consequently, many research projects do not assign an explicit monetary value. The aim is to provide more complete information for people who make resource management decisions and to improve the tools they use in analyzing their options. 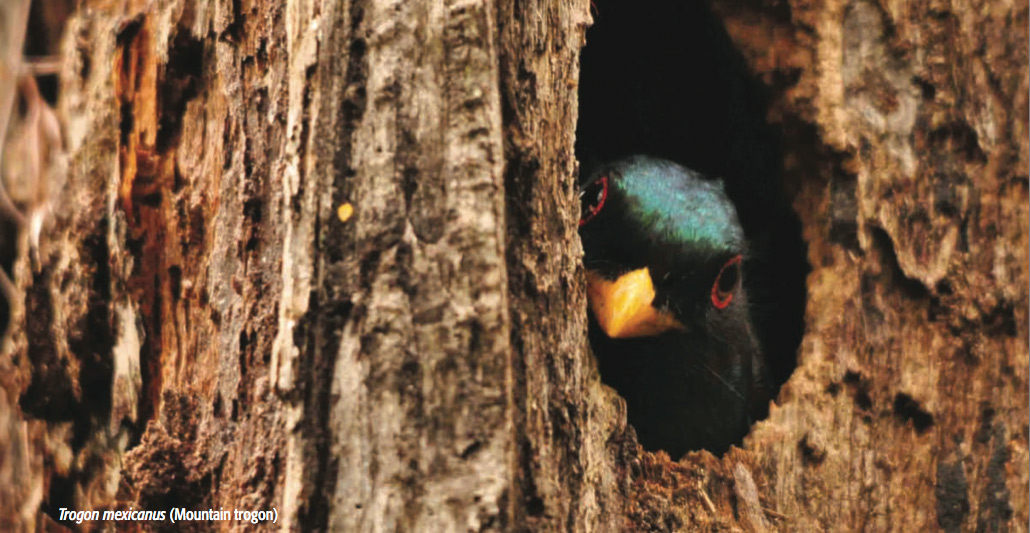 “By considering where activities occur and how their impacts may influence or reinforce one another,” Chan explains, “we can learn where development is more appropriate, or target the most critical ecosystem services to conserve and restore. It is a complex picture, but one that can ultimately improve coastal management.”

As one of an increasing number of researchers who are addressing ecology-economy connections, Chan is optimistic. But he acknowledges that changing the way we manage natural resources is not easy. “Governmental capacity to operate across agencies is likely limiting progress more than a lack of tools or data to address these issues,” he says.

Eleanor Sterling sees people at the centre of efforts to protect biodiversity. “We talk about institutions and government as if they are not in essence driven by everyday decisions of people,” she says. “But they are, and therefore conscious decisions that take into account principles of adaptive management and system-wide thinking are critical to our healthy future.”

Across Canada, individuals and agencies are beginning to embrace the concept of ecosystem services. Collectively, we must remind leaders that nature is an asset we cannot afford to take for granted.

Paige Olmsted is a research associate at the Center for Environmental Research and Conservation at Columbia University’s Earth Institute.